Did you think that all of our downstairs organizing was the extent of my nesting horomones? Nope. We redid our entire upstairs, all for this new little guy who will be arriving Thursday morning. Let's start with the boys' room. I have to put the apostrophe after the "s" now, because this room no longer belongs to just one boy. 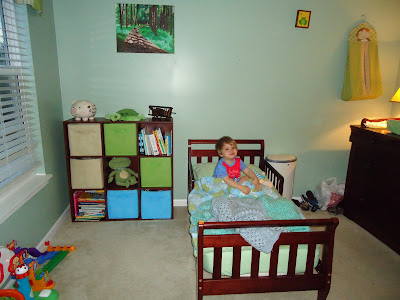 Here's Nick sitting on his new big-boy bed. His doll is next to him, and you can see the changing table/dresser on the right. Those drawers will now be for Nick's little brother. Instead of buying another dresser, which would've been prohibitively expensive, I got this storage cube thingie from Target. It's anchored to the wall, so he can't pull it over on himself, but he can pull out the fabric drawers to get access to his clothes. My eventual goal is to take a picture of each kind of clothing, laminate it, and then velcro it to the outside of the fabric box, so Nick can learn where to find socks, shirts, pants, pajamas, etc. Then again, this organizing bug will probably leave me as soon as this kid is born, so my picture idea may never come to fruition. 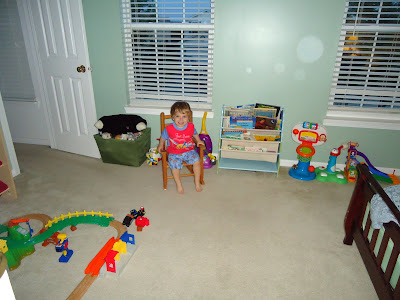 Moving to the left, you can see that Nick's book rack ($20 at http://www.napervilleyardsales.com/ last year) has been moved upstairs. Grandpa Mike and Grandma Patty brought him his own rocking chair last week, so he has a place to sit and read. We had enough floor space to set up Nick's train set in his room on the floor. The door you see open is the walk-in closet, which Nick will still be sharing with his daddy and (now) his little brother, too. 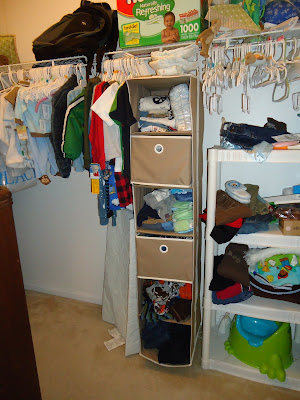 Nick has so many clothes that I had to buy this fabric organizer for out-of-season stuff. All of his winter pjs, jeans, and sweatshirts are in here for now. The shelf holds random baby items that we're not sure if we'll use yet. I didn't take a picture of the five giant-sized boxes of diapers (sized newborn through 2) on the other side of the closet, but I'm sure you get the picture. You can see the 1,000 pack of baby wipes, though. We're stocked, but I'm sure we'll be out in a few weeks. It's so easy to forget the days of going through 8-10 diapers every day. 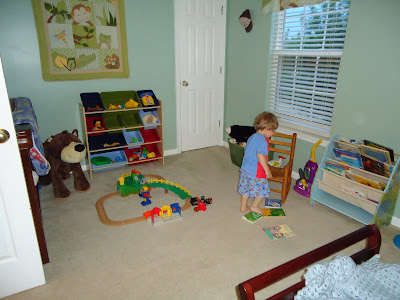 For toy organization, I bought one of those bin organizer thingies, also at Target. I'm figuring that once our new little boy starts moving around, we're going to have to keep him away from some of Nick's smaller toys. The solution? Keeping those toys in the bedroom. I'd love to attach pictures of which toys go where, so Nick can learn to clean up. We'll see if that happens. While the crib is still in here (behind the door on the far left), our little guy won't be able to escape it for some time. In fact, we probably won't even have him sleeping in the crib until he's sleeping through the night. He'll be in a bassinet in our room until then. 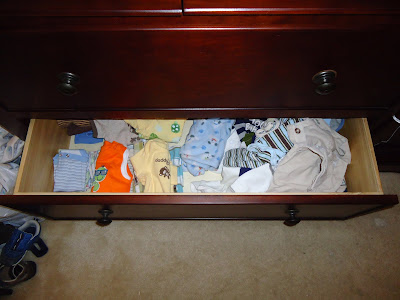 I've gone through all of the baby clothes in sizes preemie through ﻿6 months, folded them, and organized them. This is not normal behavior for me. I've also spent a lot of time and money hunting down adorable summer newborn clothes on ebay, because many of Nick's baby clothes had snowmen and reindeer on them. They were also long-sleeved and fleece, which just won't cut it in June. I did find some stuff I could salvage, though, and everything is clean and ready. . . just waiting for the baby.
﻿ 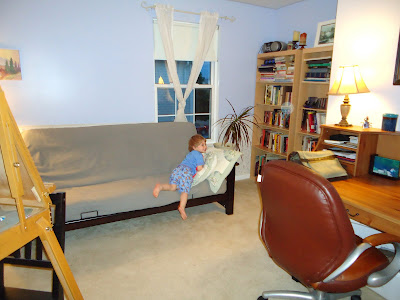 Onward to the loft. Grandma Toni used to sleep in a full-sized bed in Nick's room when she spent the night. She spends every Tuesday and Wednesday night during the school year with us and needs a comfy place to sleep. We bought her this futon, complete with a real (upgraded) mattress, not one of those foam thingies, and she's been pretty comfortable so far. You can see Greg's easel to the left. He has dreams of painting again this summer. I hope he finds the time. Oh, and one of my classroom plants is next to the window. I'm crossing my fingers that the cats won't eat it. 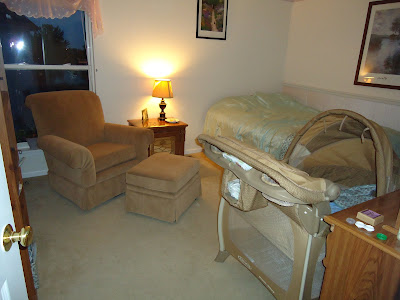 In about a week (when I'm discharged from the hospital), our bedroom will become baby central. Thank goodness we have a fancy bassinet/pack n' play with a diaper changing station. We also moved the rocking chair and ottoman into our room, so we can actually, you know, rock the baby at night. Our bedroom is kind of small, but this will work for the summer. Hopefully by fall this little man will be sleeping through the night, in his crib, with his brother. (Hey, I can have dreams, right. It is possible, though not likely, that I'll have a second child who sleeps through the night consistently at 8 weeks.) 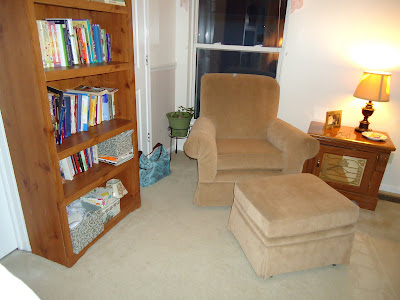 The rocking chair is actually very comfy. I use it for reading sometimes, when not rocking babies. Notice another of my classroom plants next to the window. It's more likely to survive in here, where cats are forbidden, because I'm allergic (to cats, not plants). You'll also see my new diaper bag, packed and ready to go to the hospital. I am bringing outfits in preemie, newborn, and 0-3 month, all because I have no idea what size this little guy will fit into. Nick was in preemie clothes for several weeks, but the OB estimated that this baby will be at least 7 pounds, so the newborn stuff will probably fit him better.
Either way, our house is ready for baby. As for me, I'm ready to not be pregnant anymore.
Posted by Melissa E. at 10:00 PM