I've thought deeply about the best ways to get Nick ready to be a big brother. For months now, he's talked about the baby in my tummy. It still isn't really connecting, though. I've heard that it helps if you give a child a doll before the baby is born and show them how to take care of it. We decided to give it a try. 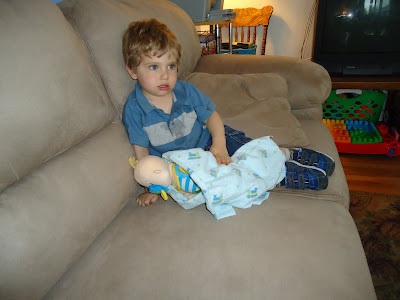 Do you have any idea how hard it is to find a baby doll for a little boy? Everything I found was pink and explicitly designed for girls. But I was determined. Nick has carried around his Elmo doll for some time now, so I know he would be interested. Even though Nick is a very boyish boy, he does cuddle his stuffed animals and talk to them.

Still, doll hunting was an exercise in frustration. I finally found this one on Amazon, and his name is baby Sam.  I think he's rather cute, just the right size, and appropriate for a little boy who will be having a brother soon. 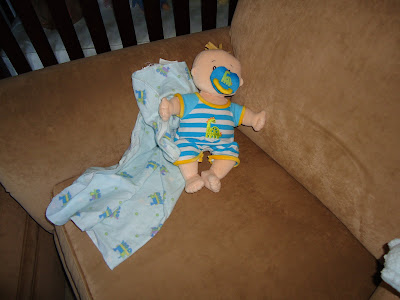 He comes with a removable binky that connects to his mouth, and a dinosaur onesie and diaper that both fasten with velcro, so they're easy to get on and off. I also gave Nick a baby blanket just for his doll. 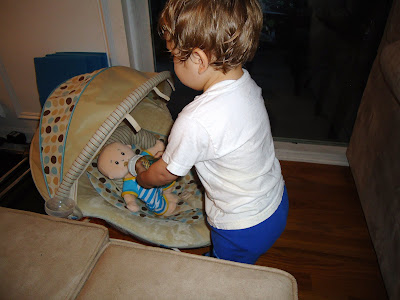 I decided to let him play with a real baby bottle so he could feed his baby. We showed Nick (using Sam the doll) the bouncy seat and bassinet where his new brother will sleep. Nick fed Sam a bottle, and covered him with a blanket. 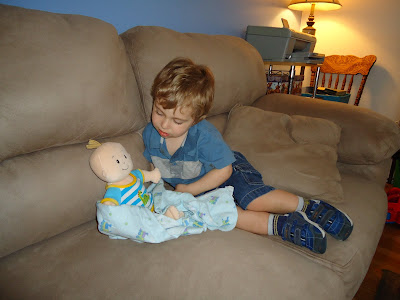 Nick's doll has been sleeping in his bed with him, and he likes to cover him up and take his binky in and out. I'm thinking this doll will be perfect for when the baby comes, because Nick loves to copy us--when Greg sweeps the floor, Nick has his own little broom. When I garden, Nick has his own little shovel, rake, and gardening gloves. So we figure he can feed his baby and even change his diaper.

We'll see if this helps with the transition to big brother. Nick sure seemed interested, although I'm sure he'll be more interested once his brother comes along. I've also started making him a shutterfly book (a story about him) with all of his baby pictures, so he can see what he looked like as a baby and as he grew bigger. I'm waiting to make the last page Nick holding his new brother.
Posted by Melissa E. at 8:33 PM