Under the Weather During Beautiful Weather

It's me who has been under the weather--Nick is just fine. I've been sick the last couple of days--since Monday, really, although I made it at work until Tuesday afternoon. It was some sort of horrible stomach or flu bug that finally ran its course. I suppose I picked really good days to be sick, though. The weather was amazing, and I was able to spend a few hours outside with Nick enjoying it. I do believe the fresh air helped me to feel better, although I needed to lie down again after only about 30 minutes outdoors. Check out the tree in the background--I love all of the white blooms. 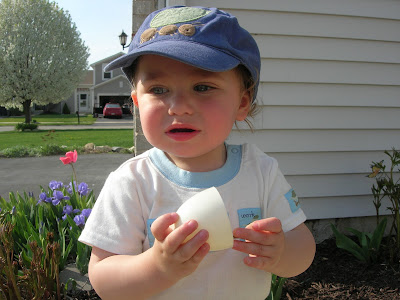 It's funny, but I think he somehow knew I was sick. Nicholas was really well behaved (for a toddler). When I was lying on the couch Tuesday afternoon, wracked with chills and trying to watch him play, he didn't throw a tantrum. Instead, he played with his toys and brought me books to read to him. Then he snuggled with me on the couch. Nick was pretty good all week, actually, and he didn't wreak too much havoc while I was recuperating. It's funny how that happens--I noticed it with my students at school, too, on Tuesday. I told them I wasn't feeling well, and they didn't give me any trouble and were extra nice. That's one of the reasons I like children. 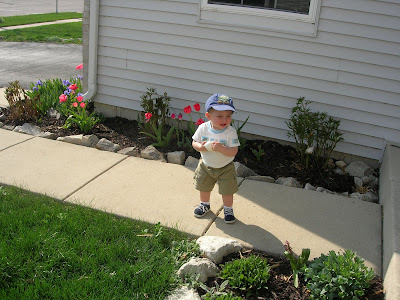 With the weather here in the 80s, Nick kept announcing "outside!" and pointing towards the door. He wanted to play outside, and I could only stall him for so long. Not that I really wanted to; I was perfectly comfortable sitting in the grass watching him poke things with sticks and run around. My spring flowers are looking really good so far. The tulips and irises (I think they're irises) are blooming, with more buds still to come, and the peonies are just starting to come up. Below you can see Nick giving you the tour. He's learned to say "Pretty," and he keeps pointing at trees and flowers and announcing just that. 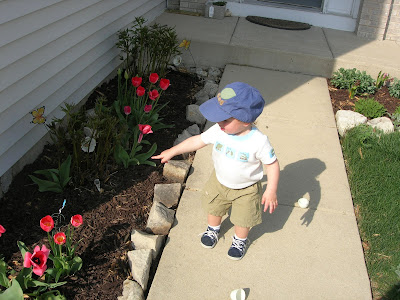 I just love perennials. They're nearly impossible to kill, come back no matter what, require very little work, and they can make my house look amazing even if I have no idea what I'm doing. The year I was pregnant with Nick I literally did not touch one thing outside, and I still got compliments on my "gardening" skills. Not too bad. 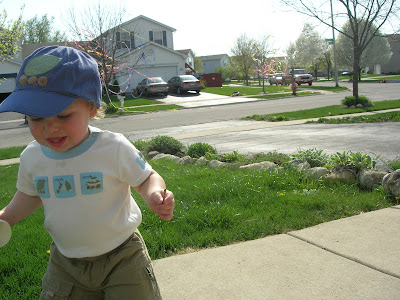 I love that Nick was able to wear shorts today. I'm also rather proud of the outfits I found him this year. I think I've learned my lessons about buying children's clothing. Now I buy everything online, and most of it is lightly used. I really like the clothes from Gymboree, but I sure can't afford to shop there. So instead I buy the outfits from other people's kids who have grown out of them. This little outfit consists of an ant motif with "work, work, work" on the front. The hat matches, as do the socks and the cargo shorts. I have another onesie that goes with the ensemble, which is called "Botanical Babies," and cost me less than $15, with shipping. I believe that's a wood chip in one hand and half of a plastic Easter egg in the other.
Posted by Melissa E. at 9:05 PM