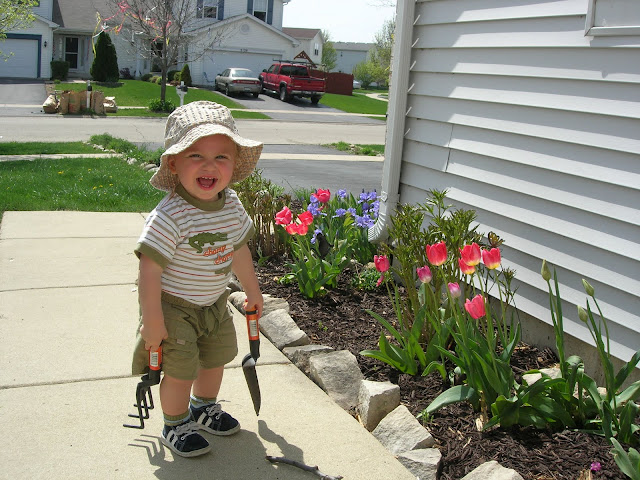 Nick loves to help me when I'm gardening. I've been working the last week or so to get the front yard and the sides of the driveway weeded and mulched. Nick likes to think that he's "helping," and he grabs the tools out of my hand everytime. I even bought some cheap plastic 99-cent tools so that it is safer when he steals them from me. Nick uses them to bang on rocks and plants. Today I was trying to repot some of my tomato seeds and Nick kept stealing the shovel and spilling potting mix all over the place.
He's also been doing better with keeping his hats on, too. Last year he'd rip them off fairly quickly and I couldn't keep them on him. This year I just ask him, "Nick, where does the hat go?" Then he'll put it on his head. Sometimes he tries to put it on my head, but my giant noggin is far too big for his baby hats. 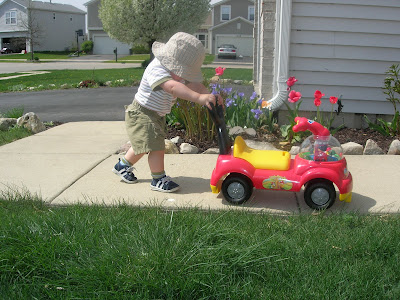 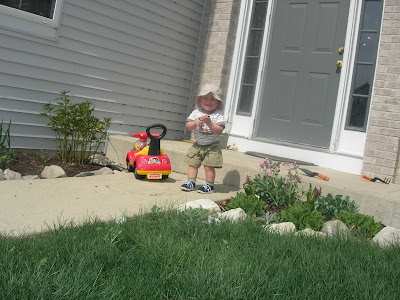 Pushing his little car around outside is a new joy now that it's been warmer. Notice how Nicholas has stolen my car keys and driven his car into the concrete step. Reminds me of when I first got my license. . .
He kept hitting the lock button on my car and making it beep, too. I double checked before we went in to make sure he hadn't popped the trunk. A few months ago, he popped my trunk while playing with my keys and the little light in the trunk must've run down the battery, because it was dead the next morning. So I'm really careful to check now everytime he plays with my keys. 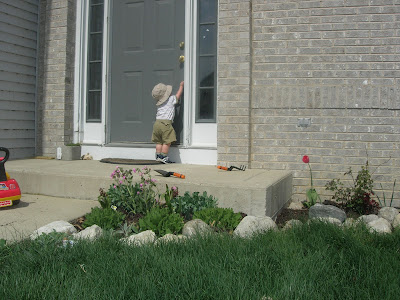 I don't think you can see, but he had my keys in his hand and was pretending to open the door with them. It's funny how much he copies us.
Posted by Melissa E. at 9:22 PM