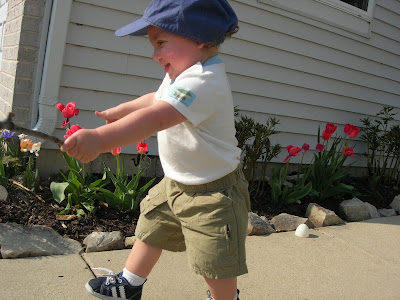 It must be a "boy" thing. Something about a nice stick just lying there on the ground inspires a young man to pick it up and swing it around wildly. Even a 1 year old knows how to start a mock sword battle with a stick.

Nick observed the little boy next door (he's maybe 8 or 9) playing Star Wars a few days ago with his friend, and he was enthralled. The light saber battle was incredibly exciting to him. Nick even tried to join in the fight with his own stick, running madly toward the battle with a shriek of sheer glee.

A few days later, Nick picked up the stick and instantly remembered what to do with it. There were no adversaries around, but that was okay for him. Nicholas fought his imaginary fencing battle across the yard.

I guess you can't argue with biology. My little man is definitely, well, a little man. He loves to push trucks around and make "vroom" sounds, and then bang them into things. Knocking down towers is loads of fun for him, and Nick thinks it's hilarious when his daddy fakes injuries. And now he likes to use sticks as weapons. Typical. My son already has a longer attention span than I do when it comes to things like basketball games. 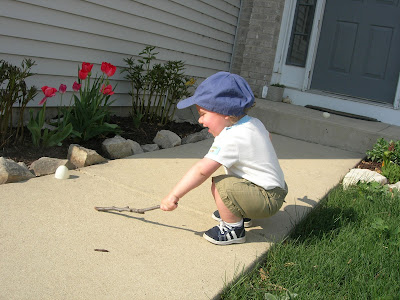 I'm actually okay with Nick being into the "guy" sorts of things. I'm just trying to keep it balanced. I love how he also likes to steal the broom from the kitchen and pretend to sweep. I like the way he hugs his stuffed animals (when he's not whacking them with sticks) and gives them kisses. Most of all, I adore how Nick insists on sitting on the kitchen floor when Greg or I cook, stirring imaginary ingredients in a bowl.
Nick can be whatever type of guy he wants to be, but I want to make sure he's a well-rounded gentleman, just like his daddy. Greg is an excellent cook, and he cleans more than I do. We've probably each changed about the same number of diapers, because we divide up child care responsibilities. Our little family certainly doesn't follow traditional gender roles, and I'm hoping Nick doesn't grow up with strict ideas about what mommies do and daddies do. When Nick finds a stick, though, the caveman in him comes out, and he's all boy. Frankly, it's rather cute.
Posted by Melissa E. at 8:34 PM