An unseasonably warm day (80 degress plus!) brought our little family to Brookfield Zoo on Thursday. We learned that a lot of other people had the same idea during our 45 minute wait in the traffic jam leading up to the zoo. It was still a great day, though. . . Nick spent all of his time pointing. He saw and appreciated nearly all the animals, and he tried to categorize them as either fishy (if it was swimming), birdy (if it was flying), or kitty (if it walked on the ground and had fur). Not bad for 16 months. The lion, of course, was a kitty. 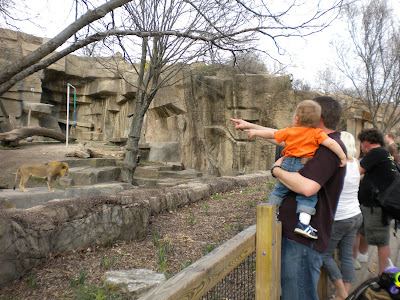 When I say that a lot of other people were at the zoo, I'm not kidding. We actually ended up parking on the high school fields (baseball, I think) backing up to the zoo. It was crazy busy, but luckily, we have a membership to Brookfield Zoo, so we didn't have to wait in the long ticket lines. Check out the crowd, though: 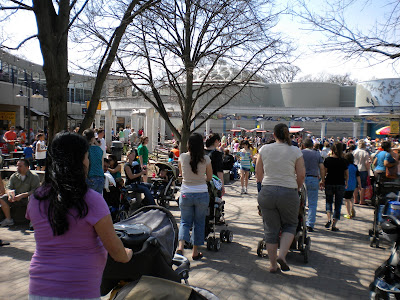 Yeah, it was a little bit crowded. It's funny how being in that large of a crowd makes me strangely okay with my body. I also feel like my child is relatively well-behaved, in comparison. There certainly were lots of people everywhere. The zoo is big enough, though, that there were plenty of parts that weren't as crowded. We did have to make full use of the baby leash, though. In the swamp, Nick and Greg took a boat ride, and Nick kept trying to crawl over the benches. 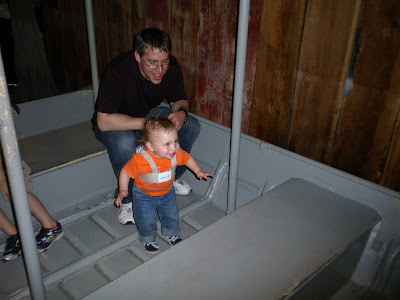 Pardon the poor quality photos. I have many skills, but photography is not one of them. It is very hard to angle pictures to get both a child and an animal in the same shot. Nick was pointing at the birdies here. He really likes birds, and he'll follow them with his finger through the sky. 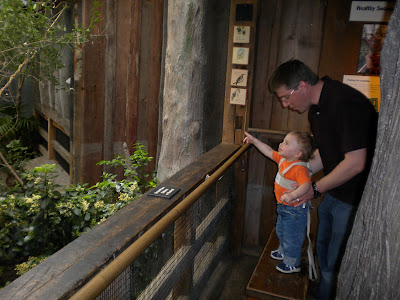 I am tired now, so I will post more tomorrow. I have to say, though, it is so much more fun taking Nick to the zoo now that he is so very interested in everything around him. That is one curious guy.
Posted by Melissa E. at 8:53 PM