My husband is awesome. 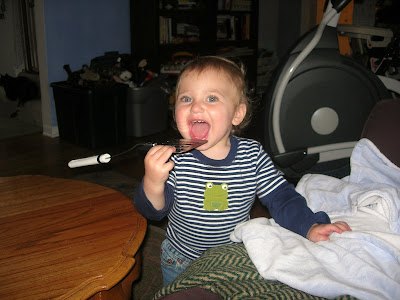 Man, can he cook! Can you tell that Nick thinks so, too? Look at what he cooked us for dinner last night from his Williams-Sonoma Cookbook. It was absolutely delicious. My mouth is still recovering from the taste sensations. Plus, I got to have leftovers for lunch today, and the rest of the guacomole when I got home from work. I love when he decides to cook. 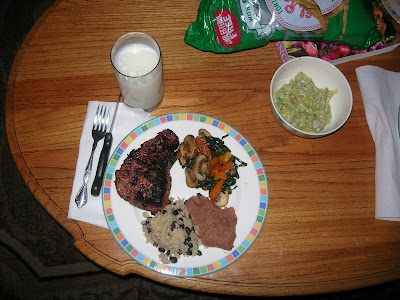 Above you can see our dinner (his manly portion--mine was smaller). We had carne asada (from rib eye steak) and grilled mushrooms, orange pepper, and green onions, grilled on a charcoal grill. He made homemade guacamole from scratch, brown rice with black beans, and refried beans, too. (You can never have too many beans.)

Greg and I have totally different ways of cooking, though. We can't even be in the kitchen at the same time. Greg is very meticulous, and he measures with exacting throughness. He has mastered making brown rice and it comes out perfectly every time. He uses recipe books and does not substitute. Dicing and measuring all of the ingredients neatly in little clear bowls, Greg cleans as he goes. Often, it looks as if he were on one of those cooking shows, with everything laid out neatly, in the order that it will be used. Greg cannot handle if I come into the kitchen for a glass of milk while he's making dinner. He prepares dishes for one meal, sometimes two, without regard for how many leftovers there will be. In fact, before we started living together, he used to shop for groceries on a daily basis, filling one grocery bag with the ingredients for one recipe, cook dinner, and then dispose of the leftovers. Thank goodness he'll eat leftovers now.

My cooking, on the other hand, is far more haphazard. I am a multitasker, and often cook dinner, talk on the phone, make bread, watch Nick, and listen to NPR all at the same time. This has resulted in some interesting mistakes. . . I still can't make brown rice without screwing it up. While I sometimes start with a recipe, I change proportions, double a recipe, and substitute ingredients. I also love to throw extra stuff into everything. For example, I'll toss spinach into any dish. I also definitely do not clean as I go; the kitchen is often trashed after I have made our evening meal. Eyeballing instead of measuring, I've been known to either totally screw up a dish or come upon something marvelous by accident. I've had spaghetti stuck to the wall and I somehow got banana puree on the ceiling. I also cook for an army--I enjoy leftovers and I feel that if I have to go to the effort to cook and mess up the kitchen (and I do mess up the kitchen), I should get a few meals out of it.

I suppose, though, that it is a lucky thing that we both cook. Greg and I enjoy healthy recipes, but also international foods and experimentation. We just can't both be in the kitchen at the same time. I wonder who Nick will take after in the kitchen?
Posted by Melissa E. at 9:16 PM