Spaghetti Fun and My Snowy Nightmares 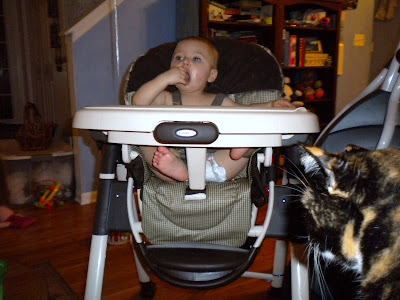 So first, the spaghetti fun. As you can see, Nick enjoyed his first taste, and his second, although by his third taste, he was dumping it all over himself. Greg has been on a cooking kick lately, and he tried this great Italian recipe (Spaghetti with Boullinaise Meat Sauce) last weekend. I figured Nick was old enough to try spaghetti, but I stripped him down to his diaper to avoid stains. (No, I'm not a cruel parent. It was 73 degrees in our house at the time.) Yup, Molly's been hanging around the high chair. The other day we fed him salmon, and Molly actually reached onto the highchair to steal a piece. Smart kitty. 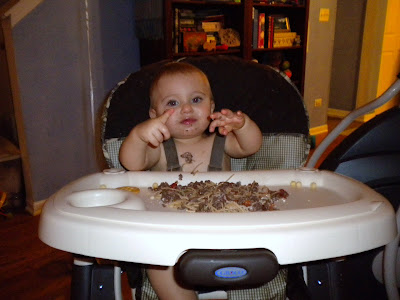 Nick has started pointing at everything lately. He's been jabbering more too. Still no official talking, but he's saying "daddy" and "kitty." However, we're not sure he knows what they mean, since he called me "daddy" tonight. We'll keep working on it.
Onward to the nightmare. I am afraid of driving in snow. Tonight there was light snow/sleet/slush, and we're due for more tomorrow. I think the snow was timed just right so that we won't get a snow day. Sigh. I think snow is lovely to look at, but when I know I have to drive in it, I start to get panicky. I've skidded and slipped enough to know that snow=danger. When I got into the car tonight, I had a death grip on the steering wheel. I know logically that it wasn't too bad out, but to me it seemed like I was driving on a sheet of ice. I literally drove no more than 25 mph the entire way home, which is why it took an hour and a half to get home. 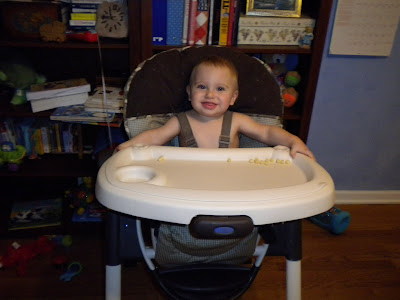 That's why I'm up writing this instead of sleeping. Fear. Fear of those tiny white flakes. I worked out on the elliptical trainer today, and it gives me this little burst of energy. I made a deal with myself; I will work out 30 minutes at least 5 days a week (pilates or elliptical) through the month of December, but not worry so much about what I eat. I'm not going to pig out, but I don't want to miss out on the holiday yummies.
So I had a cookie and sat down in front of the tv. That's when I checked the weather, and saw what the roads are going to be like tomorrow. Not enough snow for a day off, but enough to make my morning commute scary. Enough for nightmares and hyperventilation.
I'll end with this cute video of a messy, adorable Nicholas chatting and playing with his food. He actually ate quite a bit of it, this is just at the end of his meal.