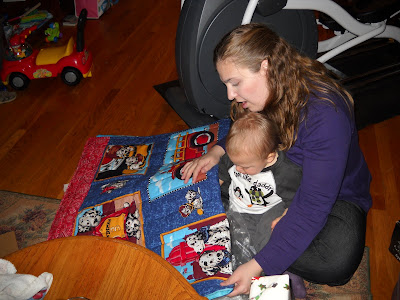 On the first day of Christmas. . . we had Grandma Patty and Grandpa Mike over, as well as Grandma Toni, who was up for seeing Nick open as many presents as possible. I love the t-shirt Nick is wearing. If you can't see, it has two penguins and it says "Cool like daddy." And he is. :) Note the adorable doggie quilt that Nick got from my dad and stepmom. I believe this was the first of over 40 gifts Nick received this year. What a lucky, lucky boy. 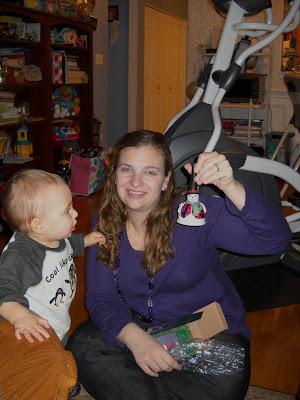 Since both of our parents are divorced, we have four Christmases each year. Nick didn't seem to mind all of the excitement, though. Note how he zeroed in instantly on the cute, eminently breakable snowman bell. That and the bubblewrap were more interesting than toys. :) 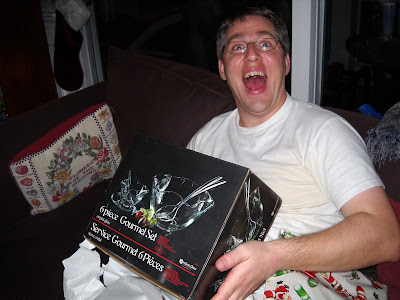 Greg was very excited about our new salad set. I can see why; we just dropped a grand on an elliptical trainer, and we will need lots of salad to go with the new healthy lifestyle. 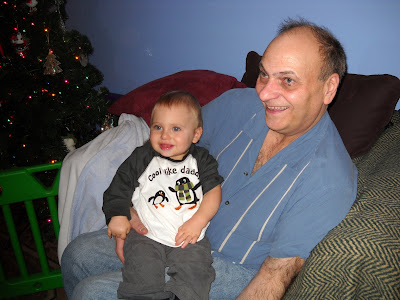 Nick was thrilled to see his Grandpa Mike, and even more thrilled with the cupcakes that they brought. My dad only had 2 girls, no boys, so his first grandson is obviously very special to him. 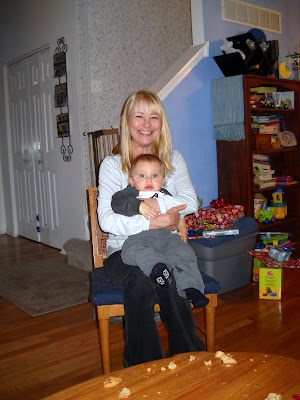 Here's Nick sitting with his Grandma Patty. Notice the crumby mess he left on the table. I believe he was eating chocolate chip cookies. They are one of Nick's favorites, just like his Grandpa Mike. 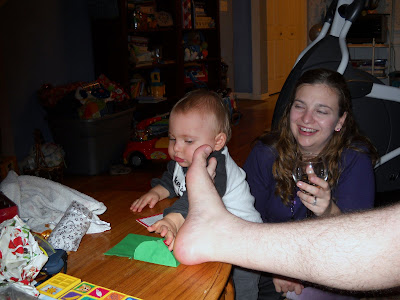 No, I don't believe we were tipsy, although it probably looks like that from the picture. Greg was blocking Nick from getting the envelope with his foot. Nick is always most interested in whatever is most forbidden/dangerous/delicate. 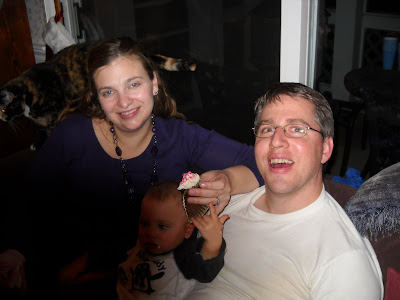 My camera takes really bad pictures, did I mention that? I think there is something wrong with it. Here is a family shot, and out of three, this was the best one. Nick was surreptitiously trying to sneak a bite of my cupcake. 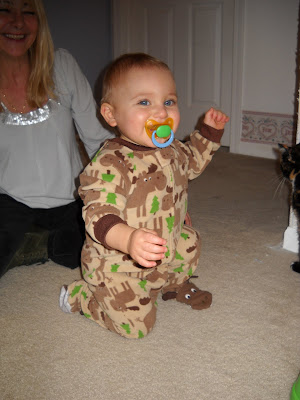 Before they left, Grandma Patty and Grandpa Mike played with Nick and our cat Molly up in the loft. I can tell what Nick is thinking: "As long as I entertain them, I won't have to go to bed!" He was right, too.
Posted by Melissa E. at 10:45 AM