Last year, Nick was only a month old at Christmastime, so he didn't get to meet Santa. But this year we decided he was big enough, so off to the mall we went. (On Dasher, On Dancer, On Chrysler and Visa. . .) Yorktown was pretty crowded, and the line was quite insane. Standing in line with an impatient 1-year-old for an hour and fifteen minutes is no fun. Add in thirty or forty other very young children, and what you have is chaos. Nick wanted to explore and interact with the other kids. 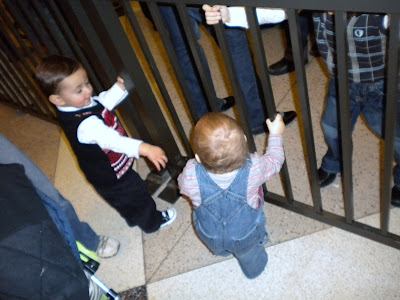 He does pretty well with other kids, although he kept trying to pull this kid's scarf off. But Nick was also very active, and he kept trying to crawl away. He also kept sneaking into other people's purses and bags, trying to grab sippy cups and crackers. I told him he needed to stop it with the pickpocketing, because they don't have a room in juvie for kids his age. Then he tried to eat crumbs off of the floor. Nick can crawl extremely quickly, and I kept having to abandon my spot in line to chase him around. Greg and I took turns watching him and shopping. I ended up getting Nick this handsome brown coat on sale at Gymboree for only $12. It's the one he's wearing on Santa's lap at the bottom of this post. I have a winter coat for Nick, but it's one of those great big puffy ones, and it's very hard to get his carseat buckled when he's wearing it. This new coat is much better, and it is stylin'. 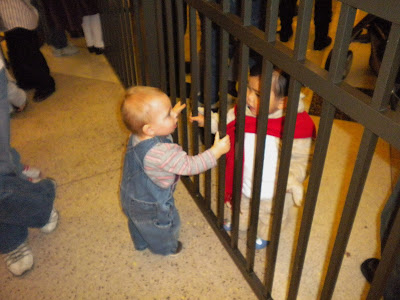 I was worried at how he would react, after seeing all four kids ahead of him cry hysterically when sitting on Santa's lap. I guess he did look pretty scary in his red suit, what with the huge beard and having made all the other kids cry. It was hilarious watching all of the parents dance around trying to get their kids to stop screaming and smile. They looked like dorks, but then again, so did we, I'm sure. 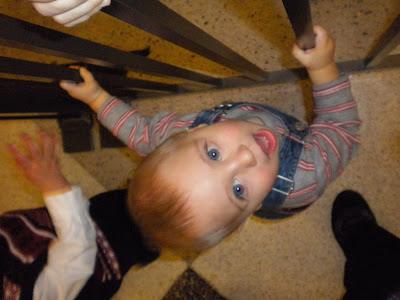 When we finally got to the head of the line, Santa asked me if I wanted Nick to keep his coat on for the picture. "Sure," I replied. "It's more wintery, and besides, you're wearing your coat, too." I suppose I shouldn't be so mouthy to the guy with all of the presents. Nick was a little wary of this strangely dressed bearded man, but the sight of Greg and I dancing and waving in front of him managed to coax out a smile. I'm pretty pleased with the final result, even if it was overpriced. My kid actually smiled and looked happy to be on Santa's lap. I wonder what he asked for. . . 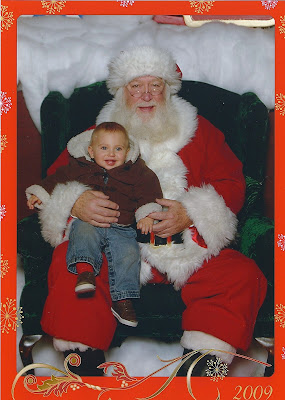