Henry and I arrived home on Sunday, and neither one of us has left home since. Per doctor's orders, we're keeping him inside with only "light activity," whatever that means. I've been racking my brains trying to think of fun, relatively quiet activities that we can do to keep Henry and Nick busy. Christmas decorating seemed like a good idea, especially since it required very little movement.


He did eventually hang up the ornaments on our felt calendar. My mother made this calendar by hand with felt pieces when my sister and I were very young, and I can remember arguing over who would get to hang up which ornaments. My boys did fight over who would hang ornaments on the tree.

It's funny how, since his surgery, Henry can be slap-happy one minute and then just put his head down, exhausted, like in the picture below. As for Nick, I think he liked his Lego Advent Calendar (a gift from Auntie Mandy) the best of our Christmas decorations. 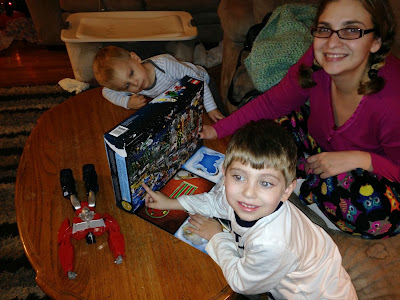 Though Nick has gone to school and Greg to work, Henry and I haven't been out of pajamas since coming home from the hospital, though the pajamas themselves have changed numerous times, usually due to Henry throwing or spilling food and medicine on us.


I know I've been getting exercise through using the dreaded "squirter" to administer Ibuprofen and Tylenol with Codeine (piggybacked, when necessary). My younger son has quite enough energy to run and fight like a wildcat when it is medication time, even if those medications are keeping him comfortable. We've also been adjusting to Henry's liquid diet. He's had tons of greek yogurt (only the green, lime flavor, strangely enough). We've also had lots of stories. 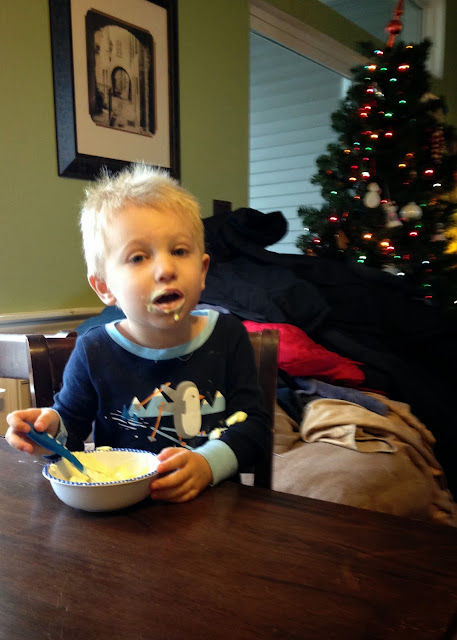 I've also learned how to puree all kinds of things. I made Henry a liquefied oatmeal with baby food prunes. He even ate some!

I've talked to the nurses at the doctor's office and the hospital several times, as they've called frequently to check up on his condition. We're checking for fever, hydration, and the possibility of infection. They've said it has been okay that Henry's been sleeping more than normal, and not to skimp on his pain medication. This is what it does to Henry.

Every time I look in Henry's mouth, I can't believe how many stitches are in there. Our surgeon did some really miraculous work, and I'm hoping it looks more painful than it is for my little man. We invented a quiet game where the boys lined up books on the floor and drove cars on their makeshift "road." 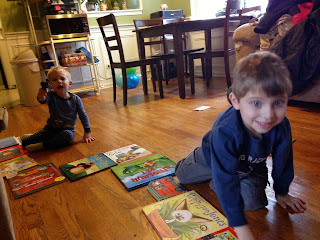 I think Henry has spent more time in my arms in the last few days than he has in months. When he's hurting, all he wants is his mommy. I'm very glad I've been here to comfort him.
Posted by Melissa E. at 6:04 PM