Henry's shirt is very ironic today. It reads, "Slugs, Snails, and Puppy Dog Tails." I took the boys to the park, and they got more dirty than they've been in quite awhile. 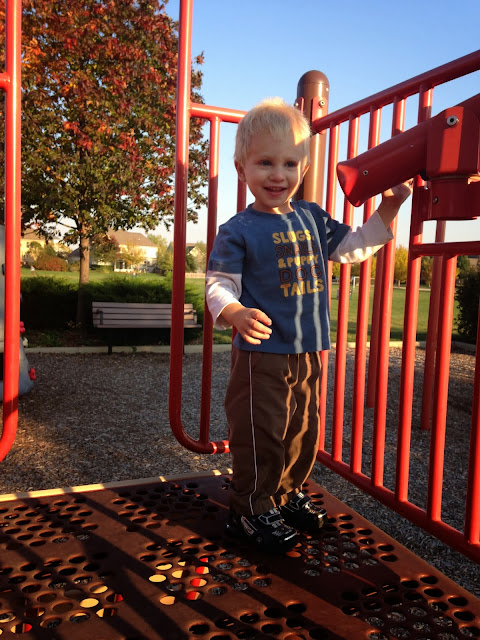 There is a sand pit at this park. My boys love sand, but I hate cleaning it out of their orifices, so I usually don't pick parks with sand. Today, I tried to head them off at the pass by making them take off their shoes beforehand. 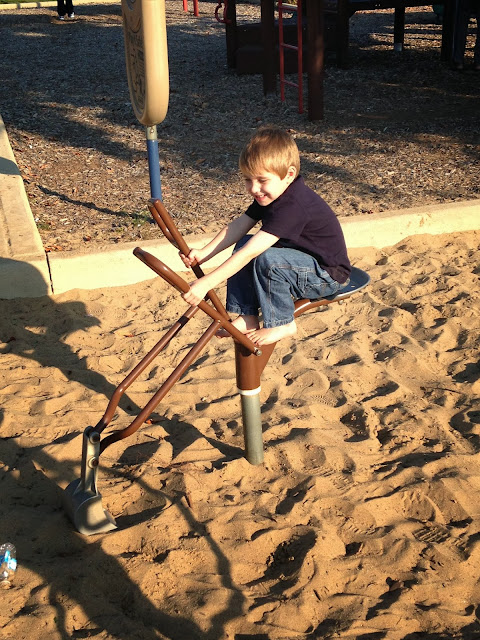 Neither one of my children has a super-long attention span, though, so after three separate times of helping them get shoes and socks on and off, I just gave up. I wonder if all boys attract dirt this easily or if mine are somehow gifted at dirtying themselves. 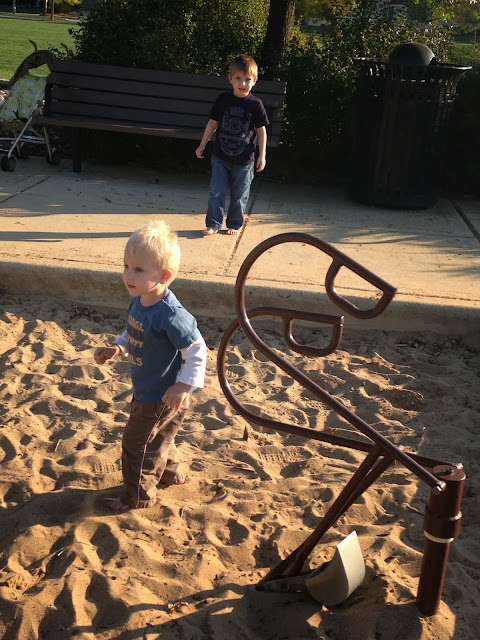 Climbing excitement was the order of the day at this park. Nick was rather proud of climbing to this summit. 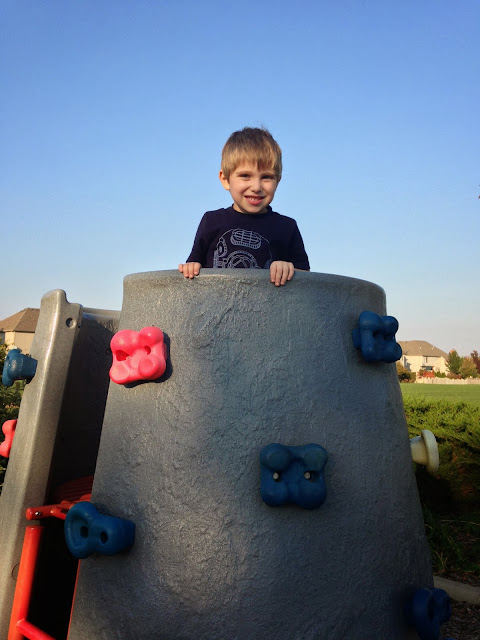 Henry tried really hard, but couldn't make it up. I think he gave a valiant effort, though. 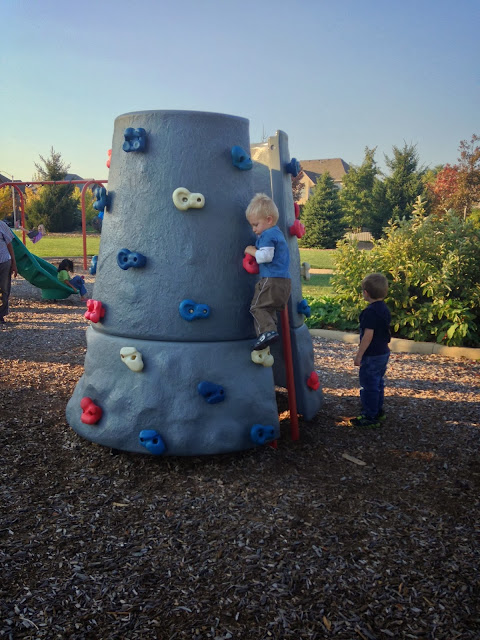 Pretty good for a two-year-old, IMHO. After park time, I took them to Panera for dinner. I had them wash their hands before eating, but their arms and necks were still covered with a mix of sand, wood chips, dirt, tortellini sauce, and grilled cheese. 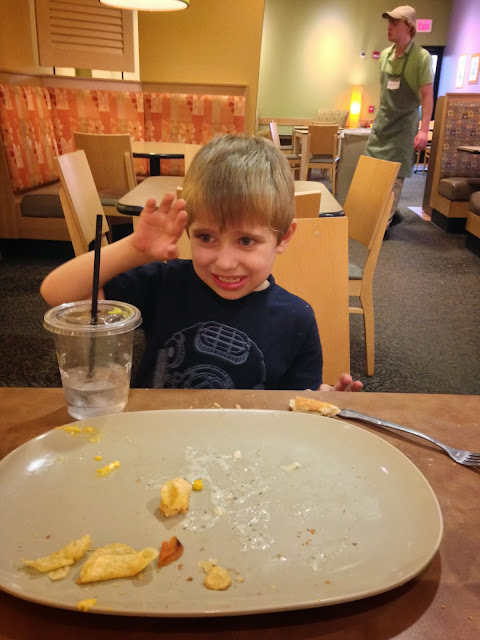 Henry was the messiest. He also ate over 2,000 calories, by my estimation. I started out by ordering a small tortellini dish with a salad and a "big kid" grilled cheese (with bacon) sandwich. Henry ate all but three of the tortellini, more than half of the sandwich, an entire piece of bread, half a bag of potato chips, and several handfuls of corn and beans from my salad. Then they split a pumpkin cookie. I do not understand where the boy puts it. To top it all off, Henry dumped a whole cup of water on his pants during the car ride home. 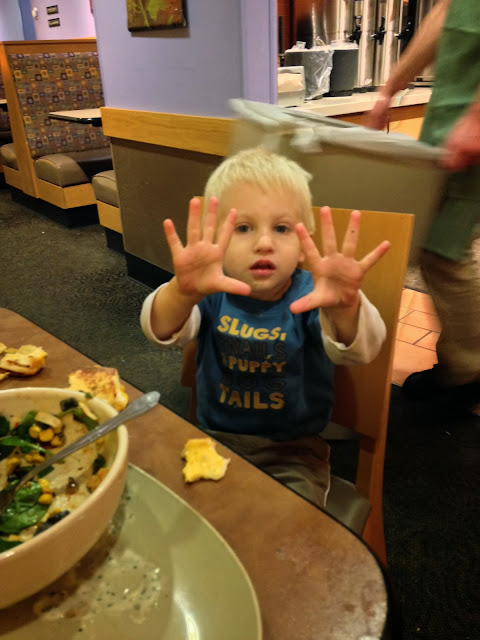 Needless to say, a bath was in the cards tonight. They had sand in their ears, down their diapers, between their toes, and even in their armpits. My boys were happy, though. 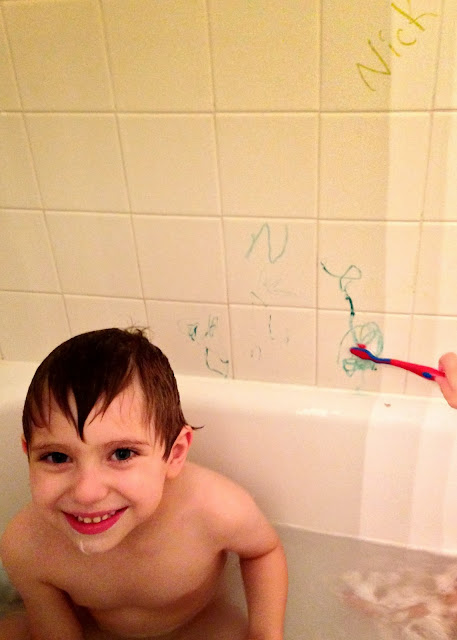 Scrubbing the sand out of their crevices became Greg's job, though. I was so glad to see him home early from work. Thankfully, both boys were washed well and sent to bed clean and sand-free. For tonight, anyway. 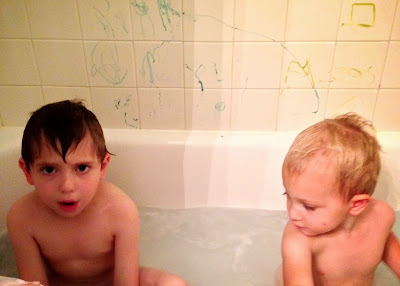