We've Got Some Lego Ladies Up In Here! 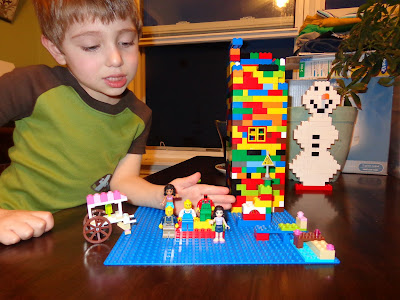 I decided it was time to go co-ed after the following discussion the other night.

Nick: Mommy, what's another name for a girl Lego guy?
Me: A Lego lady, maybe?
Nick: Okay, then, we need to get some Lego ladies up in here. The guys are lonely in our skyscraper!

I did think it was curious that none of Nick's Lego sets came with any female Lego people. It's not that I have anything against Lego men, it's just that. . . . a world populated only by men is kind of boring. And, as Nick said, his guys were lonely. Especially the one in the green overalls. He lost his head. 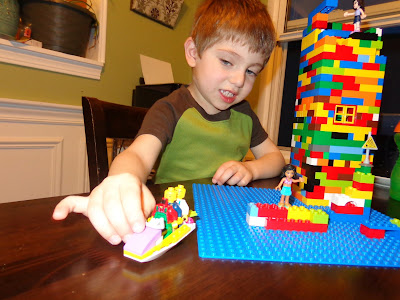 When I was in the store today, I ventured into the purple and pink aisle and found the "Lego Friends." Besides having better hairdos than their male counterparts, the Lego Ladies are also taller and have rounded shoes. I was afraid their kits would be too girly, but I was pleasantly surprised. I got Nick a jetski set and an ice cream cart, both of which we put together tonight. Note all three Lego men cruising on it in the picture above. I love how the headless man is, of course, the driver. 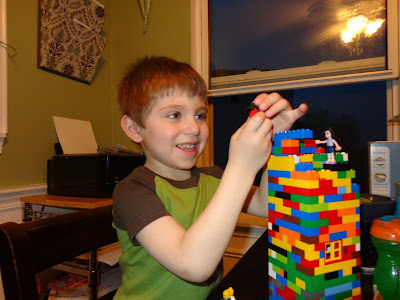 Although I only have sons, I try very hard to allow them to form their own opinions of gender roles. Nick and Henry love to wrestle and poke one another with sticks, but they also adore walking around in my shoes and sampling my eyeshadow. (They always pick the most expensive kind to play with, unfortunately.) Traditional gender roles don't really fly around here. For example, Nick once said something to the effect of, "Mommies don't clean! Only Daddies clean." In our home, this statement is more true than it probably is in most places. 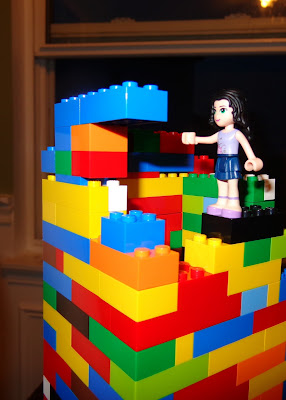 Therefore, I made sure Nick knew that the lady in purple (she comes with a name. Emma, I believe) is perfectly capable of being the foreman (forewoman?) on the skyscraper-building project. 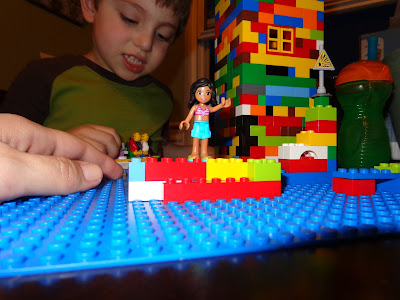 Nick was completely okay with this. I told him that Emma's friend Kate (the one who came with the jetski) needs to get something to wear other than a bikini top before she can come into the construction zone. 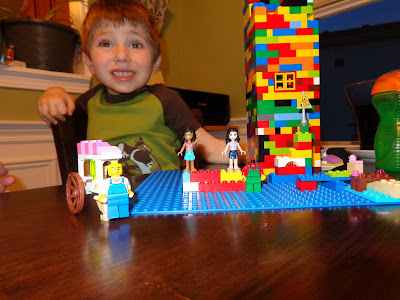 In the same vein, we had the disgruntled, bald gentlemen with the five-o'clock-shadow pull the bright pink ice-cream cart around.I was rather confused as to why jetskis and ice cream carts are only sold with the sets marketed for girls. Boys like those things, too! In my Utopian Lego World, the Lego Guys could get their hair done, eat ice cream, and then participate with their Lego Lady friends in the demolition of a small building. Strange how all of the boy-themed sets are all styled on either good vs. evil battles OR outright destruction. Nick has a mining set that comes with dynamite and even an exploding boulder. 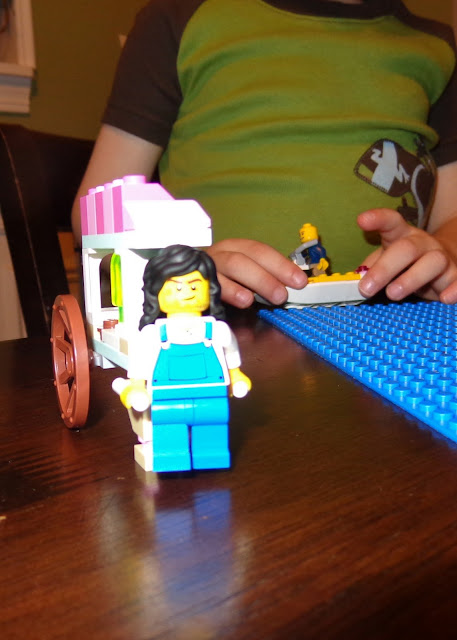 Nick tried Emma's hair on the disgruntled Lego man with the five-o'clock shadow, and I think he looks a little more pleased with his life. 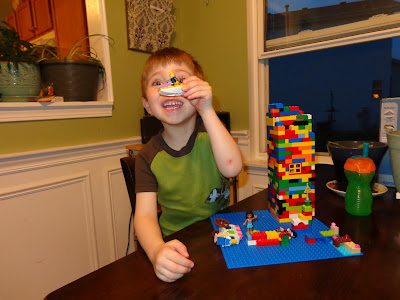 Nick is very happy with his new Lego Ladies. He put all of the male and female Lego People inside the skyscraper for the night. We'll see if some of my Facebook friends are correct and Lego Babies end up being born soon.
Posted by Melissa E. at 9:32 PM