Heard in the car today on the way to the mall:

Nick: Mommy, why does daddy hide to eat food?
Me: I'm not sure, honey. What was he eating?
Nick: Cookies. From the cookie jar. He didn't want me and Henry to see.
Me: Oh?
Nick: He went in kitchen and turned away to chew. He was hided.
Me: Maybe Daddy doesn't want to share his cookies.
Nick: Yeah. He never does. He eats them all up! 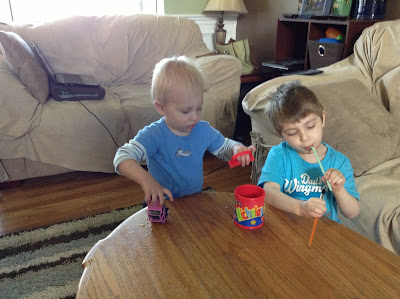 Heard today on our way home.

Nick: Mommy, I see the moon!
Me: You're right, bud, I do see it starting to rise.
Nick: Why does it go up up up?
Me: Well, it doesn't really. It goes around the Earth. But the Earth turns around and we can only see the moon sometimes. The moon revolves around the Earth.
Nick: I like living on a big ball. It's much better than outer space.
Me: Oh?
Nick: Yeah. We have chocolate pastries.


When we were a few minutes from home, one of Nick's favorite songs came on: Prince's Raspberry Beret.

Nick: She wore a raspaddy barraya!
Me: It's raspberry beret. He just means she had a hat that was the same color as a raspberry. A purplish color.
Nick: No! It's a barray!
Me: I promise, honey, a beret is a kind of hat.
Nick: Uh-Uh. No!
Me: Sigh.
Nick: Why did they end the song like that? It is supposed to play the music some more and then it gets quiet. THEN the song is over. Why did they do that!? Why did they do it wrong! They stopped it!
Me: I have no idea. You've heard that song lots of times, haven't you?
Nick: Yes.