The problem with houseplants is that once you figure out how not to kill them, they start reproducing. Soon, they need to be divided. This was my dilemma last weekend. I had about twelve plants that were overcrowded and needed splitting. Thankfully, flowerpots were on deep clearance at Target, and the weather was gorgeous.

While Nick was napping, Henry and I headed outside for some serious plant work. 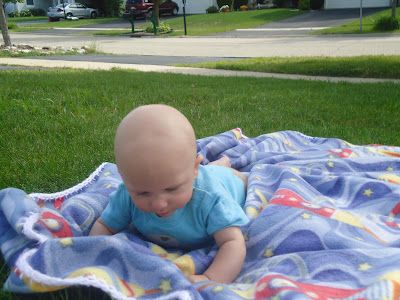 I've been trying to put Henry on his tummy as much as possible when it's not nighttime, because the back of his head is getting somewhat flat. Henry, helpfully, generally enjoys being on his tummy, and he can even turn from his tummy to his back, when he is in the mood.

Henry had quite a nap in the shade, though I had to keep dragging his blanket further towards the tree as the sun changed positions. I was out in the front yard for at least 4 hours. 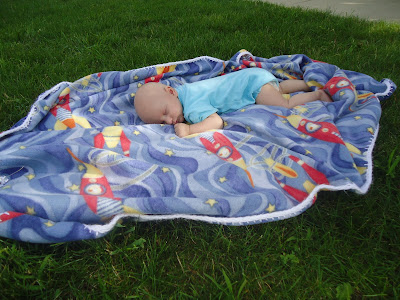 Here is the work while in progress. My young helper is our next-door-neighbor, who graciously offered to help with re potting, fertilizing, cleaning off the brown leaves, and watering the plants so they didn't go into shock. 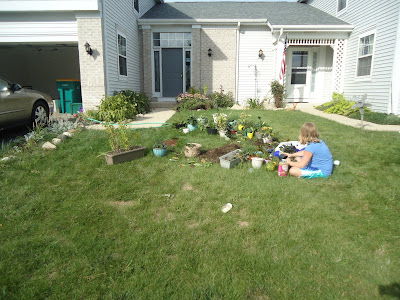 I bet that counted as a workout. Some of my plants that I brought home from school in June have split two times now. I have a few plants that split into three or even four new plants. I'm rather proud of how they turned out.
﻿
Posted by Melissa E. at 10:04 PM