Choo Choo Fun and a Trip to the Podiatrist

(Just so you know, the choo choo fun had nothing to do with the podiatrist, I just stuck the two topics together for this post. After I wrote the post title, I was imagining how many different ways the choo choo set could cause me to have to see the podiatrist. I figured I'd better clarify.) 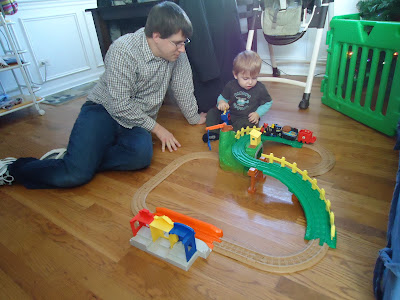 One of Nick's birthday presents (from Grandma Toni) is something called the Geotrax Timbertown Railroad. It's a remote controlled train set meant for two-year-olds, and Nick loves it. If the train gets off of the track (stuck, as Nick would say) all he has to do is put the train back on the orange part and it realigns itself.

Nick plays with his little train ﻿just about every day, and he loves the remote. (What man doesn't?)
So if no one stepped on the train, why the podiatrist visit? Well, ever since I had to put away my cushy, comfy flip flops, I've been having intense foot pain in both feet, and my regular doctor recommended I see a specialist. I had to take Nick with me, and that's why I'm writing about it. This visit was pretty hilarious in retrospect, though I was just a little mortified at the time. It's the moments like this that I don't want to forget.
When I was called into the examining room, Nick immediately discovered the rolling stool. He pushed it all over the room and put his monkey on it. Then, he greeted the doctor at the door with a big, "Hi!" As the doctor sat down and started asking me questions, Nick went behind the examining chair and located the control buttons. He started making the chair go up and recline. The doctor thought this was pretty funny. I helped Nick sit in a chair at the other side of the room, but a soon as I sat back down and took off my socks, he crawled down. Then he stood right by the doctor.
As the doctor examined my left foot, Nick came around to my right side and grabbed the other foot, repeating everything that the doctor did. "Sock off," he said. "Mommy's toes!"
The doctor found the problem immediately. Apparently I have something called "acquired equinus deformity of the foot (x2)," plus a contracture of my achilles tendon. I walked on my toes as a child and that screwed everything up. So I have to see a physical therapist and get some orthotics for my shoes. Sigh. Makes me feel vaguely geriatric, at the grand old age of 32.
The main thing the doctor talked about was the tightness in the muscles on the back of my calf and in my foot. Nick actually kept repeating what he said. "Too tight!," said Nick, holding my foot. "Mommy foot tight." I'm wondering if Nick might have a future in medicine. My son, the podiatrist.  :)  Nice thought. I bet he'd make a good doctor. He's already picking up the bedside manner. Perhaps I should get him a doctor's kit for Christmas, so he can begin to work on his skills.
Posted by Melissa E. at 8:47 PM