Nick has been displaying some new baby skills lately. Like slapping daddy five, when he's in the right mood. He hasn't figured out "Up high" yet, but he's working on it. As you can see, Nick easily pulls up to our cocktail table and walks around it. He can hold on with one hand and grab his bottle. Then he leans his head back to try to drink, and falls and bumps his head. At least he understands gravity; he knows that he has to lean either his head or the bottle back to get the milk. 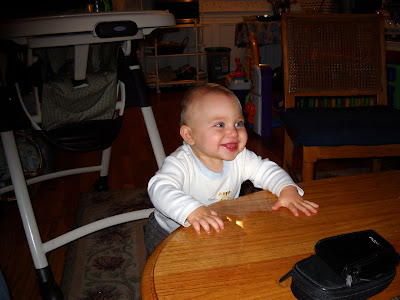 Nicholas also climbs stairs. Yesterday he climbed up five stairs, with me behind him, of course. We've been trying to prevent him from going up, but he makes a beeline for the stairs every chance he gets. Molly (one of our cats) sleeps on the stairs, and he likes to chase her as she retreats backwards up one stair at a time. She does not like his "gentle" caresses, his hair pulling, or his face slapping.

He's been teething lately, poor guy. I think it's the upper two that are coming in now. I'd probably be ticked off if my gums were swollen, too.

This afternoon I realized that Nick can strip the wallpaper off of the walls. Then he eats the strips. I'm not sure how to stop him from doing this. (I immediately got the wallpaper from him, but still.) 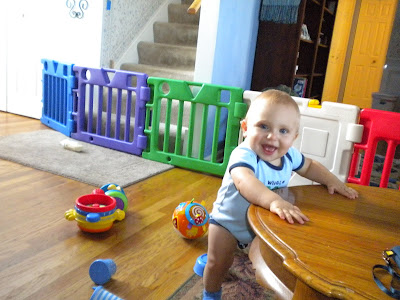 The cats have already started the job, and now he's finishing the wallpaper stripping job. Sigh. He's pretty cute, though, I'll give him that.

We've been using the baby cage to block Nick from all sorts of things lately. We're blocking the stairs, the entertainment center, and the dining room.

Before my eyes, Nick is changing from a baby to a little boy. Even his pout is adorable, although it's also infuriating. It's hard to believe that Nick is 10 1/2 months old. Wow. The difference is astonishing. See him today? Well, below is his picture as a newborn. Huge difference. He's no longer a 6 lb. weakling. Today Nick weighed in at 21 pounds. Carrying him in the carseat is quite a load. I guess we've certainly been feeding him enough. :) 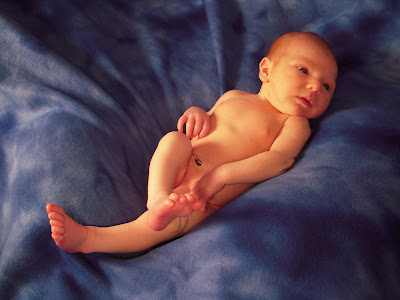 To your right: Nicholas on November 23, 2008. This was only three days after we left the hospital.
Posted by Melissa E. at 6:29 PM