Neuroses and Tapas in Indianapolis

Spending hours and hours in a car with anyone can be stressful, but thankfully married people are used to each others' habits. Mostly.

Greg and I took a road trip over my spring break, with one night in Louisville, two nights in Gatlinburg, and one very, very long day in the car driving back to Chicago. We took our new van, and even though I've snickered about minivan people for years, I have to say I am a full convert. Fitting all of our luggage easily while still being able to see out the back window is a marvelous thing.

What is not so marvelous is our neuroses. I do not typically drive when my husband is in the car. This is partly because I don't really enjoy driving, and partly because Greg cannot stand my driving. I'm a bit of a nervous driver, and if there is even a tiny bit of precipitation, I'm in the right lane, going ten under, with a full three-second following distance. I white-knuckle the steering wheel and do deep breathing exercises. Yes, I know. I have anxiety problems. When the weather is good, I tend to sing along to the radio or listen to podcasts of NPR. I also talk on the phone to alleviate the boredom and prevent myself from falling asleep. During our first road trip back in 2006, Greg was so frustrated with my singing he said he would just do all of the driving. I am cool with that, especially in bad weather. As a passenger, I tend to sleep a lot in the car.

My husband is probably the safest driver on the planet. Knock on wood, he has never been in any kind of accident. He thinks that everyone who has been in an accident just isn't a careful driver. I tell him that he has just been lucky. Greg is one of those guys who will set his cruise control at exactly the speed limit, and he drives with his car seat pulled up so far that I bump my knees and have to pull the seat back in order to get in. Greg is nearly 5'10" and I am 5'4" and a half.

Greg can also spend an entire hour or more just driving in silence. No music, no NPR, and he's not really in the mood to talk. When he does want tunes, he likes to use his new IPod in the car, set to random. Now, I have to say that I don't actively dislike any of the music Greg listens to, and I enjoy quite a bit of it. I was, however, annoyed at the way a nice long jazz peace would relax me, and then Aerosmith would blast out at full volume, interrupting my reverie.


By the time we had reached Indianapolis, there was snow on the ground and the roads were wet. Oh, I suppose I forgot to mention an annoying habit I have as a passenger. Usually only in poor weather, I count following distance obsessively, and if Greg gets closer than a three-second following distance, I throw my hands out towards the dashboard. This is not a deliberate choice, just a compulsive thing I do when I am nervous. I "get" that this makes others quite angry, and I try to suppress it, but I know that I do it all the time. Um, I guess I hyperventilate a bit, too, if I think the car is starting to slip.

Good thing we stopped for lunch in Indianapolis. I think I was getting on Greg's nerves. I used my phone to find this tapas place downtown. It's called BARcelona Tapas Restaurant. 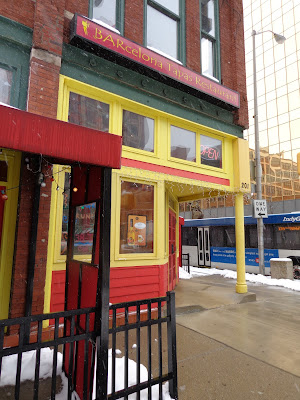 Not that I'm any kind of expert, but I did spend a month in Spain. I tried authentic tapas in probably thirty places there, and I love any chance to try a new Spanish restaurant. We got there at the very end of their lunch, at 2 p.m. or so. We decided to try the buffet, even if some of the food was running out. 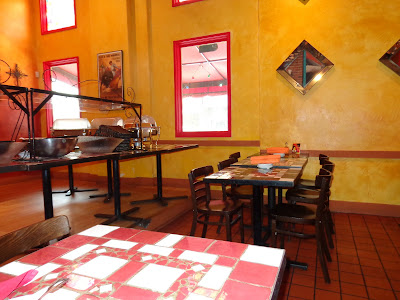 I did not have high expectations, cuisine-wise. I am somewhat prejudiced against the whole state of Indiana, though I have to admit I have seldom veered off of I-80 and I-65. To me, driving through Indiana seems even more boring than driving through Illinois, which is not a thrilling drive either. There is not, IMHO, much more than corn in Indiana. 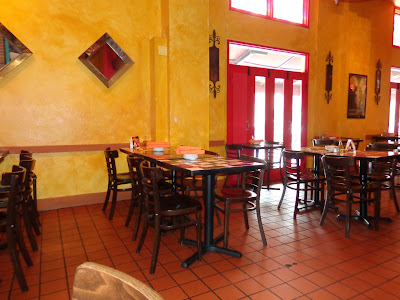 For Indiana, I thought the food was actually pretty decent. The buffet was running pretty low since it was so late, but everything I tried was good. Greg had initially been irritated with my choice, thinking it would take too long and be expensive, but he was wrong. Yes, that does happen sometimes.  He mostly liked the food and especially the decor, which was really neat.

There was a spinach salad that was really yummy, and I liked the Tres Leches Cake, even though I thought this dish was more of a Latin American dessert than a Spanish one. BARcelona Tapas doesn't compare to my favorite tapas places in the Chicagoland area, but I thought it was really good for its location. I was impressed at how reasonable the prices were, too.

Do you want to know my favorite thing about the whole restaurant? This sink. It was in the ladies' bathroom and I want one.

I also thought the mural of a bull was pretty cool, though you can't see it too well behind us.


So, score one for Indianapolis. Greg and I got an hour to relax and enjoy some tapas before having to deal with each others' neuroses for a few more hours. This meal relaxed me enough that I, ahem, slept all the way to Louisville.

I'll tell you about Louisville tomorrow.
Posted by Melissa E. at 9:30 PM