Cruising the Aisles at Costco

Since I'm in the midst of a flurry of grad school grading, I don't have time to write much. I did want to post this picture, though. I seldom get cute pictures with both boys, and I'm rather proud of this one. 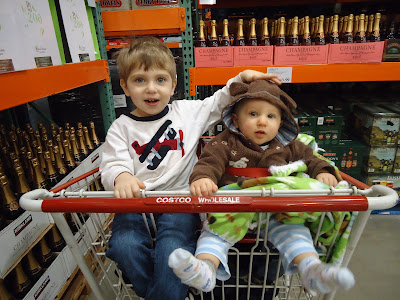 I took this picture on Monday, when I took the boys with me on an advanced-level challenge of parenting: purchasing a cart full of groceries at the Costco with two young children in tow. I seldom try this anymore, but the extra-wide carts convinced me to give it another go. There was also the fact that we were totally out of milk, eggs, baby formula, and diapers.

When I showed Greg the picture, he commented, "You were in the liquor department." I rolled my eyes and replied, "Yeah. Getting two jumbo bottles of wine for YOU." By the time we were done with our trip, the entire cart was filled, and it was so heavy I could barely push it.

Incidentally, Nick thinks any drink he's not allowed to try is "wine." This afternoon Henry was cruising around the cocktail table and almost knocked over Grandma Toni's glass of Diet Pepsi. Nick decided to tattle: "Grandma, Henry was trying to drink your wine!" We had to explain to him that not every forbidden drink is wine. Grandma Toni doesn't drink at all, but we have tried really hard to keep Nick away from carbonated drinks. He has generalized the term "forbidden" and given it the name "wine."
Posted by Melissa E. at 8:59 PM