A Visit to Santa

Nick had his third visit to see Santa this week. For Henry, it was his first visit ever. Both boys seemed pretty happy to meet Santa Claus. 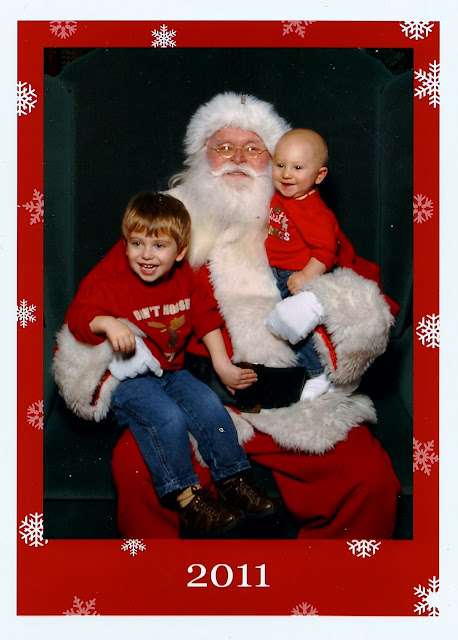 Yup. Both kids actually smiled. I always feel bad when I see those pictures of kids forced to sit in Santa's lap. I can understand why they'd be scared of a portly gentleman in a funny red suit. This tradition does indeed seem a little weird when thought about objectively. In what other culture do we encourage our children to sit on a strange man's lap while we take pictures of the event?

Since my sons do not seem to harbor any fear of the man, however, I will continue our Christmas tradition of taking them to see Santa and tell their wishes. I took Nick in 2009 and 2010, and he smiled both times.

Henry, though pretty happy to pull on Santa's beard, was only able to communicate through drool and baby smiles. Nick was able to give very clear guidelines to Santa Claus about what he wanted in his stocking. "Cars and a block!," he asked politely. "For building. And one of those chocolate candies," he said, pointing at the bin of chocolates next to Santa. (Santa ended up giving Nick two chocolates. Nick is just that persuasive. Perhaps he'll be a lawyer some day.)

It actually was a pretty nice visit to the mall. The day we went, it wasn't crowded at all, so there was no line to worry about. Nick absolutely loved the lights and decorations. His favorite decorations were the strings of lights hanging from the ceiling. 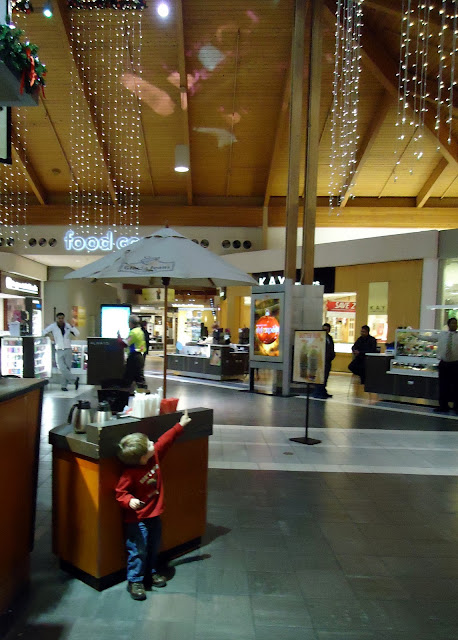 (Nick was pointing to the lights in the picture above.) When he saw the lights, Nick exclaimed, "Mommy, look! Glowworms are up there!" He jumped up and down with excitement. "Are we in the cave?" For a minute, I was totally confused.

"But look at the glowworms!," said Nick insistently. Then I remembered. Since we gained a DVR, I've been recording all of the Planet Earth movies. Nick's favorite is the one about caves. There's a cool and rather gross part in that one where they show glow worms that create sticky strings that glow. The light attracts bugs and when the bugs stick to the strings, the glow worms devour the bugs. This is fascinating to a little boy. Nick always says that the glowworms are having lunch.

Anyhow, I told him that the lights did, in fact, look remarkably like the glow worms. "But those ones up there are just lights," I told him. "No, Mommy. They are glowworms."