Henry seems to be on a totally different schedule than his older brother, at least development-wise. I've especially noticed how strong Henry is--he could hold his head up very early on, and has been doing baby push-ups almost since birth. But this? 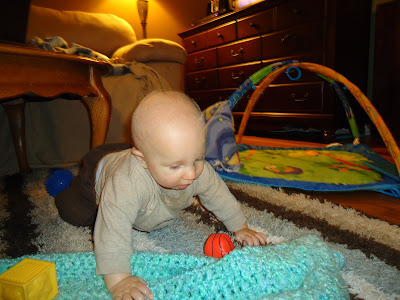 Yup. My Henry-doodle is getting up on his hands and knees and rocking back and forth. This movement is commonly done right before an infant starts crawling. I was hoping this movement was just an anomaly, but he's now been doing this for five days.

Now, don't get me wrong. I'm very proud that my little boy is ahead of the curve in some ways. But we thought we had a few good months where we could still trust the Henry would stay where we put him. Nick didn't crawl until after he was 9 months old. Henry just turned five months old, and he's already rocking with quite a bit of strength and intent. I think he just wants to chase Nick. 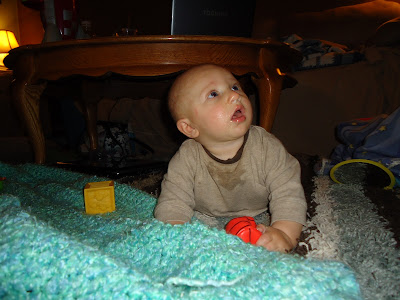 Henry doesn't even sit on his own yet, though he's working on that. Maybe I don't have anything to worry about, other than the excessive drooling and the baby snot. Either way, the baby rocking is certainly pretty cute.
Posted by Melissa E. at 9:54 PM