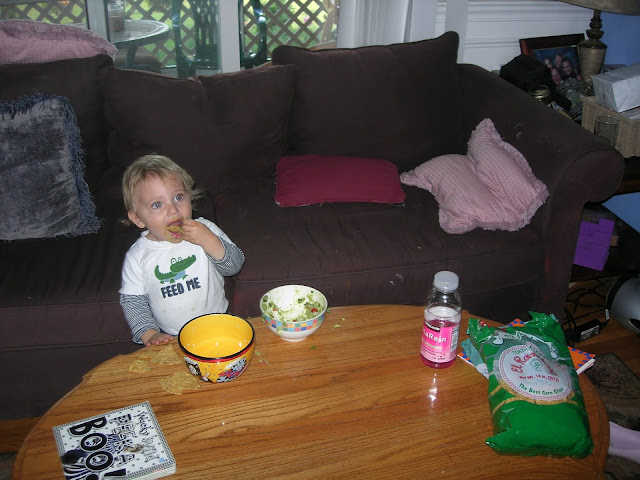 . . . because he just loves his daddy's homemade guacamole. Nick has also inherited his mommy's love for authentic Mexican tortilla chips. I think his t-shirt says it all.  : )

You don't think of guacamole as being a typical food. It's green, for one thing. Plus, it has chunks of onion, garlic, and peppers in it. It doesn't have anything unhealthy in it--even the avocado is a good kind of fat. I doubt I would've touched guacamole with a ten foot pole when I was Nick's age. He must have a more advanced palate. No comments about the guacamole smears you can see on our couch, please. We know we need a new one, but it would be kind of silly to buy a new couch with Nick around. Perhaps when he's older. . .

On Sunday, my mother-in-law came up for her mother's day gift. (Greg was stuck at home last week with Strep throat and couldn't see anyone.) She had especially requested that Greg cook for her. First, he made us guacamole, which we promptly demolished. Then, for dinner, Greg cooked her his fancy carne asada meal, complete with a lime cheesecake for dessert. He wasn't even mad that I bought poblano peppers instead of serrano. (The Dominick's had a list of the kind of peppers and didn't label which one was which.) 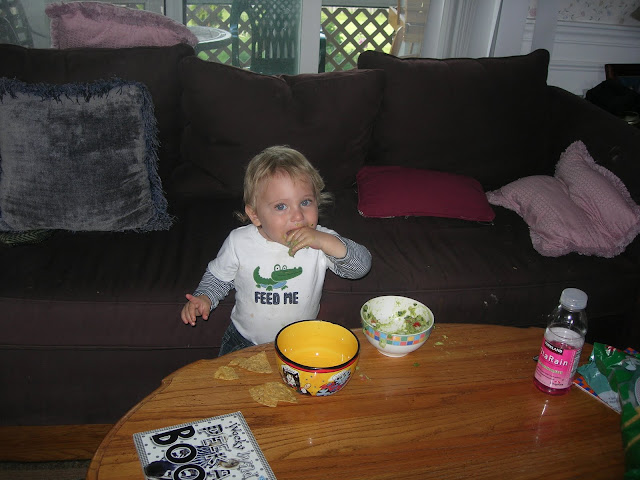 Would you like to know what my favorite part of the day was? (Besides the cheesecake, I mean. Although that was good. Delicious, in fact, considering that it was my husband's first time ever making a cheesecake. There were only a few lumps.) My favorite part was that Nick's Grandma Toni played with him for a few hours while Greg was cooking, and they let me take a nap on the couch. That was a nap for the ages. I must've really needed it. I didn't even feel guilty about it, either, since my little man was having the time of his life with his grandma. I woke up in just enough time to sit down to dinner and watch Nicholas throw steak at the cats and smear refried beans all over his face. He loved the cheesecake, too. I do believe he would've kept using the spoon to take one tiny bite at a time all night, if we hadn't stopped him.
Posted by Melissa E. at 9:12 PM