Guest Blog From My Husband, Greg 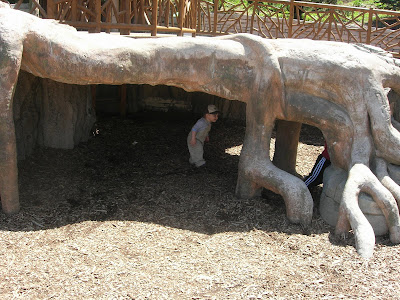 My lovely wife has been pestering me the last few weeks to write something that she refers to as a “guest blog.” I am just old enough to not have much of an interest in or expertise about anything connected to the Internet or computers in general (I only check my e-mail about once a month). However, since it is Mother’s Day, and I love her so much, I will contribute today’s guest blog and write about my trip to the Morton Arboretum with Nicholas a couple of weeks ago. I was given a day off in compensation for a conference that I had to attend on a Saturday, so I decided that it would be fun to take Nick out some place so that we could have some daddy-son bonding time. It was a perfect day to go to the Arboretum. We started the day by walking through the woods along the East Side Trails. Nick likes to point to things and say what they are such as “birdie” or “water.” At other times, he would just randomly start hollering like Tarzan in the jungle. 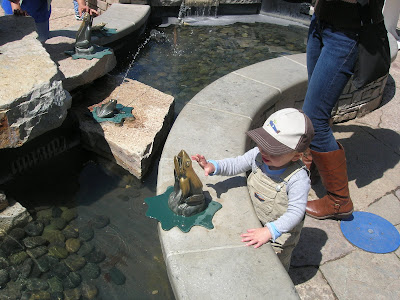 After stopping for a cookie break, we then went to the main attraction: the Children’s Garden. Nick became very excited and started to run around and clap his hands enthusiastically at just about everything that we encountered. I tried to take some good pictures, but it is hard when you have a fast-moving toddler who is in ultra-excited mode. He particularly liked the water fountain with the frog heads that periodically spew water from their mouths. 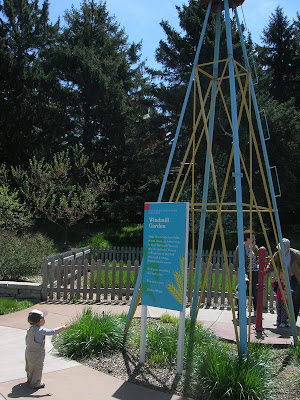 He also was impressed with the enormity of this windmill, which I could not quite get into the frame completely. Nick’s favorite part of all though had to be the slide. He wanted to go up and down it about a thousand times. After an hour of both of us exhausting ourselves running around, we then had a late lunch before Nick went down for a long nap in the car ride home. Both of us look forward to more fun adventures this summer, this time with mommy along as well. 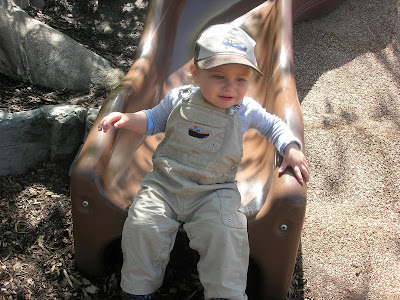