Slowly but surely, Nick is learning how to eat with a spoon. Tonight I gave him some chunky baby food in a little bowl, and for once he didn't throw anything at me. He was surprisingly well behaved tonight, even though I had to run a million errands. (Thank you, Nicholas!) 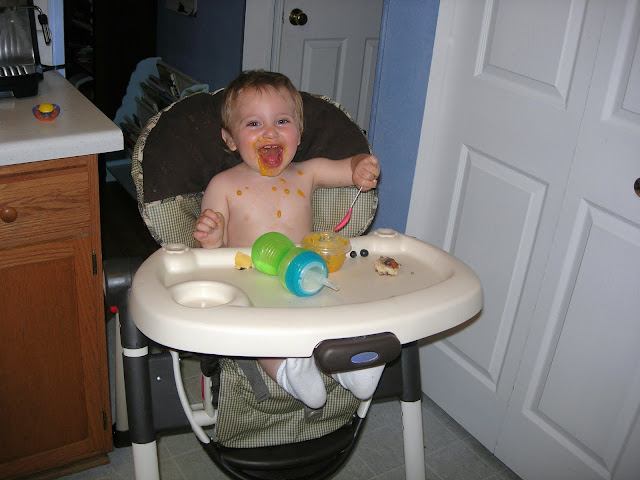 Here's a video of Nick showing off his new spoon skills. He's learning, anyway, and he's really attached to the spoon. I had a heck of a time getting it out of his hand when it was time for bed.

I think that before I became a mom, I used to take for granted the ability to run errands in my spare time. Running in to the mall was no big deal, and I didn't mind going to three different stores for groceries if it saved me money. Now I question every errand and I jump at the chance to run out on a Sunday by myself. I have to say that Nick genuinely likes going places with me; he especially likes people watching and pointing to things and asking me what they are. But every trip is shorter when a toddler is along for the ride.

Don't get me wrong, I love spending time with my son. My life is infinitely more interesting and far less self-involved with him around. But I am truly glad I waited until I was 30 to start having kids.

My crazy evening: I didn't get off work today until 5, because I'm teaching an after-school math class. So by the time I got Nick, it was already 5:15. My car was way overdue for an oil change and a tire rotation, and I had a headlight out. So I decided to kill four birds with one stone. I dropped the car off at Sears, then took Nick to find a little man suit for my cousin's wedding on Saturday. (I hope it fits him.) I had to pick up my wedding rings (refinishing) as well. After I'd run all over the mall, I got Nick a hot pretzel to share with me and decided to get my hair cut.

Yup, I'm crazy. Getting a haircut with a baby in the stroller? But he did stay in the stroller and laugh at me while my hair was cut. He also dumped most of a bottle of water all over himself, so he ended up in just his diaper and shoes. By the time I got Nick home, it was after his bedtime, but he was happy as a clam eating his dinner with a spoon.

I'm not sure if I like the haircut. It's slightly shorter than shoulder length. The stylist blowdried my hair and it puffed up really bad, but it may look okay tomorrow. I haven't had it this short since my early 20s. Oh well. The stylist said I had several inches of split ends, so it's probably healthier like this. I'll post pictures once I've figured out how to style it so that it looks less like I stuck my finger in a light socket.
Posted by Melissa E. at 8:56 PM