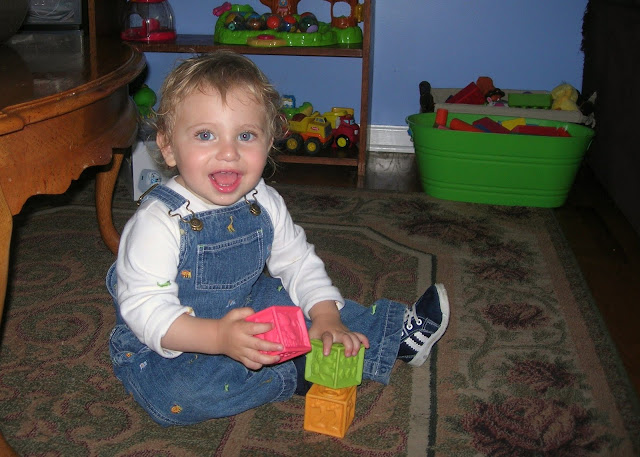 My son is finally figuring out the fine art of building a tower. Up to this point, Nick has only been interested in demolition. He's shown absolutely no interest in architecture or construction. I am a firm believer in toys that encourage creative play, so Nick owns at least four types of blocks, which are usually used for chucking at the cats or his mother. When I take out the wooden blocks, he smashes them together or tries to break things with them. Nick sees the plastic blocks and thinks, "Those must be for chewing." Building with them did not occur to him before today, even though I've been encouraging block play for months. Kids, I've learned, tend to develop at their own rates, and when they're ready to do something, it just happens. 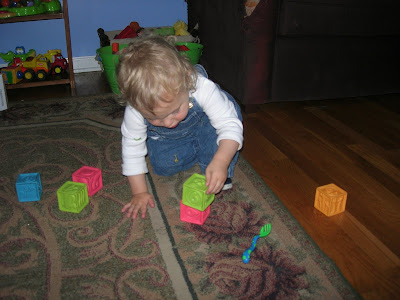 Today Nick was ready. I am proud to announce that my little boy figured out that towers are for building, not just for kicking over. Note the intense posture he's assumming in the photo above. He actually paid attention while I was building and then copied me. Perhaps it was the way I clapped for him every time he added a block to the tower. Nick got to four blocks! The squishy blocks we were using stay stacked very well, so he had some architecturally unsound structures that miraculously stayed together. His attention span wasn't bad, either--we were using the blocks for a good 20 minutes before he lost interest. 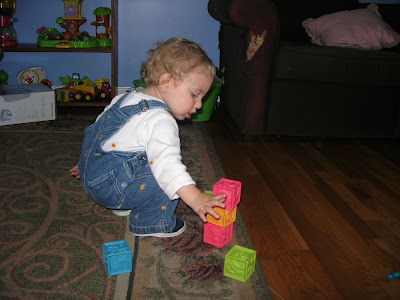 I'm very proud of Nick's newly discovered aptitude for building. Perhaps he will support his father and me in style one day with his wages as an architect. Or maybe he'll buy us a cheap bottle of wine with the wages he earns as a demolition man.  ; ) Because, you see, he still prefers knocking the towers over. But at least he's building his own towers now!
Posted by Melissa E. at 8:35 PM