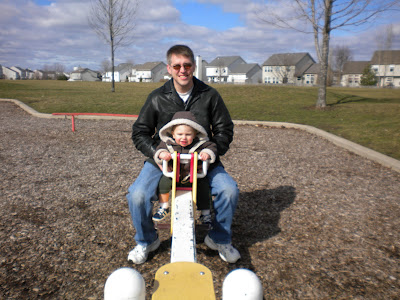 I would say that walking to the park with a 1 year old is an exercise in futility. Nick never wants to walk in the direction we want him to go--he will suddenly turn around and start running the other way. Once we got him there, though, he was in toddler heaven. Greg and I sat on the see-saw, and Nick didn't want to let us stop. I think he could have bounced forever. (I, on the other hand, discovered that you can indeed get nauseous from a see-saw.)

As spring gets closer and warmer weather appears, we've been taking Nick to the park every chance we get. He needs lots of exercise and fresh air, or he turns into a monster. He'll stand by the window, pointing and looking hopefully at us as we sit on our butts on the couch. Nick is right, though. Fresh air is good for all of us. 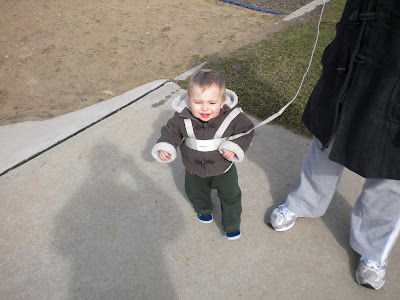 Yup, we have officially become "those" parents. The ones who would put a child on a leash. Nick is just so fast. Plus, he changes direction quickly and we don't want to lose sight of him. When we try to walk holding his hand, Nick is still so very short (2nd percentile for his age) that we have to hunch way over, so that's not effective either. Thus the baby harness. So far so good. I believe it's a good compromise between carrying Nick or having him in the stroller continuously and letting him run for the hills (literally). 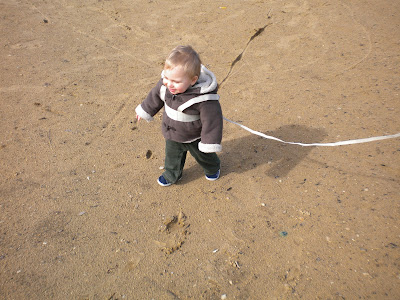 Another sign of spring, for me, unfortunately, is allergies. As things are starting to defrost and the mold count multiplies, my allergies have become intolerable. My usual singulair pill isn't enough to make a dent in the horrible post-nasal drip that curses me at least once a year. Right now I get to choose between being drugged on Sudafed and being so stuffed up I can't breathe through my nose. The worst part is that I'm losing my voice. That might not be a big deal for some people, but I use my voice to control as many as 30 children at a time. My job is very dependent on my voice, and it is very hard to try to squeak and croak my way through a day of teaching. Can you imagine teaching remedial math to 19 fourth graders in an after school program when all you can manage is a croak? I do love spring, but I'm wishing that a fix for these allergies could be found. I want to breathe properly again!