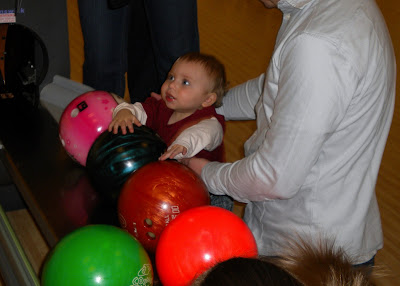 Friday night we took Nick bowling for the first time. It was an entertaining and yet exhausting time Some of Greg's co-workers were meeting up in Batavia, and they all brought their kids, so we brought Nick. He loved the brightly colored balls and the people and the noise. We had to keep chasing him away from the lanes. He kept trying to pick up the balls, even though they weighed almost as much as him. I even let him help me push one of the balls down the lane. It went straight into the gutter, but he sure enjoyed the experience. 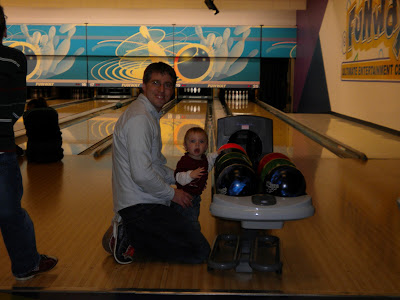 Greg and I had a hard time keeping track of Nick. He was continually running off, usually toward the lanes. He wanted to run down the lane at the pins, and once he actually slipped out of my grasp and went past the line. Bowling alleys put slippery stuff on the lane, so he fell right on his butt. I had to crawl down the gutter to catch him. He thought it was a game, running away from me. I would pick him up and carry him back to the table. Then, he'd wiggle to be let down and run towards the pins again. Lately he wants to walk everywhere, too. When we would pick him up he'd go limp and then wiggle to try to get down. I decided then and there to buy him a leash ASAP. 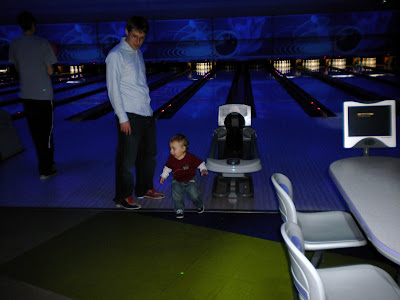 At one point they turned the alley into Cosmic Bowling, which is where they turn off the regular lights and you bowl using blacklights. They play loud music in the background, too. These little green lights were bouncing everywhere, and Nick loved chasing them. Most of my pictures didn't turn out because of the poor lighting, but Nick was definitely stimulated by the environment. He got to meet some other little kids, play with big heavy balls, and run and let us chase him. Nick won on this round, but I vow to win next time with my secret weapon: the baby leash.
Posted by Melissa E. at 10:12 PM