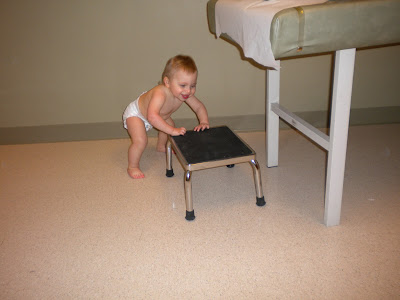 Today was Nick's doctor 15-month doctor visit. Nick was playing with a little boy in the waiting room before our visit who was 9 or 10 months old but was taller than Nick and easily outweighed him by 8 pounds. However, Nick was running circles around the tall little fellow, who just stood there in awe at Nick's amazing skills. (He pushed all the children's chairs across the room, including the table.)
He loved the opportunity to wander around in only his diaper. Good thing I didn't try to sit him in my lap--we had to wait over a half hour. In that amount of time, Nick moved the furniture, tried to open all the drawers, pulled on the exam table paper and shredded it, listened to a story, dumped his clothes all over, and was amusing himself by spinning in circles when the doctor finally walked in. Hey, at least he can entertain himself. 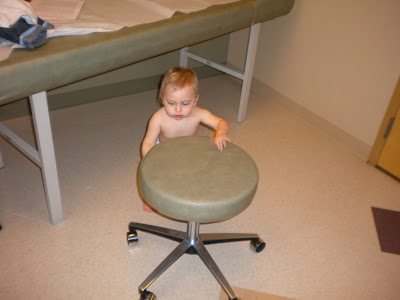 The closer to naked he is, the more cheerful his mood. He especially loved pushing around the doctor's stool. Nicholas only cried for a minute when they gave him three shots. But he yelled when I tried to get him dressed. I guess clothes are worse than getting pricked, at least for him. Here are the stats:

So he's short. We already knew that. He's doing better than many toddlers because he's been completely off the bottle for months now, and he can already drink out of a straw. Also, he eats anything--literally anything, and so we merely feed him healthy food and he eats it. (I know, that sounds simple, but for many kids, every bite is an argument.) The doctor was pleased at how well he sleeps--Nick goes to bed like clockwork at 8 pm. and wakes up around 7. He also usually takes two good naps during the day. I am fully aware of how much luck it takes to get a kid who both eats and sleeps well.  :)

Nick is also right on target with his gross and fine motor skills. He's a little ahead in the way he can turn the pages of books and point to the characters when asked. Nick does not, however, talk much. Besides the word "tree" at Christmas time, all other words have been temporary and prompted. Oh well, I guess all kids are ahead in some ways and behind in others. I was encouraged tonight by the way I asked him, "Do you want a story?," and he would bring me one book after another, until I had read him eleven books in a row. Usually he tires out around eight. At one point I asked him to get a particular book, and low and behold he brought it to me. Coincidence? Perhaps, but it made me feel better about him not talking.
Posted by Melissa E. at 9:03 PM