Since last year, Nick and Henry have been taking weekly swimming lessons at our YMCA. Once every week or two, I try to take them to practice the skills they've been learning. Today, I took my phone into the pool, because I was either crazy enough or brave enough to risk water damage while taking pictures. 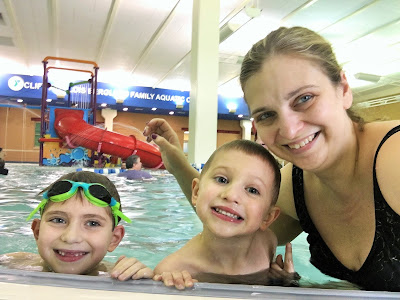 Nick is still in a beginner class, but Henry has already moved into the preschool intermediate swimmers' class. His little toes can't touch the bottom, even here, so the swimming you see him demonstrating? It's all him.

Nick is a very decent swimmer himself, but he gets nervous when he can't touch the bottom, and since he's older his classes are in the big pool. He gets scared and the water is colder over there. Nick has pretty much mastered the belly flop, the cannonball, and multiple other artful ways of jumping into the pool. 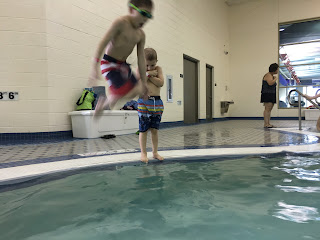 I think Nick probably jumped in several hundred times in the couple of hours we were there. I got tired just watching him.

Nick is just learning to do a proper swimming stroke, but he's very proud of the progress he's made. I think he gets better after every lesson.  :)


Henry can jump, too, though he's not as acrobatic as Nick. I think he wins for facial expressions, though. 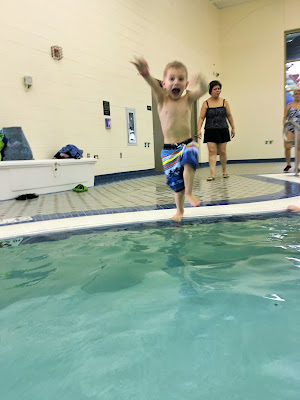 I'm a fairly decent swimmer, though I'm probably the least athletic person on the planet. I didn't get to do much actual swimming today, either, since the family pool is so shallow. But I still feel exhausted after spending a few hours chasing these two guys around in the water. Each of them devoured two protein bars in the car on the way back to our house, and they'd had a big lunch before swimming. Right now? They're sleeping like logs. Swimming is good for that.