A few weeks ago I took Henry and Nick into Greg's office. His coworkers had been asking to see the baby (and his big brother, of course). 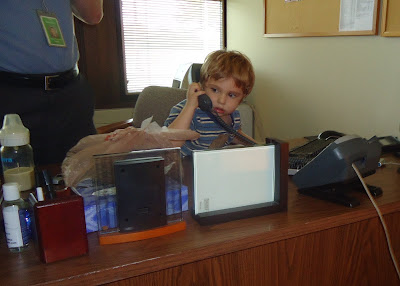 Nick was very excited to see where Daddy works. He had to try out the phone, the computer, and all of the fun "toys" on Daddy's desk. We're not sure exactly who he called. 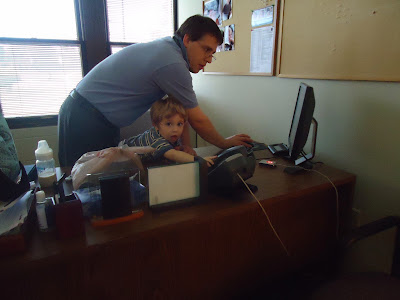 During one hour in Greg's office, Nick managed to wreak havoc on the computer, shriek randomly, throw a tape recorder on the floor, charm several people, and enjoy himself thoroughly. Henry, meanwhile, filled his pants. Then Nick ran down the hallway, pushed open the office of the head of the whole place, and stole her flashlight. She, thankfully, has little boys of her own, so she just laughed.

All of Greg's staff said that the boys were adorable. They even let Nick play with their cellphones and pens and such. But, then again, Greg is the boss, so perhaps they had to say that Henry and Nick were cute. . .

I've been offline for awhile now. Greg and I went to Milwaukee for a nice little getaway by ourselves, and then I started teaching graduate school last night, so things have been kind of busy. I start back to work next week, too!

Hopefully I'll get caught up with my posts over the weekend.  :)  Lots to share.
Posted by Melissa E. at 9:42 PM