I had a pretty rough night last night. Henry started out his life as an excellent sleeper, going up to 5 hours at a stretch almost right after birth. But in the last few weeks, he's been waking up more at night. 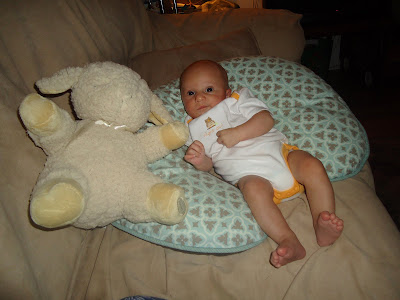 There are very different meanings of the phrase "a rough night," depending on your stage of life. My first year in college, it indicated a night full of studying, or paper-writing. (I started out as a very conscientious student.) By my second year of college, a rough night was one where crazy things happened, sometimes involving a little too much to drink. Not always, though. Often, my friends and I would stay awake for no real reason. I should mention, though, that my grades never suffered for this.


During my college years, it was not unusual for me to wake up well after noon, or to fall asleep in my morning classes. Once, I fell asleep in Political Science class in a lecture hall filled with at least a hundred people. I'd been sitting in the front row, right next to the professor, in the hopes that proximity would keep me conscious. The elderly gentleman woke me up and gently suggested that if I was going to sleep, it would be better for me to move back a few rows. His microphone, you see, was picking up on my loud snores.

As a new teacher, I stayed up late every night grading papers, constructing lesson plans, and doing research. Anyone who thinks it is easy to be a teacher should try it for a few years. It was not unusual for me to drift asleep at every stoplight on my way to school. Those were some rough nights indeed.

When Nick was Henry's age, my maternity leave ended and I went back to work. He didn't start sleeping through the night for a few weeks after that, and I was in a fog. After several times of nearly driving into ditches, Greg started waking up with Nick, because he could function better on less sleep. Thankfully, Nick slept through the night fairly quickly, and he's been a twelve-hour per night sleeper ever since.

I have always been a woman who needs her sleep. Some people can function on six or seven hours, or even less. Not me. Eight is a minimum for me, and if I don't get it, the result is extra caffeine, falling asleep standing up, and other drowsiness issues. I am keeping my fingers crossed that Henry starts sleeping through the night very soon.

2:45 a.m.--All of our smoke alarms started going off. We have one of those interconnected, super-loud systems, and it scared the you-know-what out of us. There was no smoke that we could see or smell. Nick woke up, too. We went downstairs to figure out what the problem was. Turning the A/C down a few degrees stopped the noise; as soon as it clicked on, the beeping stopped. I googled the problem to try to find a solution, without much luck. After about a half-hour, we gave up, left the A/C set at a sub-arctic temperature, and went to bed. Henry slept through the whole thing and never did wake up. He's used to loud noises, I guess. It took me more than a half-hour to get back to sleep.

4:00 a.m.--Henry woke up squalling, demanding his bottle. He was easily appeased, though, and, after a nice 4 ounce meal, back to sleep by around 4:30.

5:15 a.m.--For some reason, Henry woke up again. I guess he was extra-hungry last night. He nursed, downed another 4 ounces, and passed out yet again.

6:35 a.m.--Greg woke me up to ask where I'd put the clean onesies. Apparently, all of that milk made Henry pee through his clothes.

7:30 a.m.--Henry started hollering again while Greg was in the shower. I was too tired to go down for a bottle, so I nursed him and fell asleep. I'm guessing Greg took care of him and re-swaddled him.

8:20 a.m.--Greg woke me up to tell me he was leaving for work and Nick was playing quietly in his room.

9:45 a.m.--Henry woke up hungry again. I gave up on sleep and went searching for coffee. 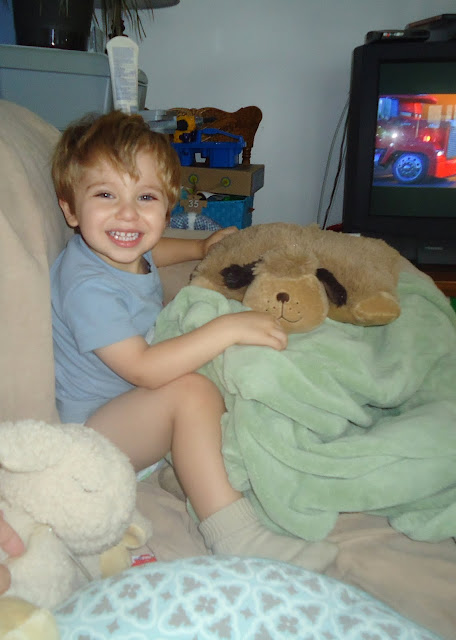 I was in bed for nearly ten hours, but I feel like I didn't sleep at all. It was indeed a rough night.

Does anyone have any suggestions about our smoke alarm situation? It is indeed a dilemma, and I'm not sure what we're going to do if it happens again.
Posted by Melissa E. at 12:16 PM