Keeping Both Plants and Baby Satisfied

Today has been a kind of lazy day. Besides screwing up a muffin recipe, I played with the baby and checked up on the garden. I love summer vacation. It is four p.m. and I'm still in my pajamas. I suppose I can give you an update on both plants and baby.

The mystery plant my friend Trina gave me still lives. I still don't know what it is, but at least I'm not responsible for its demise. 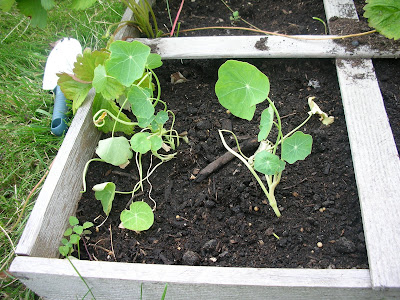 I suppose the watering helped. I actually went out and watered my little garden these last few days. Unfortunately, I seem to have less strawberries than I did before I cleaned out all of the weeds. Perhaps the weeds had a protective feature that helped keep the birds and bunnies away. But at least I didn't kill anything. . . yet. I seem to do better with plants that want to be left alone. Point in case: 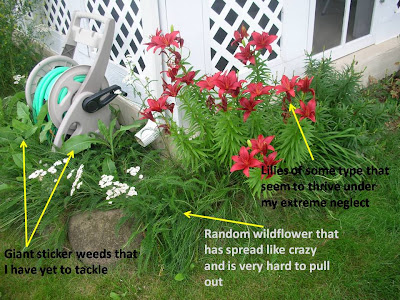 These beautiful red flowers (lilies, maybe?) do very well when I don't touch them. They are beautiful and whenever I have company, I get compliments on these flowers. However, I have never done anything with them. No watering, no weeding, no fertilizing, nothing. The most I have helped these flowers along is by ensuring that they don't get stuck in the screen door behind them. Oh, and I'm also pretty awesome at growing giant stickerweeds. I do want to do something with the bed of flowers around the hose. There is a giant prairie weed with pretty yellow flowers that took over (see below) as well as a green random wildflower (see above) that grows all around my property. I tried looking the names up online, but no luck. I guess googling "wildflower that spreads and won't die" isn't my best strategy for figuring out the name. 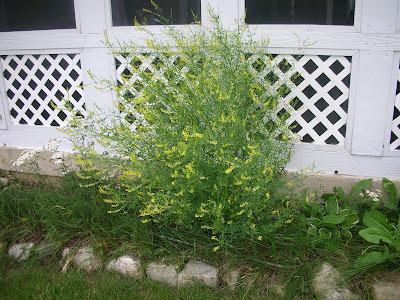 Nick is my 7 month old son, and he has been really crabby lately. Usually he is an extremely cheerful baby, but the last two days he's been whiny and hard to calm down. It is either teething or the slight case of diaper rash. Nick is also frustrated because he can't crawl quite yet. He knows how to do the push up part, but he just flaps his legs and gets mad when he doesn't move anywhere. So I guess that might be the cause of his general crabby mood. Lest you think I am a horrible mother, know that I snapped these pictures en route to the refrigerator, where I immediately grabbed his bottle.

In this first picture, you can see the lower lip starting to quiver. Nick is not a happy camper, and my guess was that he wanted his bottle A.S.A.P. As soon as I saw this look, I took off towards the fridge. 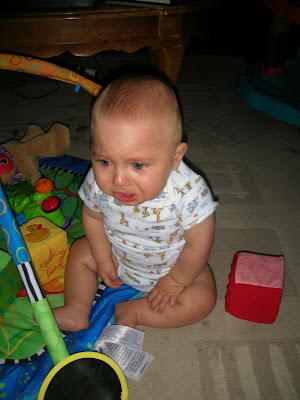 As I approached with the bottle, Nick was absolutely furious with me. How dare I not have his bottle ready immediately upon the slightest twinge of hunger! 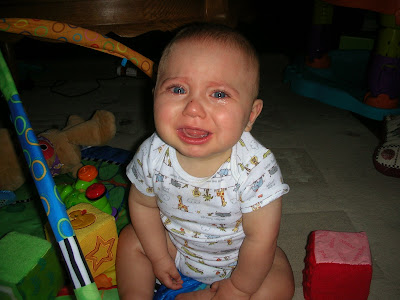 But, as with most men, Nicholas was easily satisfied as soon as he grabbed the bottle. All he wanted was a cuddle and a drink. 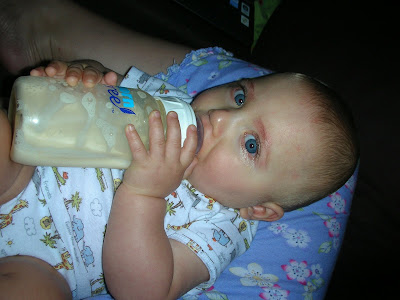 All's well that ends well, I suppose. At least if you're a baby.