Fighting the Weeds and Looking for my Shovel

Why have I decided to start a blog? "Well," I figured to myself, "Why not?" I talk to myself quite a bit, usually in an admonishing kind of tone. As in "Melissa, put down that brownie!" or "You do not need another pair of shoes!" It's kind of my superego, I guess. Sometimes it works, sometimes I just tell myself to shut up as I eat the brownie and buy the shoes in spite of my inner voice with the wagging finger.

I certainly spend enough time reading other people's blogs. I love to write, and I actually type much faster than I can write on paper. I have various unfinished journals scattered around my home. My problem is, I lose journals because they are tangible. I really envy my husband, Greg, who has religiously written is his journal every night for three years. I bet he never lost his journal, either. I also lose recipes, which is why I've decided to keep everything on the computer. Then, all I have to keep track of is the computer, which I think I can manage.

Last year I started an educational blog for one of my graduate school classes. I liked the experience, but I wanted to start a personal blog, too. At the time, however, I was six months pregnant and had no energy for anything that wasn't for a grade. Well, it is summer now, and I have the time. So here I am.

I spent my morning tackling the weeds in my raised bed garden. An accomplished gardener I am not, mostly because I am not very consistent. View Exhibit A below: 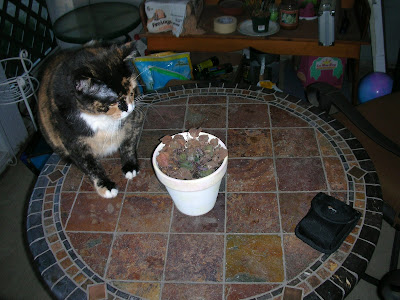 You can see my cat, Molly, who is trying to decide if the dead plant is worthy of her attention. She usually likes chewing on plants, but I have killed this one. I did not water it. I did not clip off the dead leaves. In fact, I forgot that I had an African Violet, and thus, it died. It's a darned good thing my cats and my kid yell when they're hungry, or I'd be in big trouble.

My raised bed garden was a project I started two summers ago, when I read a book called "Square Foot Gardens" and bought the kit to make my own 16-square vegetable garden. That year I had pretty good success with the thing, considering I kept forgetting to weed it. I even got two huge zucchinis out of the deal. The bunnies kept eating the produce, but it grew pretty well. Last summer, though, I was pregnant, and I'd read somewhere that digging in the dirt could be dangerous to the baby. So I sat on my butt all summer and didn't touch it. In fact, this weekend was the first time I have laid a hand on this patch of dirt. I noticed last month that the only things living in the garden (except for grass and sticker weeds) were a ton of strawberry and catnip plants. I actually think that the strawberries survived the birds/bunnies because of the catnip. You see, our neighbors have a black cat that they let roam around, and he spends quite a bit of time hanging around the catnip patch, looking for a fix. The birds and bunnies are wary and stay away, at least thus far. Shadow (for that is his name) is welcome to all the catnip he can eat, if he'll keep the birds away.

I've actually been able to pick strawberries a couple of times a week for the last couple of weeks, and they're really delicious. Miniature, but tasty. According to the little plastic tag I found under the weeds, I apparently planted everbearing strawberries. The multiplied despite (or perhaps because of) my lack of attention. I've been using the berries to make baby food for Nicholas, my 7 month old son. He loves them with oatmeal. I guess they're organic because I certainly have put nothing on them. Here is one of the lovely tiny berries I "grew" with my lack of attention. 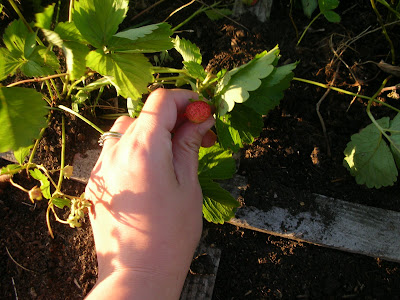 So I guess I'll include a picture of the finished, weeded garden. I wish I had taken a "before" picture so you can see how nasty this patch of garden looked. It was filled with huge weeds and tons of grass that had blown in. The blisters on my hands and the sunburn on my shoulders testify as to how hard I worked. At one point this morning, Shadow stopped by the garden and looked at me as if to say "What are you doing here, this is my patch of kitty drugs?" Then he helped himself to a few leaves and stalked off in exasperation. 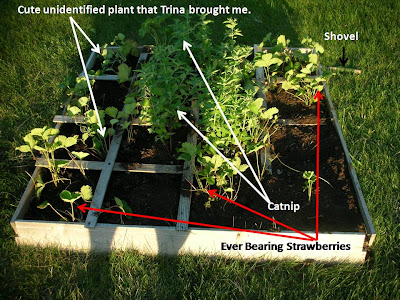 The garden is still strawberries and catnip, but I added in this cool looking plant that my friend Trina brought me when she visited from Iowa. I can't remember what it's called. She said I can eat the flowers though. Maybe I will, if I can get it to flower before I kill it. 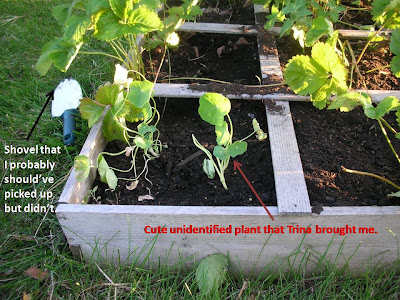