This year our spring break has not been quite as fun as in years past. Last week, all of us were felled by influenza, and this is pretty much how we've been spending our time. My Fitbit gently warned me today that my activity level has been much lower than is typical. Unfortunately, there is no Fitbit mode for "flu," so mine just thinks I'm being particularly indolent.


Poor Henry had the worst of it. He had a full seven days of fevers, some as high as 103.8, and missed the last three days of school before spring break. Henry spent most of the last week sleeping, and couldn't stay awake for more than an hour at a time. Greg and I both got a pretty bad case of influenza, too, though he recovered faster than I did.

Nick coughed for a few days, but overall has had a much lighter case than the rest of us. He ditched us to go play outside for most of the time, at least when it wasn't raining.


The boys spent a ton of time watching how-to-draw videos on YouTube. This doesn't require a ton of energy, and when you get a coughing fit you can just pause the video. Today was the first day we felt well enough to venture out of the house (for a longer trip than to the Walgreens or the doctor's office). Henry had his last fever on Tuesday, so no one is contagious anymore, though the doctor said the cough could last for weeks. 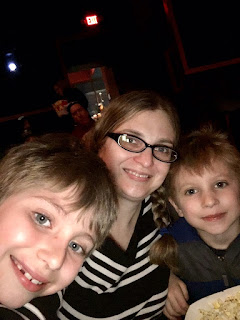 I decided to take the boys out to the movies, since it was pouring rain. I do believe nearly every other parent in the area had the same idea; I've never seen the $4 movie theatre so full!  Lego Batman was exactly what you would expect from a movie with that particular title. Henry said he was tired and kept acting like he was going to fall asleep, and then something exciting would happen onscreen and he would be riveted. 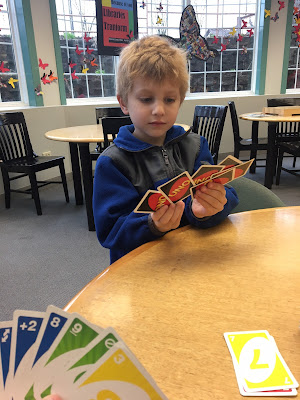 After our movie adventure, Nick had to go to drum practice, so Henry and I headed to the library for a rousing game of Uno and some block-building. 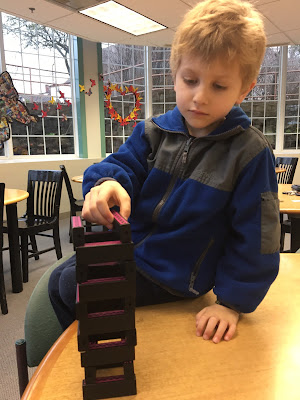 While we did get some basement organizing done, frankly, this has been one of the least fun spring breaks that I can remember. I can't even say it has been relaxing; it's hard to relax when you can't stop coughing, even if the Fitbit says you slept over 10 hours cumulatively. I refuse to take the darned thing off, though. Hey, this week can be a baseline, and no matter what, I'll look like a superstar next week.
Posted by Melissa E. at 9:39 PM