Easter Eggs and an Instructional Video

I bought three dozen eggs today, thinking that would be enough. Seeing as my sons and I somehow ate eight hard-boiled eggs in one evening, perhaps I should've gone with four dozen. Ahh, well. 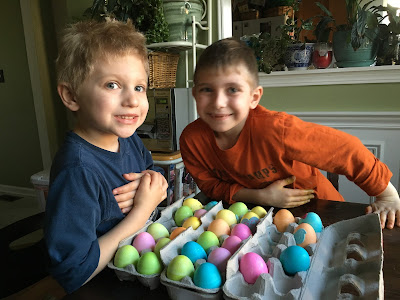 Nick and Henry thought that the best part was watching the little tablets dissolve in the vinegar. Our colors worked pretty well this year, and we added some stickers in addition to the usual white crayon designs. 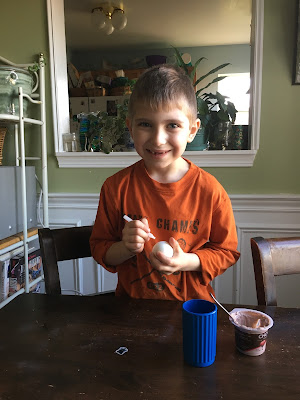 Henry was quite into the whole coloring process, though I had to keep stopping him from dumping all the colors together. 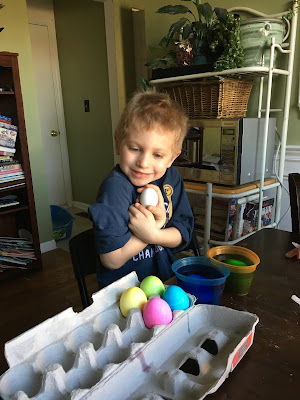 He has tried that with Play Doh, and only gets an ugly brown. But he wanted to try it with our egg dying colors, just to see if the result would be the same. 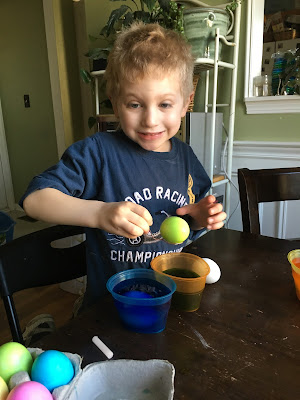 The boys probably would've been happy to color four or five dozen eggs. They were sad when we were all done. Nick had some interesting questions about fertilized vs. unfertilized chicken eggs. He wanted to know why there was no baby chickens inside the eggs. Let's just say that was quite the interesting conversation. 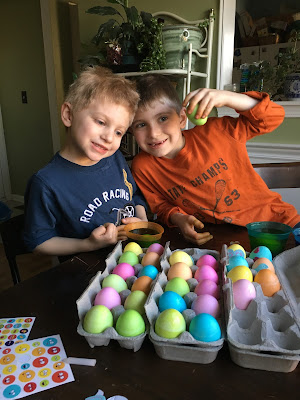 Henry's been really into these "how-to" videos on YouTube. He likes the ones where they show you how to make "jellies," basically gelatin molds of various things. Henry decided he was going to do his own "how-to" movie about how to decorate eggs. Here's what he came up with. https://youtu.be/TqEX8IyP4Pc

Henry says he wants to come out with a whole bunch of these "how-to videos." After all, in his nearly five years he has learned a lot.
Posted by Melissa E. at 8:40 PM