Almost there! I had my 36 week doctor's appointment and growth ultrasound this week. There are 21 days, or exactly 3 weeks, until my scheduled c-section.


I did a 36-week update when I was pregnant with Henry, and I think I looked about the same size. The only difference is that she seems to be sitting much higher than either of my boys did. Here's a flashback to 2011, when my six-year-old was on the way.


The doctor said everything looks good, and she weighs 6 pounds, 5 ounces already. That's the 63rd percentile. The ultrasound technician took some pictures of her, and she does look rather squished. No wonder she's been kicking so much! 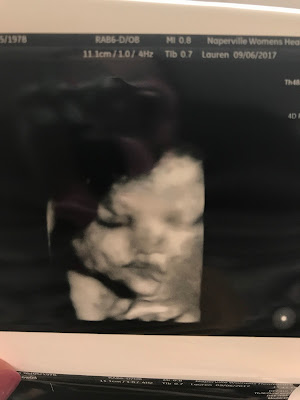 I've had at least four people tell me she looks like Henry. I guess I'll have to wait 21 more days to find out if this is true. I showed Henry the ultrasound pictures of him and he was slightly confused. He said maybe he was sad because he couldn't breathe in the water. Recently, Henry's expressed some interest in having a sister. Yesterday he asked if he could feed her a bottle. That's a good sign, I think.

Weight: (from starting weight) +36 pounds. I've averaged about 40 pounds per pregnancy, so I guess I can't complain too much. I'm at the stage in my job where I do a lot of paperwork and desk work, and that's been very hard since sitting is quite painful. The extra pounds make me clumsy, but I suppose that's normal.

Movement: She's an active girl, and especially in the evenings she does what feels like gymnastics inside of me. It makes it very difficult to sleep. I have to keep moving whatever body part is wedged under my ribs down, and then as soon as I move my hands it creeps back up there, making it difficult to breathe.

Exercise: I'm not doing too bad, actually, My FitBit tells me I'm averaging 8,900 steps per day. Not quite at my goal, but considering the back pain I've been having, I think it's pretty good.

Cravings: Chocolate. Burgers and fries. Corn tortillas cooked in a little olive oil and then slathered with black beans, cheese, shrimp, and sour cream. It's weirdly specific, but I end up having a tortilla like that almost every day.

Sleep: It depends on the day, but I'm only averaging 4-6 hours per night. A friend of mine loaned me a pillow called a snoogle, and without it I don't know that I'd even be sleeping that much. It's the only way I can get even a little comfortable. I like how my FitBit shows my sleeping and waking patterns, but sometimes I'd rather not know I was up four times during the night.

Medical: I haven't needed IV iron yet with this pregnancy, knock on wood. I am still waiting on the latest blood test results, though. I've been borderline anemic, but not enough to need the heavy duty stuff. My blood pressure is good, my non-stress tests have gone well, and the doctor says I am not showing any signs of labor, dilation, or effacement. My blood sugar is going down more frequently, so I'm countering that by eating meals in several parts to keep it steady. Oh, and I've been having major back pain and even spasms on and off for the last few weeks.

I got a warning from the doctor's office that if I start having contractions or if my water breaks, I should not eat anything. Since they'll be doing a general anesthetic, I guess they would have to wait hours if I decided to snack on the way to the hospital.

This week, for some reason, my right ankle and foot is swollen and my left ankle looks almost normal. The nurse told me it has to do with where the baby is--all up on my right side. In a few weeks I'll be standing up in my sister's wedding, so I guess it's a good thing my dress is very long. I can cover up both my normal ankle and my swollen one.

Mood: I'm trying to stay upbeat, even though I'm not comfortable. I alternate between irritability and joy. I want to remember what it was like to be pregnant, since this will for sure be my last pregnancy.  Frankly, whatever I have to deal with this month is okay if I end up with a healthy baby girl at the end of it. I've spent the last few years of my life desperately wanting to be pregnant, and now I get to fold pink baby onesies and little pink bows. Greg put together the stroller and installed the car seat yesterday, so we really are ready to become a family of five.
Posted by Melissa E. at 9:23 PM