. . . to meet his little brother! Doesn't he look handsome? 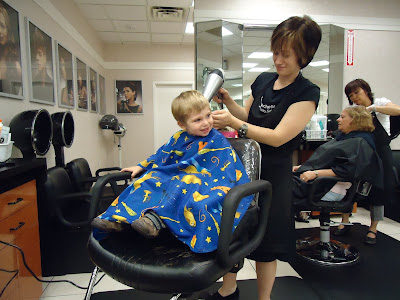 We both went for haircuts today, and Nick was incredibly well-behaved. He sat the entire time for his haircut, chatted with the stylist, and then played with combs and hairclips while I got my hair cut. Nick used his indoor voice the whole time! He even tried picking up the pieces of my hair that the stylist cut and started putting them in the trashcan. No yelling, no crying, no demanding--Nick was the perfect two-year old during this very long salon visit. 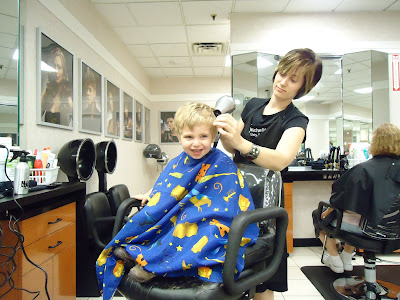 It was weird, because Nick has been kind of a stinker during the last few weeks. I hesitated to go in for both haircuts at once, because I was afraid he'd run for the hills or start screaming and pulling stuff from the shelves. He did none of that. Nick even climbed into his car seat on his own, three separate times. This is excellent, because I'm under strict orders not to lift him after my c-section. I've been trying to train him, and I think he's got it.

It's kind of like Nick was letting me know he is ready to be a big brother. I certainly feel better after today.

Yesterday I had my last IV iron treatment, did some last minute grocery shopping, and repotted about ten more plants. Today was my last day of school, my last NST, and my last obstetrician's visit. It was also Nick's last day of daycare. They played with bubbles, and apparently had a blast. He told me about it on the way home. "I play with bubbles. Bubbles go up, up, up. Bubbles in mine eyes."

Tomorrow I'll post my last pregnancy update, and then, after Thursday, I won't be pregnant anymore. Instead I'll be very tired.
Posted by Melissa E. at 9:36 PM