Being a Big Brother is Hard! Any Advice?

Nick has been learning how to be a big brother this week. He really seems to love Baby Henry. In fact, he wouldn't go to sleep the last two evenings without giving his little brother a kiss. But he's been somewhat petulant and demanding as well. That is because being a big brother is hard! 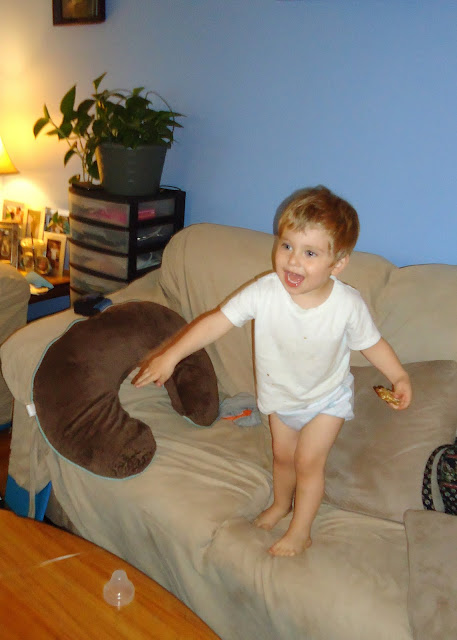 You'll notice that my child isn't wearing any pants. That's because he refused to put them on. Instead, he threw a thirty-minute temper tantrum and hid under the futon. So, fine, no pants. We don't really care that much. (You have to pick your battles, you know.) But then he didn't want to come downstairs. He stayed under the futon by himself, intermittently screaming that he didn't want any pants. (This was yesterday.) 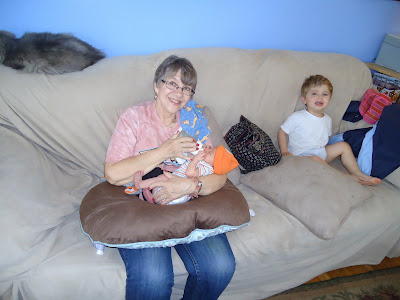 Grandma Toni has been down visiting us the last two days, partially to go on adventures with Greg and Nick. They went to the zoo Tuesday and out to lunch yesterday, so that I could relax with Henry and rest from my surgery. It isn't that Nick hasn't been getting attention--we've made a point to give him special attention lately. But check out the look on his face! He is downright ticked off that his world is changing. 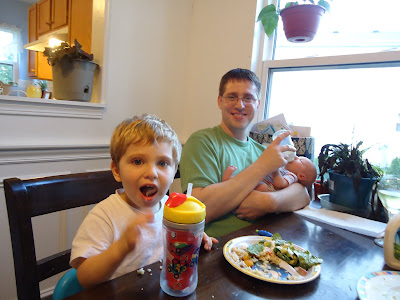 The picture above was snapped seconds before Nick flipped (totally Dr. Jekyll and Mr. Hyde style), got mad at me because I wouldn't give him a granola bar, and slapped his milk across the table at me. Some of Nick's, er, interesting behaviors have been directed at me. Nick and I have a pretty close relationship, and I think he's been somewhat resentful of me since Henry was born. He does not, however, seem to resent little Henry, thank goodness. (Seriously, how could you resent this adorable face?) 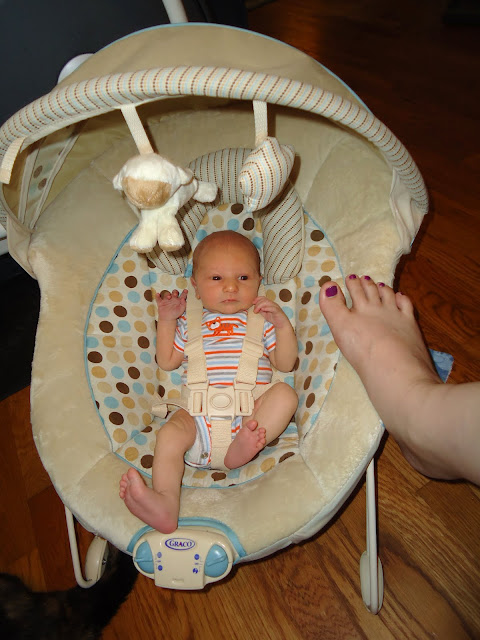 On a side note, you may notice that the swelling in my feet seems to have gone down, for the most part. Thank goodness! No more cankles.  :)

Anyway, here's the strategies we've been trying so far to help Nick adjust:

1. I've been making a concentrated effort to spend time doing something fun with Nick everyday. Wednesday morning, for example, we made homemade granola bars and I let Nick do just about all the steps. We spent nearly an hour measuring and stirring, and Nick is turning out to be quite the little chef. He loved it, but quickly became whiny as soon as we were done.

2. We bought Nick a baby doll and let him feed his baby a bottle and hold him. He's been mildly interested. Perhaps we should emphasize this more and get him to mimic us as we care for the baby.

3. Greg has been spending extra time with Nick, playing with him and letting him get tons of exercise.

4. We have several books about being a big brother. Nick verbalizes really well and sounds excited to be a big brother. It's really only me he seems angry with. Although. . . his behavior has been pretty poor lately. We've tried to be extremely consistent, and to very calmly state the rules. Time outs have been rather common this week.

So I could use some advice, from those of you who have experience transitioning an only child into an older brother or sister. Is this behavior just a result of Nick being two and having his world turned upside down? Is it just a matter of time? Or is there something else that we could try? What worked for you? Nick and I could both use some hints, because, after all. . . being a big brother is hard!
Posted by Melissa E. at 8:06 PM