During my never ending quest for cheap ways to entertain my kids this summer, I located the Joliet Kidzfest, held by Lewis University in downtown Joliet. It was a gorgeous day, and the event wasn't too crowded, even though it was on a Saturday. The boys got to pose with these guys.


Nick thought they were pretty cool, especially the jailbird, but Henry looked serious. Henry often looks serious. I wonder if he will become an accountant or something, because he always has a look on his face as if he is contemplating tax forms in his head. Or maybe he's nervous because Spikes (the other mascot for the Joliet Slammers) is supposedly a former prison guard. 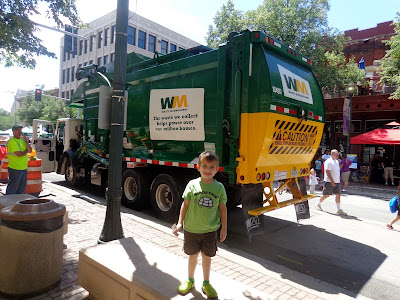 Nick was ecstatic about getting to see the garbage truck. He was absolutely delighted when the gruff but friendly garbage man let him sit in the truck. 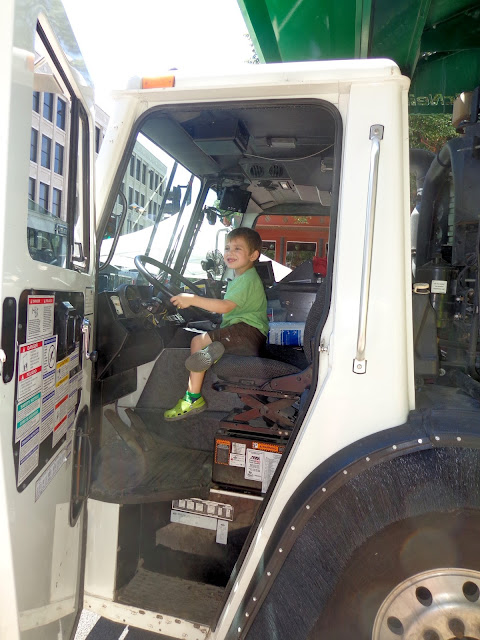 Henry wanted a turn, too, but he didn't smile. Instead, he maintained his super-serious Henry look. Perhaps he is worried about the amount of garbage these trucks take away. Or perhaps he just doesn't like to smile for pictures. 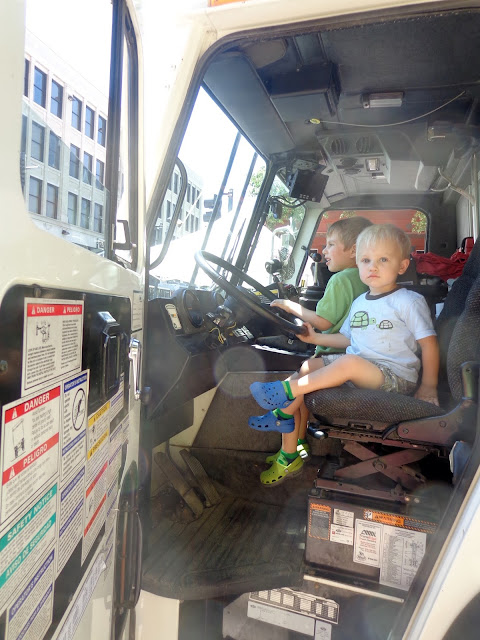 The library and park district people had tables where the kids could make crafts. The boys made bags and personalized visors. Also, they actually let my children design ladybugs with permanent markers! Brave, brave ladies.


The forest preserve was out showing kids how to cast a fishing line. Henry still didn't smile, but he loved the fishing pole. I could tell because as soon as we tried to get the fishing pole out of his hand, a major temper tantrum ensued. 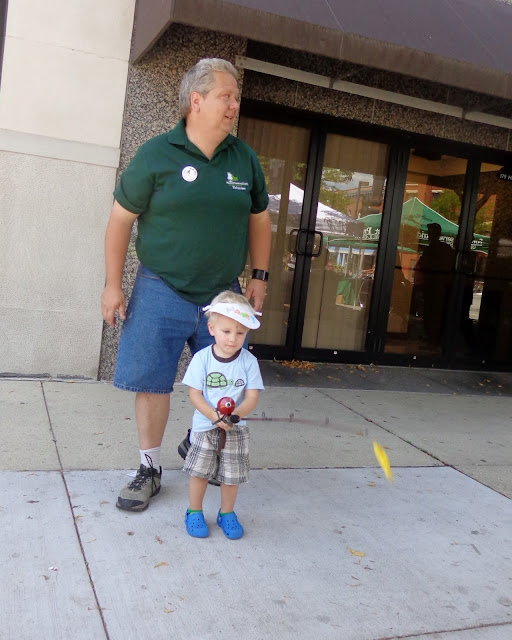 Fishing was intriguing to Nick as well, but he decided the poles were much cooler when used as pretend light sabers. That's when we decided they were done with the fishing poles. 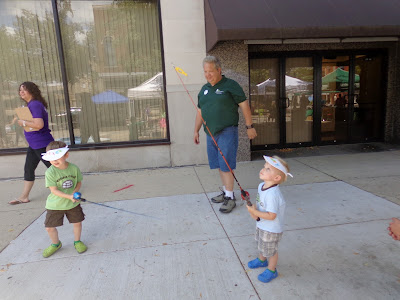 We visited the fountain next. It is a really pretty fountain, with an area below where you can dip your feet in the water. 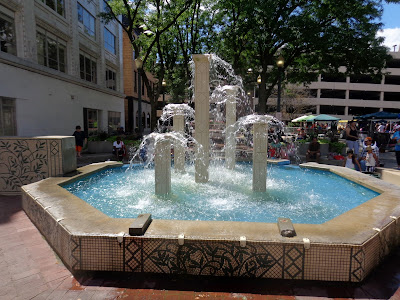 Nick started flirting with a little girl he met there. He didn't want to leave the fountain.


I practically had to drag Nick away from the fountain, and I dragged him into a candy store, where I said he could pick a lollipop. This is what he picked. What the heck do you even do with a lollipop that big? Nick just licked it for a little while, then asked me to hold it. I still have the darned thing, wrapped in plastic wrap.


Perhaps Henry was jealous of Nick's giganto-sucker. He ate his whole sucker, but still didn't smile. Do you know what finally made Henry smile? The bunny rabbit at the little petting zoo area. 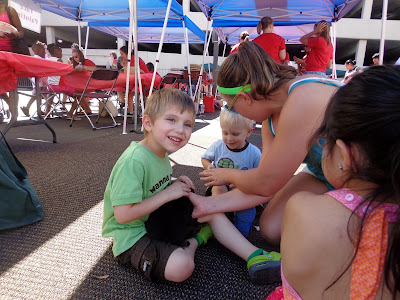 Henry had this huge grin as he squeezed that poor bunny.


I felt sorry for the poor bunny. Henry held on to him for dear life. We grabbed the bunny back quickly enough, and Henry was back to his serious self. 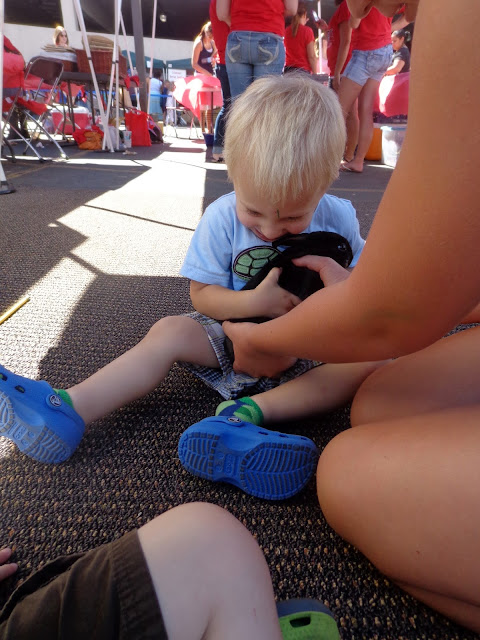 Nick wanted to stand on this police scooter thingie. I didn't even know what to tell him it was called, but Nick made vrooming noises. Henry didn't care too much. He was still screaming about us taking away the rabbit. 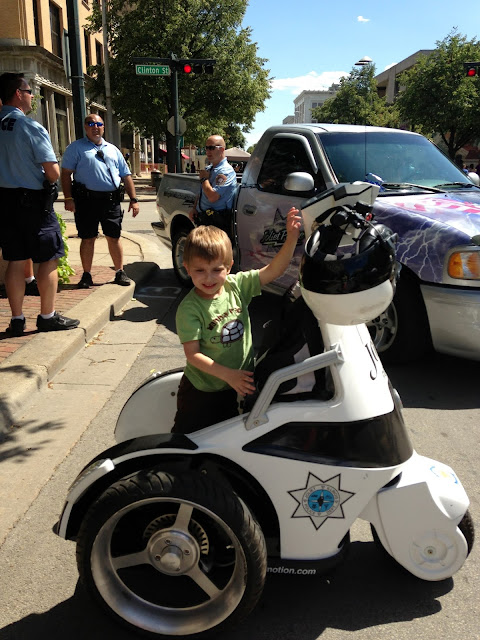 Our final activity at the fest was to have the boys pose in the Lewis University airplane. 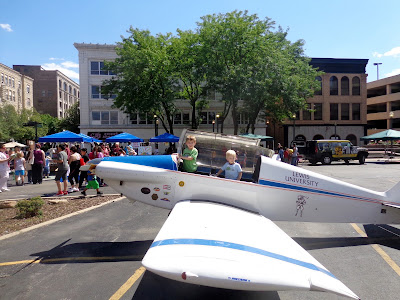 Downtown Joliet is really quite pretty. Greg and I are never sure where we live, really. Our address says Plainfield, but we're in Kendall County. Our kids go to Plainfield schools, but our public works and garbage is all Joliet. We use the Joliet Library system, and mapquest insists we live in Joliet. So, we're kind of Joliet residents. Kind of. Anyway, I thought this building was beautiful.


We had lunch at the Old Fashioned Pancake House in Joliet before heading out, and the food was very yummy. Click here for my Yelp Review of the place. Henry ate plenty, but didn't crack a smile once during his meal.


I think I just need to get used to Henry's serious nature. I know he had a great day, even if he wasn't grinning from ear to ear.
Posted by Melissa E. at 3:48 PM