Bubbles, Tents, and the Cutest Pouty Face Ever

Greg works several nights every week, and I have to find new and exciting ways to entertain my boys. Last week, I sent them to nap with the promise of "a special surprise" when they woke up. I'm going to tell you a secret. I had absolutely no idea what the surprise would be--I just knew it would get them to nap. Then, I had to think of a surprise, and make it a good one!


I decided to bring up a tent from the basement. Greg hates clutter, and often throws toys into the basement, never to be seen again. I found the tent (and its connecting tunnel) and had it set up in no time. Henry and Nick had their snack in the tent. That was the best part. Blueberry muffins and popcorn make lots of crumbs, but all I had to do is shake out the tent later on and let the birds go nuts. 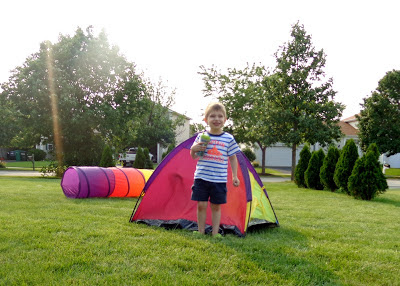 The tent/tunnel combo, by virtue of being "new" was a big hit, and the kids crawled in and out and in and out. The only issue was the wind. I had to use both toy lawnmowers to weigh them down.

The second part of the "surprise" was a gift that Grandma Patty and Grandpa Mike had given Nick for Christmas a few months back. It is a Thomas the Train bubble blower that I hadn't even opened (because we received it in winter time). After nearly taking my finger off getting the package opened, and hunting down more batteries, we were in the bubble business.


The bubble maker worked pretty well, and we all chased and popped bubbles for awhile. Then, Henry decided he wanted a turn. Henry doesn't talk much yet, but he makes it clear when he would like a turn with something.

Nick is still learning about the whole concept of sharing, so he told Henry no. This is the face he got. 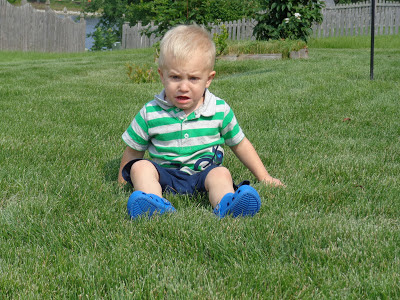 Normally, I do require Nick to share, but since this was Nick's brand new toy and he'd only had it for a few minutes, I made Henry wait for a turn. Check out this pout.

I think the Henry pout was my favorite part of our whole evening outside. I did let Henry have a turn after awhile, by the way. He loved making bubbles, but spilled bubble solution all over the grass.

I enjoy having the boys out there in the evening for some pretty selfish reasons. First of all, it tires them out, so they sleep better at night. They didn't spread toys all over the living room, which was another benefit for me. Finally, eating dinner out on the lawn means that I have no dishes to wash and no mess in the kitchen. That is what I would call a win-win-win situation.