While I've tried before to see the Balloon Glow at Lisle's Eyes to the Skies Festival, the weather has never worked out in my favor. So when I got a call last week from my friend Patty asking if the kids and I wanted to go see hot air balloons and fireworks, I jumped at the chance. Greg works Fridays, so he had to miss all of the fun. I think he was a little jealous.


We had an amazing time. Since the boys and I had already seen a fireworks show the night before at Ribfest, we were up for anything and our expectations were low. I absolutely loved this festival, and I wish we'd had more time and money to enjoy everything there. First, I did shell out $4 total so the boys could have some fun in a bouncy house. Nick would live in a bouncy house if given the option, so I wasn't surprised when he disappeared inside. I didn't even get a picture, although he did come out when time was up. But Henry, oh Henry. He completely ignored the attendant when she said time was up. Instead he used his cuteness and speed to run in again and again. He had to be tackled and dragged out of this bouncy house.

I smuggled in snacks and drinks (wrapped in diapers and clothes in my diaper bag) so we could munch while watching the balloons being inflated.

I wish I would've smuggled in more food. We ate everything in about five minutes flat. Henry made a beeline for the blueberries and pretty much refused to share. 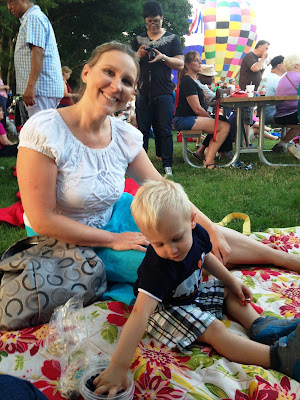 The boys were really excited by all the commotion and by the balloons getting bigger and bigger.

Hands down, my favorite part of this festival was the balloon glow. I didn't realize they would actually let us walk in the field where the balloons were inflated, and even touch them. 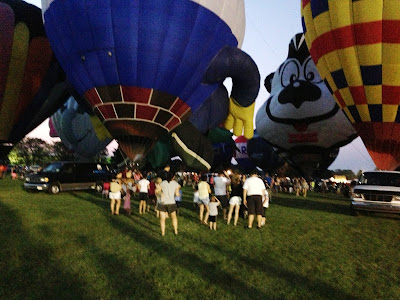 Here is Nick looking serious as he was trying to figure out how the balloons stay up. He figured it out once they starting firing up the hot air. Nick was absolutely terrified of the sound, and we had to calm him down a number of times. He covered his ears and curled up in the fetal position and everything. Funny, though, as soon as the noise stopped, he was fine, though he didn't want to get close to the baskets where the fire was being turned on. 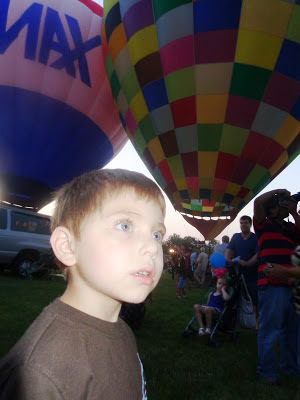 The balloons looked awesome when it was still light outside, but as the sun was setting, they'd count down and fire up the, well, fires all at the same time. Thus, the "balloon glow." 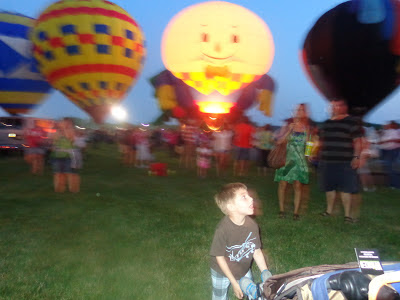 Nick was the photographer for this picture. Does it scream "taken by a four-year-old?" Not sure.

I was surprised at how close together the balloons were, and how close they let us get. We even touched a few. The foot of this creature kept tipping over and all the kids would crawl under it, giggling. 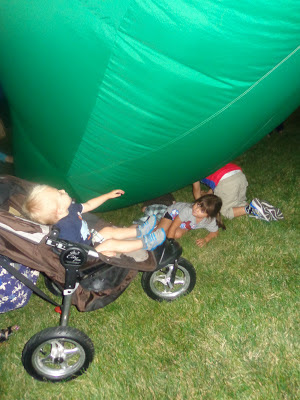 After the balloon glow, we fond seats on this huge hill and listened to music while waiting for fireworks. We enjoyed a dinner of kettle corn and funnel cakes. 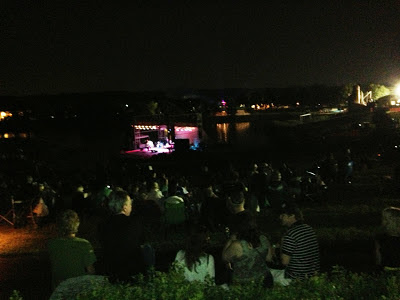 Oh, and Nick's reward for letting us take his picture all evening? Italian ice. Did you know how much the dye stains the skin of little kids? Neither did I, until I (thankfully) realized that it was cherry juice on Nick's legs and not blood.  ;) 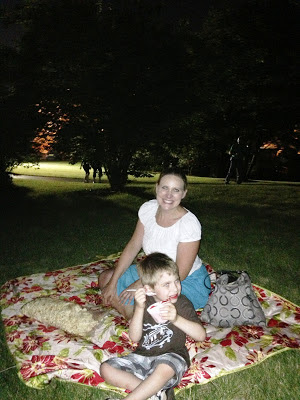 Henry managed to spill his blue Italian ice down his legs and all over his waist. He even spilled some down his diaper, so when I changed his diaper his rear end was blue. 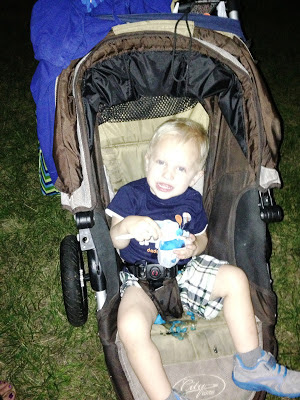 The fireworks were pretty decent considering it was July 5th and the big show had been on the 4th. For the second night in a row, I didn't get home until midnight. It was worth it, though.  :)
Posted by Melissa E. at 4:23 PM