My usual Saturday routine is to wake up and search the internet for things to do with the kids. Thinking ahead might be more efficient, but it hardly ever happens. My goal is to find something unique that will get the boys out of the house and engage them, while also tiring them out for a good nap time. I found this link to something called the "Touch-A-Tractor" event up in St. Charles, and I decided to take them. Oh, and we did. Touch tractors, that is.  ;) 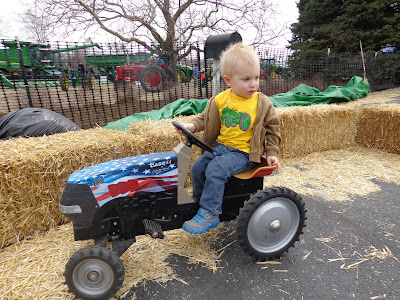 The first thing the boys saw when we drove up was these little pedal tractors. They were so excited to try out every one, even though neither is very good at pedaling. Nick hasn't picked up on quite how to pedal yet, and Henry's legs are still too short. I think the tractor shirts helped, though. I went digging around this morning and found a tractor shirt for each boy to wear. Henry's is actually one of Nick's in a size 4T from last summer. I have no idea why it fits Henry, who typically wears a size 18 or 24 months. Nick said his shirt was better because it had THREE tractors on it. 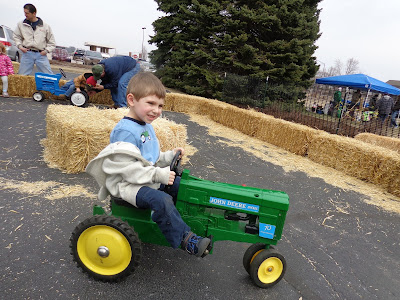 After riding the pedal tractors, the boys strolled over to the farm toys, which kept their attention for cumulatively over an hour. 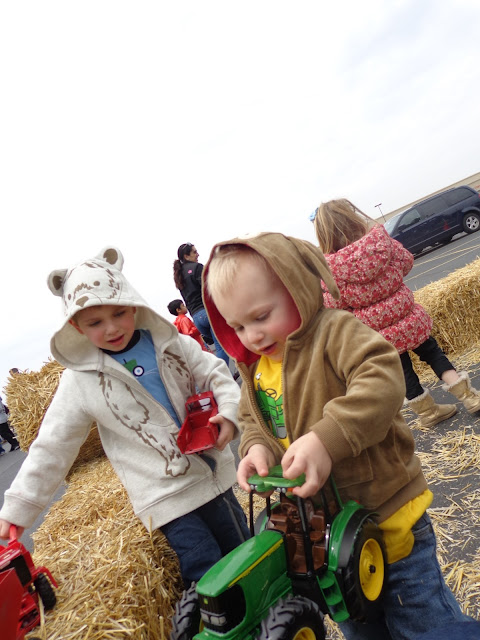 Henry has been trying out words, and a new one he learned today is "tractor." He adored playing with the hay, the tractors, the combines, and the pickup trucks.

Nick was enjoying playing with the fancy machinery. 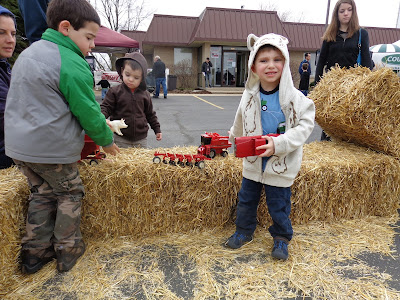 They hay was particularly interesting to the kids. Henry kept putting it in the tractor and on the combine. 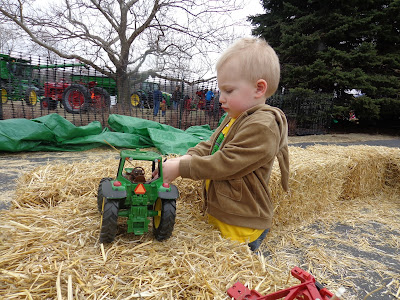 I practically had to drag them away from this area, but I was determined that the boys would get to climb on real tractors. There were plenty of those! 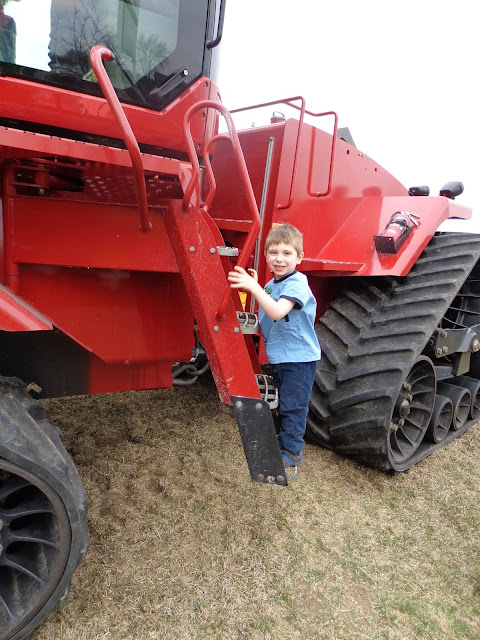 Nick never did make it up the stairs of the larger machines. He still has a decent fear of heights since breaking his arm when he was Henry's age. 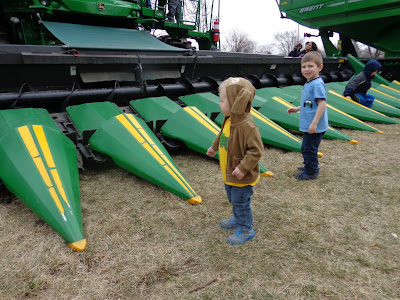 This is a combine, according to the sign, and the boys loved playing on it. 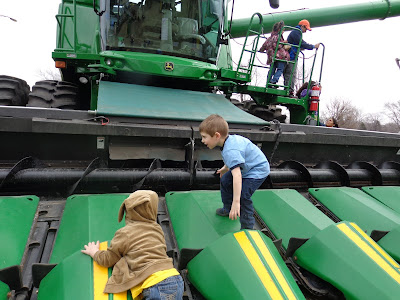 What they liked even better was "driving" the tractors. I'll admit, it looked like it was pretty fun. 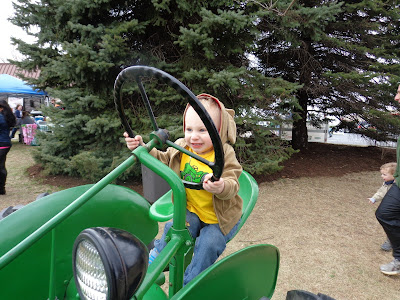 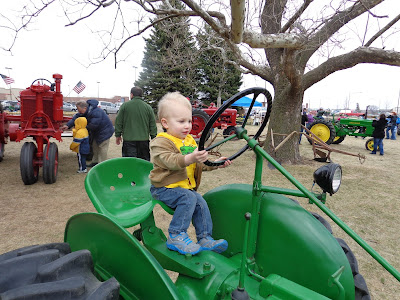 I tried to have a conversation with Henry about the tractor. Here's what happened. 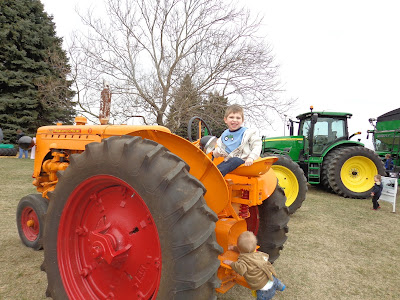 There weren't just tractors, though. They also had a nice bin of corn for sensory play. 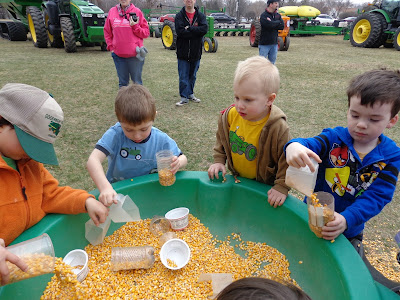 Nick really liked the corn. I snapped this picture just before he face-planted into it. 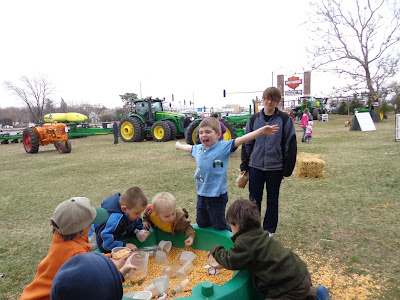 Surprisingly, Henry knew not to eat the corn, and he scooped and poured it just like all the big kids. 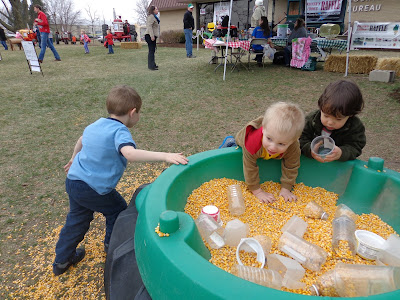 If I had needed to kill an hour, we could have stayed by the corn bin.

Eventually, though, we decided to go see the animals. There were only a few, and the farm animals were not terribly eager to interact with young children, but Henry liked making the animal noises. 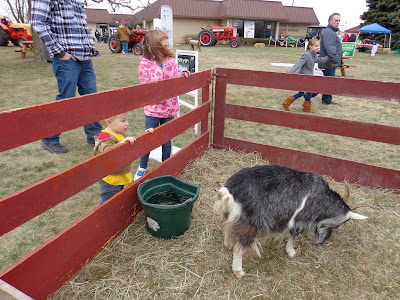 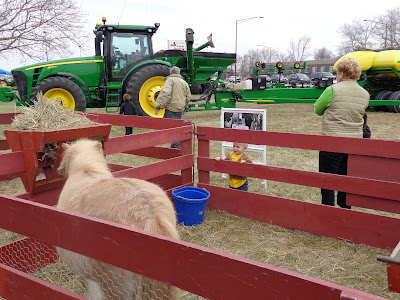 They both loved climbing on the fence. 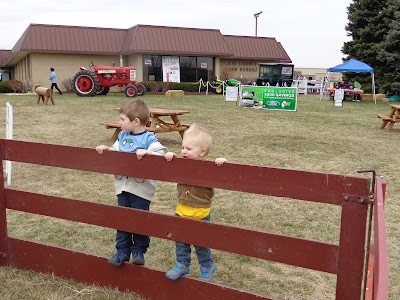 Since the real animals weren't too keen on being petted, they boys rode these facsimiles. 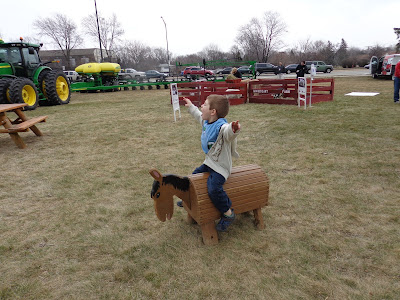 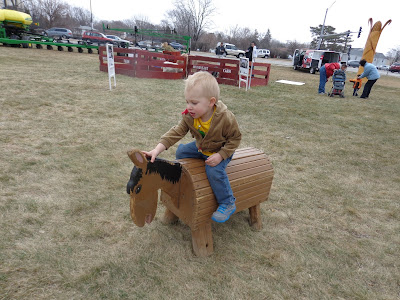 Out of everything, I think Henry's favorite thing was getting to see the baby chicks. 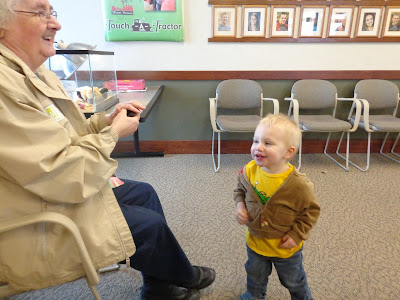 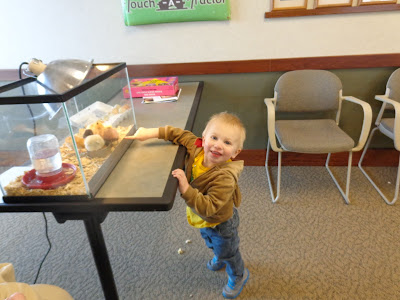 He kept running up to them and shouting "Sicken!" He can't say chicken very well, but I'm pretty sure that's what he was saying. 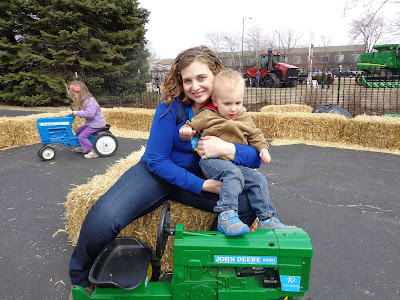 For a small, free event, I think they did an amazing job making the experience educational and enjoyable for little kids. I would love to take my kids back again next year.
Posted by Melissa E. at 9:24 PM