Howling at, well, everything!

This week has been howl-worthy, that's for sure. After a massive downpour on Wednesday, we were virtually trapped in the house until Saturday morning, due to the flooding. For the first time ever, I had rain days off from school, mostly due to the fact that many roads were underwater. So by the time Saturday arrived, complete with sunshine, we were ready to get out of the house. Our planned event, The "Go Fly a Kite" festival in Wheaton, was canceled because the park was underwater. I had to find a plan b, so I consulted the almighty google. My answer: Big Run Wolf Ranch was having an open house. 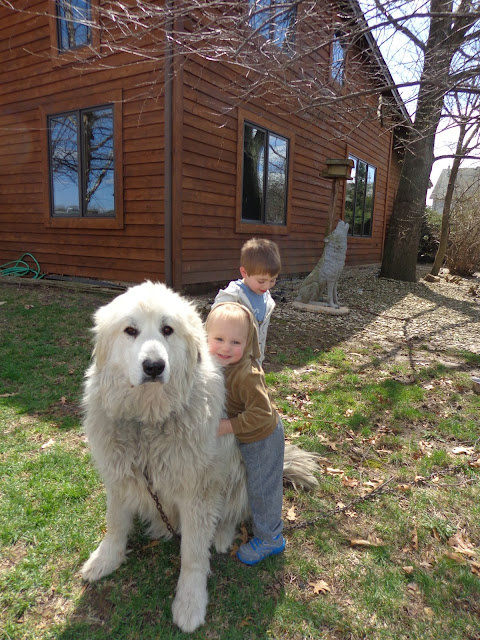 No, this is not a wolf. Max is a Great Pyrenees dog, and the friendliest canine I've ever met. He even tolerated the plethora of Henry hugs, which aren't always gentle. This ranch is out in Lockport, which is maybe a half hour or so from our house, but I couldn't bring the stroller. I took the boys on a shuttle bus, and I can't carry Henry and a stroller onto the bus at the same time. Chasing, therefore, was my exercise for Saturday. No wonder it's called "Big Run Wolf Ranch." I did so very much running. 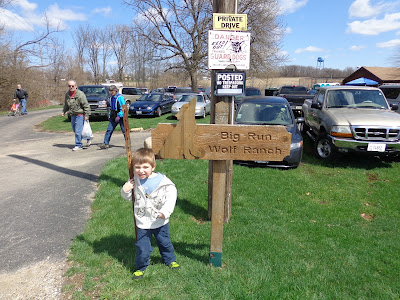 Because this ranch is run exclusively to take care of animals who cannot make it in the wild, I felt pretty good about supporting its cause by visiting. The wolves were magnificent, and they tolerated my children howling at them pretty well. I guess they're used to it by now. These are arctic wolves. 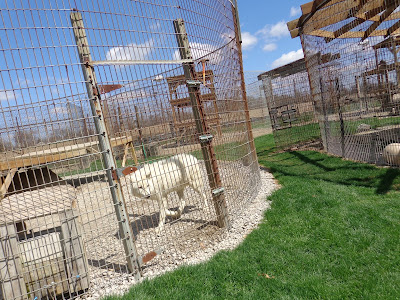 We did some chicken chasing, as well as some turkey chasing. Henry excels at this sport. 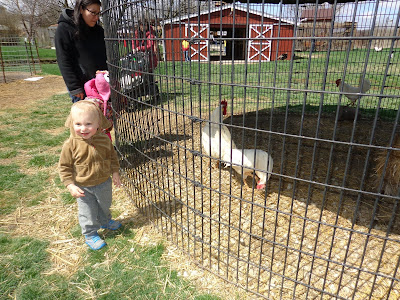 They liked the free range birds the best, especially the roosters, who did indeed "Cock-a-doodle-doo." 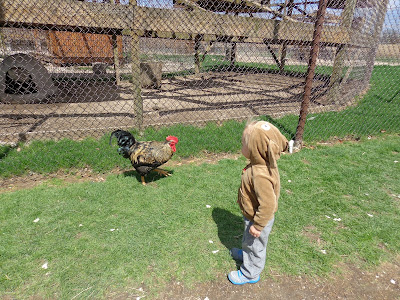 While we were checking out the wolves and the cougar, Nick and Henry kept running for the creek. I was afraid of having to jump in to save them, so I had to carry Henry most of the way. 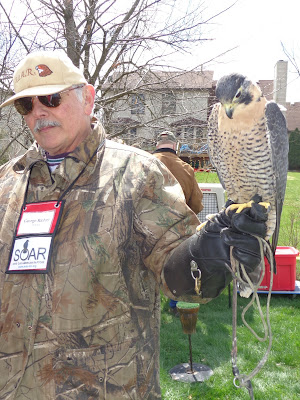 The sunshine was refreshing after an entire week of rain, even if it was pretty chilly. I wonder if you burn more calories with the  adrenaline rushes that come when your children head for a creek and you must catch them in time? 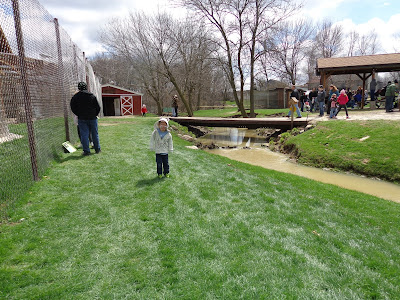 SOAR (Save Our American Raptors) was visiting this event, and Nick loved watching the birds of prey. They had a peregrine falcon, a great horned owl, a bald eagle, and several hawks. It was really neat seeing them up close, but every time I put Henry down, he ran toward them. He was determined to become a snack for that eagle. Either that or he just wanted to pet him. 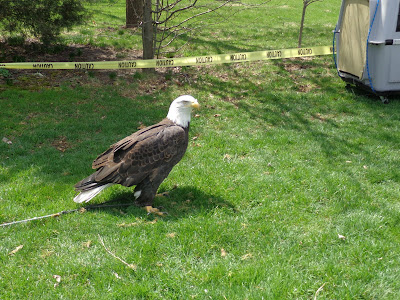 The second I snapped the picture below, I had to grab Henry, because he was trying to climb under the barricade. 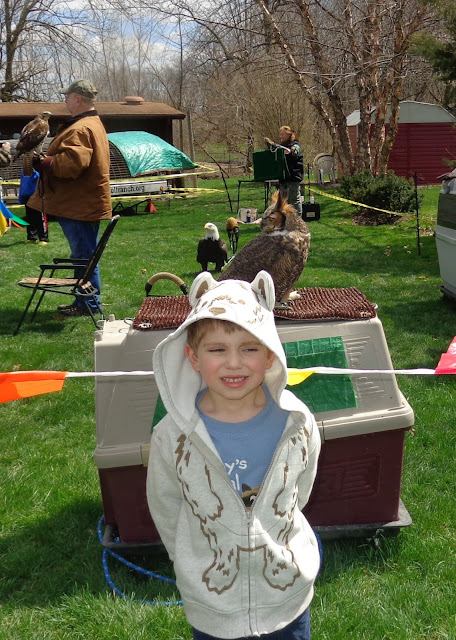 One of the birds was injured, and Nick was concerned. Nick said he wanted to help the birds, and I told him the best way to do that is to donate money. He took some singles out of my purse, and then Henry copied and did the same thing. Henry is fascinated by money lately. Maybe it's because he doesn't see it much--I usually pay with a debit card. 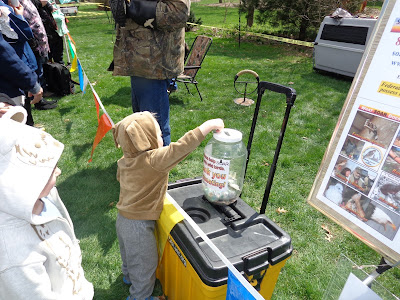 Another fundraising effort was the face painting. Nick had a valuable lesson in waiting his turn, because I had Henry go first. Doesn't he look cute as a wolf? He even has the doggie ears on his hood to go with the face paint. 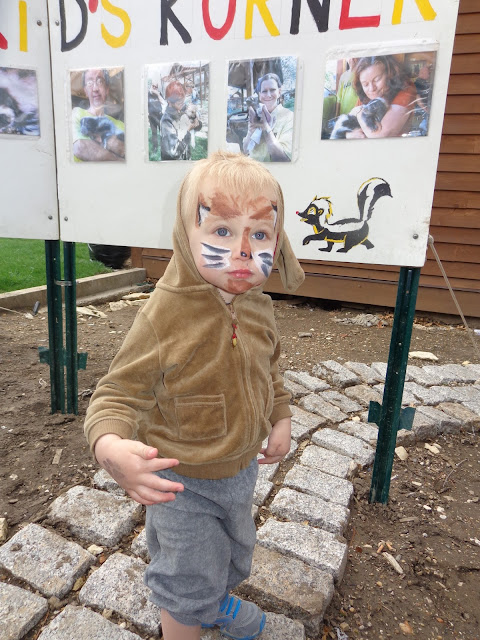 Nick decided he wanted to be a porcupine. I think he is sure prickly enough, especially on days when he doesn't have a nap. What do you think? 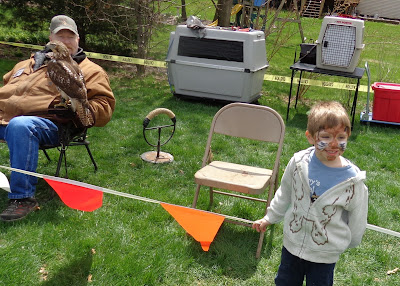 Since it is a wolf ranch, after all, Nick decided to practice his howling. Henry tried to copy him, but he sounded more like an owl. 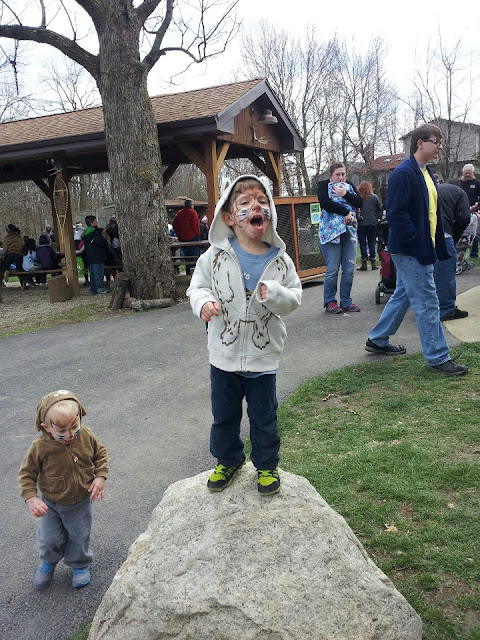 I asked Nick what his favorite animal was at the ranch, and he said "The skunk. He was soft." This is true. I have never pet a skunk before, but this one seemed as tame as a cat, albeit with longer claws. 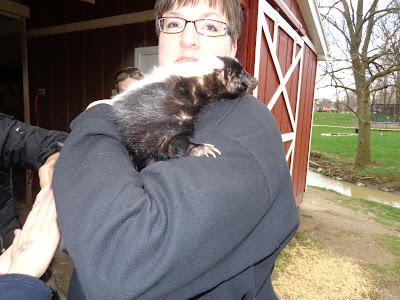 I let each boy pick out a stuffed animal as a remembrance of our trip. Nick chose a skunk. I wasn't surprised. After all, he can be quite the stinker. Henry chose a very cuddly wolf. 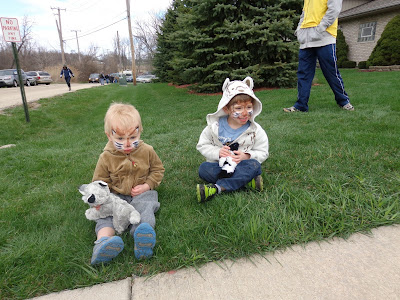 All that howling and running around made us hungry, so we found Honeyfield Restaurant, ready to feed the beast inside all of us. Nick's beast wanted chocolate chip pancakes, and I indulged him. He also tried to create his own juice by mixing jelly into his water glass. I have to give him credit for scientific ingenuity, but the experiment was a wash. Meaning, of course, that I had to wash all of his clothes as soon as we returned home. 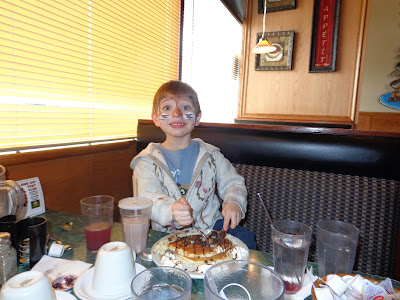 Henry pigged out on sausage and waffles, and wolfed them right down. 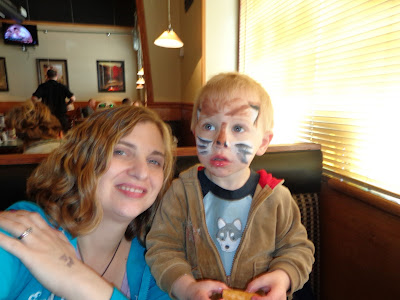 When all the howling and scarfing was done, nap time beckoned.
Posted by Melissa E. at 8:50 PM