The unseasonably warm weather today inspired me to take the boys outside for some fresh air and exercise. They like to copy what I'm doing, so today we worked in the front yard. We dug up clover, which is slowly devouring my front lawn and landscaping.

I'm not sure how this much clover got into my landscaping, but by the end of last year it was everywhere. We dig it up and it just keeps coming back. This year, I'm determined to fight the clover.


Nick listened carefully to my gardening chatter and asked questions. "Mommy, what does insidious mean?" I explained that clover is insidious because at first there's just a little bit growing slowly, but then pretty soon it takes over and kills the other plants. Nick kept repeating that word, over and over again, chanting it at the clover as he dug with the shovel. "Insidious! Insidious! Indisious! Innisious!"

While Henry is definitely bigger and more coordinated than he was last year, he's at a really frustrating stage in his development. He understands so much of what we're doing and talking about, and he wants to help and participate. But his speech is pretty delayed, so he can't talk much, and he's not really big enough to do much damage with a shovel. I still praised him for smacking the clover with his plastic shovel, though.

Actually, once we took a break from the digging, Henry ended up being very helpful. He likes to pick dandelions, and he picked every single one from the front lawn. We're talking probably 30 dandelions. Henry can't say flower yet, so he said something that sounded like "owwa!" when presenting them in a pile at my feet. He reminds me of how cats sometimes proudly drop a dead mouse in front of their owners.

I forgot how much exercise I can get just from being outside with the boys. Henry-chasing keeps me pretty busy, and I usually can't sit outside for too long without plucking, digging, or weeding something. Today I was pulling out the old sticks from my autumn joy. The boys assisted and then used the sticks for poking. 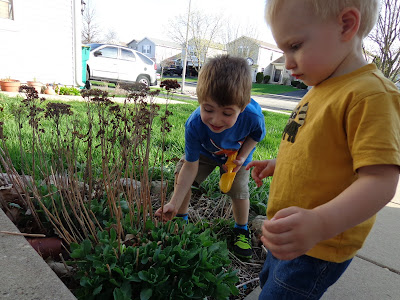 I had to explain the difference between tulips and dandelions to Henry. He really, really, really wanted to pull one of these pink ones.


When I'm feeling down, being outside in the sunshine is the best way I can think of to help myself feel better. Spring is such a hopeful season, and watching (or chasing) my kids around the yard almost always seems to improve my mood. Though I will say that they needed quite the bath tonight. Gardening is dirty work!