A Harrowing Tale of Maternal Heroism and Bruising

Last week I did a very brave thing; I took Henry and Nick to the McDonald's Playplace as a reward for Nick staying dry all day. This one small decision resulted in quite the experience, and I'm certainly not talking about the cuisine. 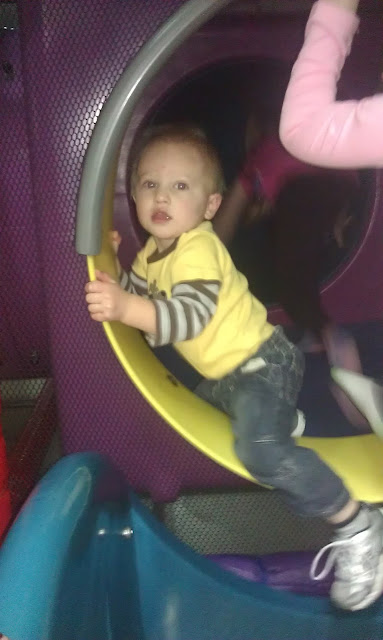 Henry loves playing with the big boys. Nick disappeared immediately into the tunnels and slides of the playplace, and only once or twice did I actually speak with him over then next hour. Henry was a little more reticent. I sat at a nearby table watching, and Henry would walk to the entrance, then come to me for a hug. Every time he'd go a little farther into the tube, and this table full of like, 7 dads, were cheering him on and clapping for him. "You can do it!" "Go for it, little guy!" Henry was loving the attention and dancing in between climbing attempts.

"Maybe," I replied. "He's a climber, but he tends to be a little hesitant." While I was answering this question, Henry somehow disappeared. "He went in there!" said a little girl, pointing towards the tunnels. I stuck my head in but couldn't see him. A few minutes later, I looked up. Way, way up. Only then did I see Henry. 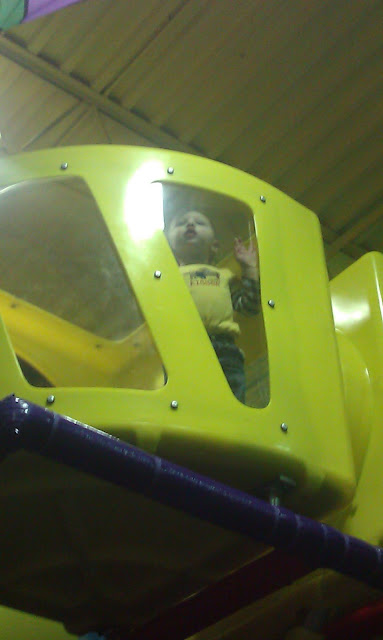 Henry had climbed nearly to the ceiling. He was excited and curious. He kept slapping the clear plastic to get my attention, then waving and laughing happily. "How long do you think he'll stay up there?" another one of the dads asked?

"I'm not sure," I replied, "I'm just worried about how he's going to get down." I asked an older girl to go up and check on him. She said he was starting to get scared but wouldn't come to her. Just about then Henry started looking perturbed. 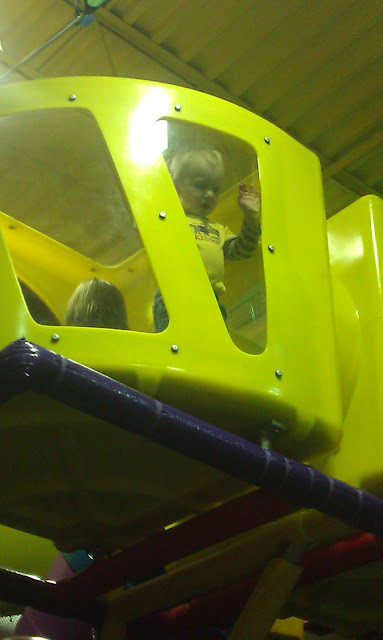 Now, this McDonald's PlayPlace goes pretty high up, and I had some sort of illusion that Nick or another one of the bigger kids would help Henry down. Apparently, though, he was too scared to do anything but bang on the plastic and hold his arms out for me. "You know," said another one of the helpful parents. "You're probably going to have to go in after him."

I sighed rather loudly, and one of the encouraging dads said rather loudly, "You know, you're just doing what all of us would love to do. Climbing in there looks like fun!" (I disagreed silently but smiled as I climbed into the tunnel, which was inhabited by at least 25 children. It smelled like plastic and bleach water, though I suppose the scent could have been far worse.

I am very glad I dropped about 30 pounds in 2012, because otherwise I would've been like Winnie the Pooh, wedged in a tunnel, bloated by my double cheeseburger. Regardless, this was not a simple climb. My knees, shins, and ankles are covered in bruises, some of them quite large and dark. I look like I was in a boxing match with a very short opponent. The children inside the Playplace didn't seem to notice or care that a rather large adult was climbing, too. They just climbed over me, jumped on top of me, and used my shoulder as a place to push off with their shoes. Thanks to my sneakers and my determination to save my child, I did get up to where Henry was, and not a second too soon.

He was sobbing and banging on the plastic until he heard my voice. Then, he held his arms out and ran toward me, wrapping his arms around my neck like a vice. Poor Henry was really scared. I asked the girls who'd been watching him what the fastest way down would be, and they pointed up. "The slide is the quickest, but you have to go up more."

Only the power of motherly love gave me the strength to climb up that last tube with a 25 pound toddler attached to my neck. I smiled in relief when I saw the slide, and had Henry sit on my lap.

Unfortunately, the last ten or fifteen feet of this slide had very little angle to it. Most little kids just sit up and scoot out of the tube. I was far too tall to do this, and I had Henry attached to me. I am very glad I don't have a picture to share of me lying on my back with Henry on top of my stomach as I wiggle my feet and hips, trying to get to the bottom of the slide.

Finally, another mother took pity on me and crawled in to grab Henry. Then, I was able to flip over and scoot backwards out of the tunnel. When I finally picked up Henry and stood up, so did everyone else in the McDonald's, cheering and clapping loudly. That, my friends, is how I got a standing ovation at the McDonald's. Henry thought they were clapping for him, so he started clapping, too. We were practically minor celebrities. I hobbled to a chair and nursed my bruises for a few minutes before heading home.

I understand a little bit about how mothers will do anything to save their children. Even brave the tunnels at McDonald's. Yes, even that. I guess I'm braver than I thought. And I have the bruises to prove it.  ;)
Posted by Melissa E. at 10:41 PM