Henry's Trip to the ER

I got a scary call at work today, from my mother-in-law, letting me know that Henry had fallen onto the cocktail table and gotten a pretty bad cut near his right eye. It was deep enough that the speech therapist who was visiting thought it might need stitches. I'm lucky enough to have a job is understanding when I have to leave for a family emergency, and I immediately starting driving home to pick Henry up and take him to the doctor. When I called the doctor, they said he needed to go to the Emergency Room.

As if I wasn't anxious enough, today was a snowy day. After a treacherous drive to work this morning, I was happy to see that Route 59 was mostly cleared. What many people didn't notice, though, until it was too late, is that the snow had blown sideways and completely covered the stoplights on all the southbound traffic lights. You couldn't see whether the light was red, yellow, or green, and not everyone was as cautious as I was. I stopped at each intersection and used the lights I could see on my left and right to judge when it was my turn. The three accidents (one involving a semi-truck) I passed on the way weren't so lucky, and I saw two near misses where a southbound car looked at the traffic light, didn't see red, and just blasted into an intersection in front of other cars. By the time I got down by 111th street, the entire southbound stretch of Route 59 was closed down and I had to cut down the back roads. I still don't know how I kept my cool. I was worried about Henry and about the snow and crazy drivers. I was so happy to get home and hug my little man, who was strangely content given the blood running down his face. His cut didn't look too bad until you saw how deep it went. He also wouldn't let us clean or touch it. I was very afraid Henry would need stitches.

We waited in the waiting room for over an hour, and Henry fell two more times while running around. Once he tripped on the carpet and whacked the back of his head on the baseboard of the wall, and then he tripped over a chair leg and faceplanted into the carpeting. Neither event fazed Henry for more than a 20-second cry. While Henry was pretty low-key, I was really anxious. I was remembering how I'd hated seeing him in pain during his surgery, and dreading having to hold him down if he needed stitches.

Thankfully, the doctor said that even though the cut was a pretty deep gouge (it is actually worse than it looks in the pictures), stitches were only an option. She said that sometimes stitches make scars less noticeable, and sometimes they make them worse, and there's no way to tell which way it will go. So I decided on the less traumatic option. We left the cut open, and we'll give him a bath every evening and then add antibacterial ointment to prevent infection. 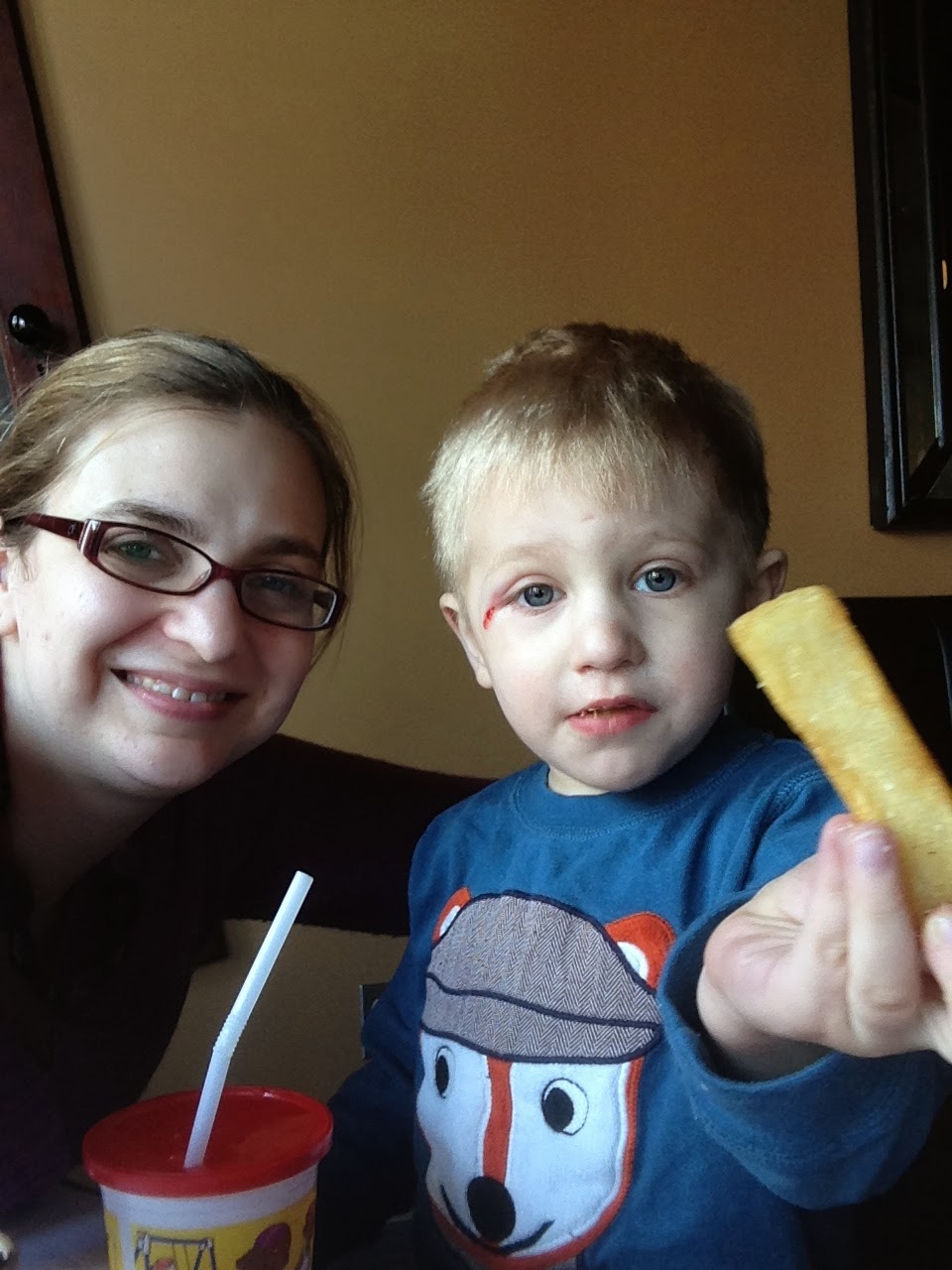 The doctor was a little worried about head injury, but she didn't think it was a concussion, despite a reported headache and some observed dizziness. She told me to watch how he ate his lunch (which was at, like, 3 p.m., due to the ER wait) and be careful for vomiting, which is a sign of concussion. I took my boy out for a burger and fries. He stole most of the french fries, and kept them down all day, so I'm assuming he is just fine. 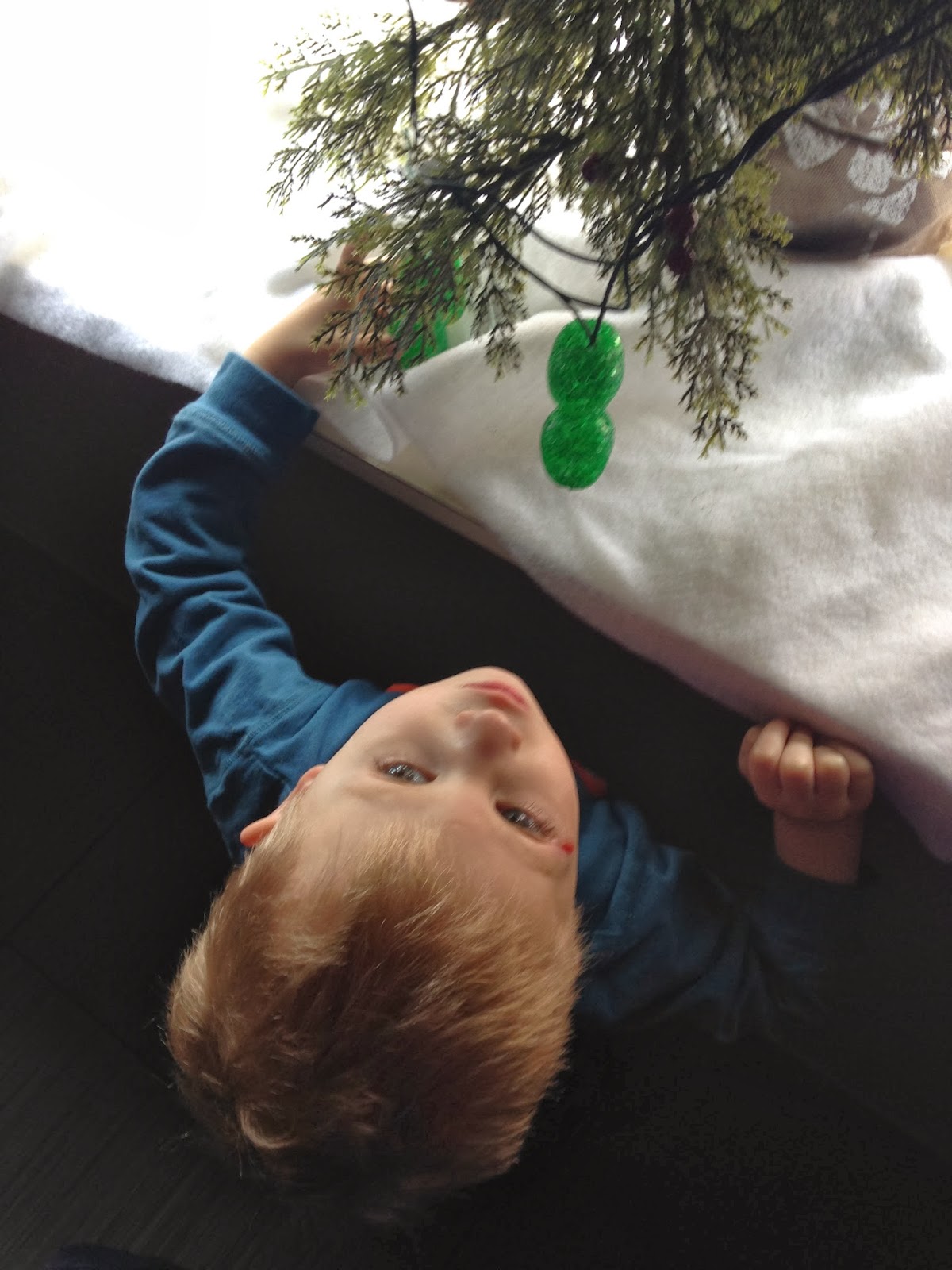 We had lunch at Hopscotch and Vine, in Downtown Plainfield, while I was waiting for our prescriptions to be ready. Henry found this tree with shamrocks on it in honor of St. Patrick's Day. He kept wanting to squeeze the shamrocks. 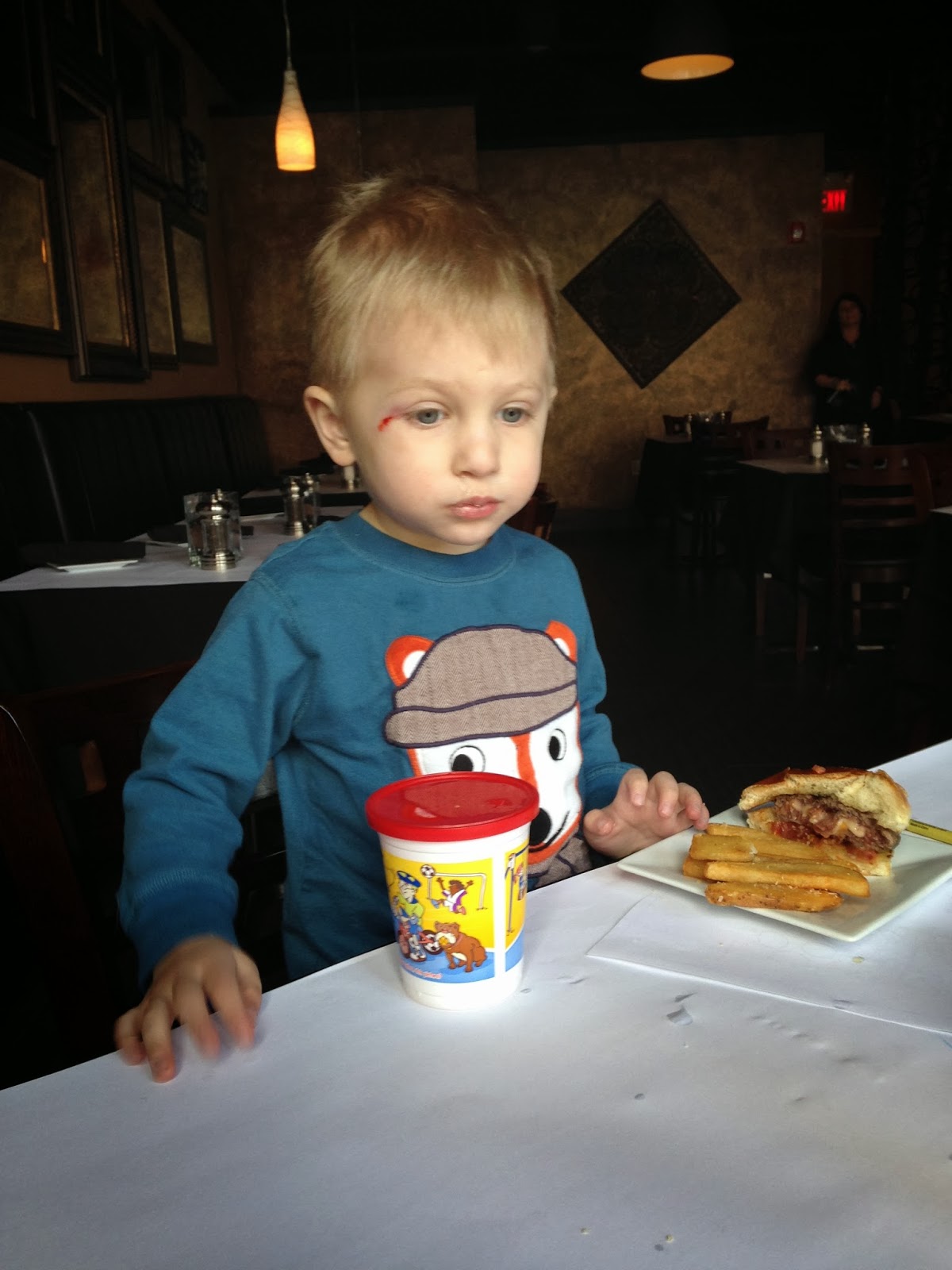 As a mother to two very active boys, I'm sure I'll make many ER trips over the years. Hopefully most of them will be minor ones like this one.
Posted by Melissa E. at 8:28 PM