Henry's Trip to the Hospital: Day One

We woke up extra-early on Black Friday morning (4:30 a.m., to be exact), but not for the usual reason. Our appointment at Good Samaritan Hospital was at 6:45 a.m., and we didn't want to be late. I've heard of Black Friday traffic jams, and we weren't taking any chances. 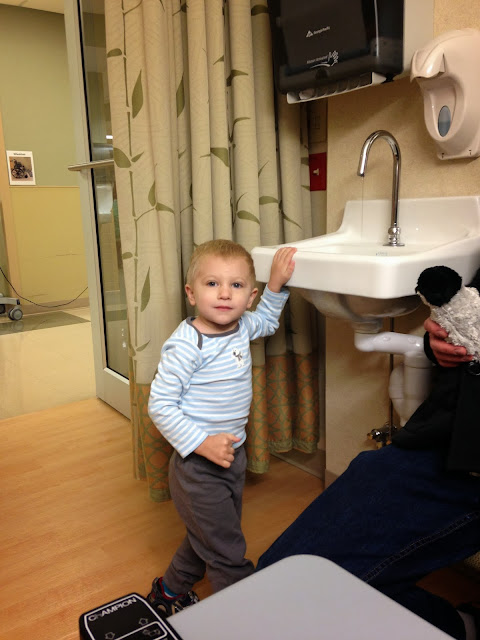 There were no traffic jams, and Henry was at the hospital and ready in plenty of time. They couldn't find a hospital gown small enough to fit him, so we had to make do with this green one. The red socks he's wearing were about five sizes too big as well. 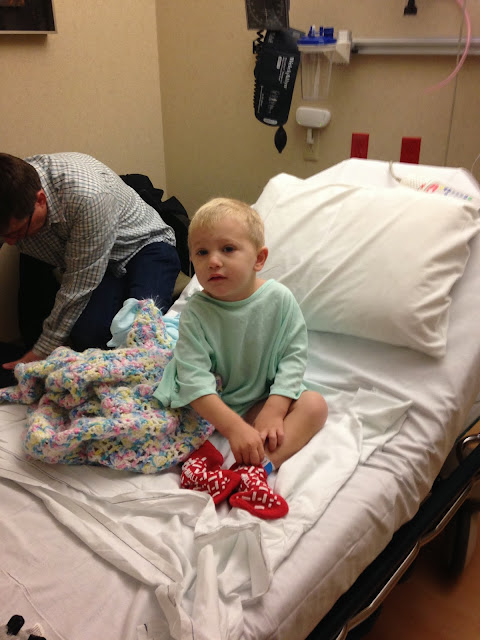 While we waited for the doctor, Henry practiced using the pulse-ox meter on his penguin, "Einstein." Being two-years-old, he didn't understand what was going to happen and wasn't scared at all. Thankfully, this hospital makes sure the kids are asleep before they start an IV or do anything invasive. As they wheeled him away, I don't think he even minded leaving us. 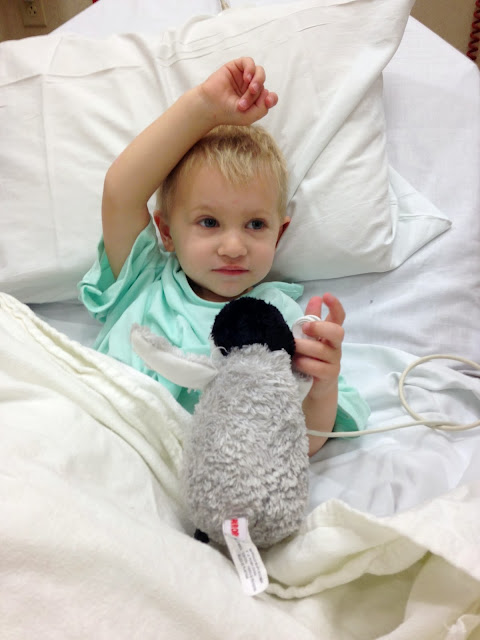 I cannot remember the last time I felt as scared as I did during the two hours of Henry's surgery. I don't think I took a full breath until the doctor came in to tell us that the procedure was a complete success. Waking up from the anesthesia was really hard for Henry, and they called us back as soon as he was conscious. In recovery and for several hours afterwards, Henry vacillated between screaming while trying to tear out his IV and snuggling with one of us in a chair. 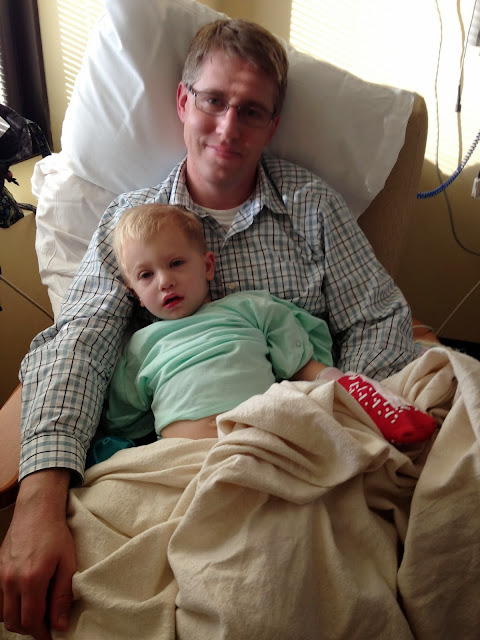 Henry's surgery is all internal, on his soft palate, but there are many, many stitches in his mouth, and lots of those stitches pulled together muscles. So unless he's yelling at you and his mouth is open, you can't see the stitches. I promise, though, there's some very intricate needlework on the roof of Henry's mouth. 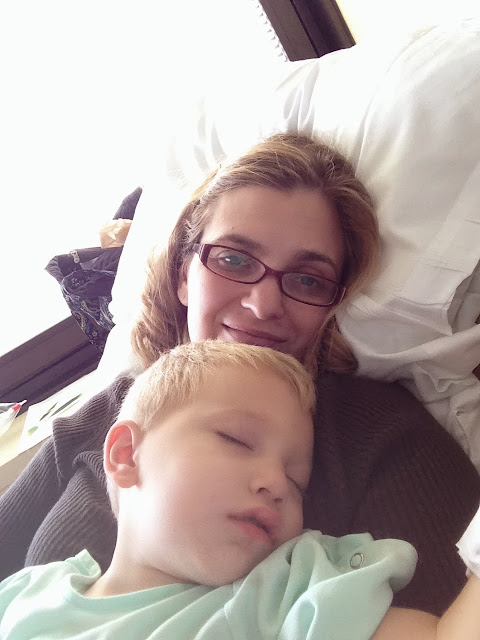 Henry tried to eat some jello and drink some apple juice, but all of the medications must have given him a tummy ache, because he later got sick. Despite the fact that he only had a few bites, he clutched that bowl of melting jello cubes all evening like it was a security blanket. 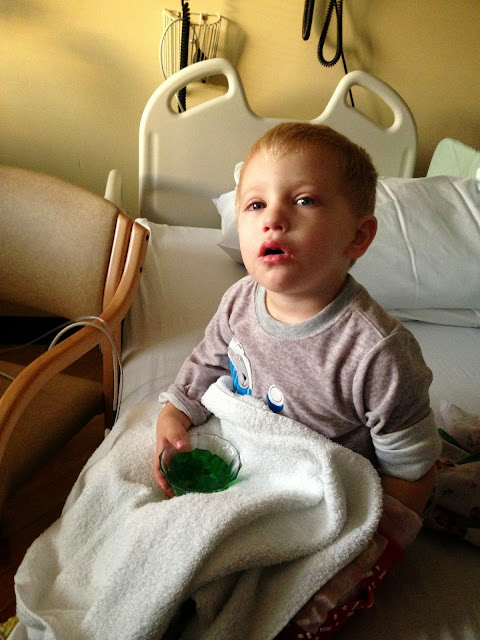 I remember from my own hospital stays that having on your own, comfy clothes is better than wearing an ill-fitting hospital gown. The nurses let me put on Henry's polar bear jammies, and I think he felt a little more comfortable. Staying in a hospital room all day can make everyone a little stir crazy, though. 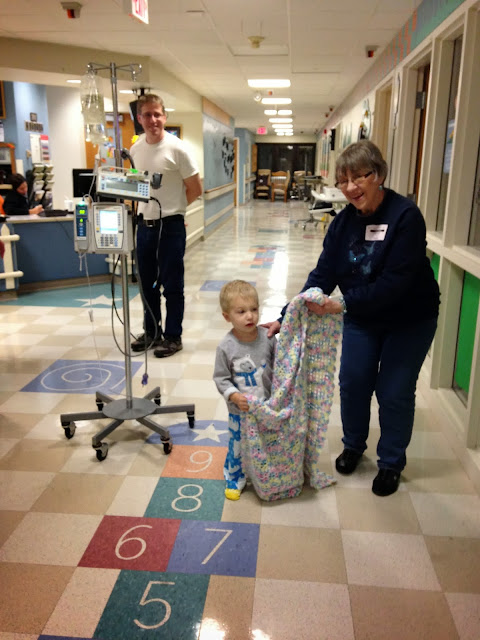 At one point in the evening, Henry felt well enough to take a little walk down the hallway. They have a fish tank, though I think Henry was too out of it to really notice the fish much.

One thing I like that hospitals do nowadays is they attach a little GPS bracelet to your child's ankle so that they can't get lost or taken. Henry kept going out of range and setting off all of the alarms. I told Henry that this had better be the only time he ever wears an ankle bracelet to track his movements.  ;) 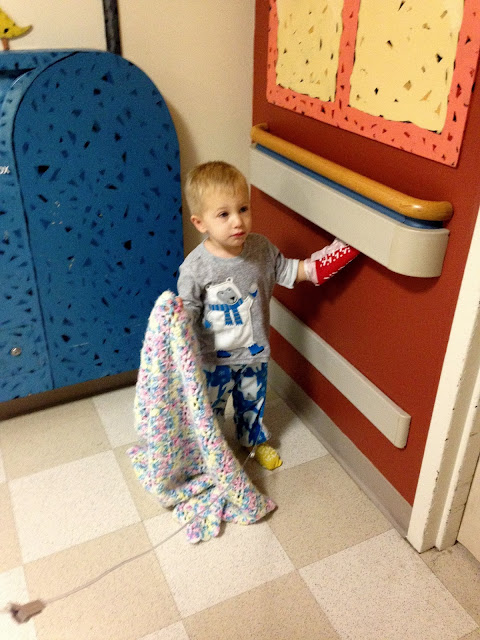 After Henry got tired, our nurse suggested we push him in the wagon to give him a little change of pace. It really seemed to relax him, and he only got mad when we told him wagon time was almost over. 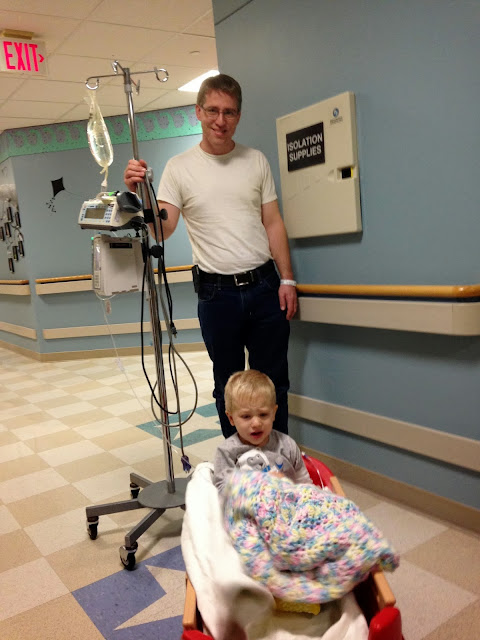 Henry was able to eat only a few bites of pudding, and then he passed out cold. The dripped pudding looked almost like a handlebar mustache. 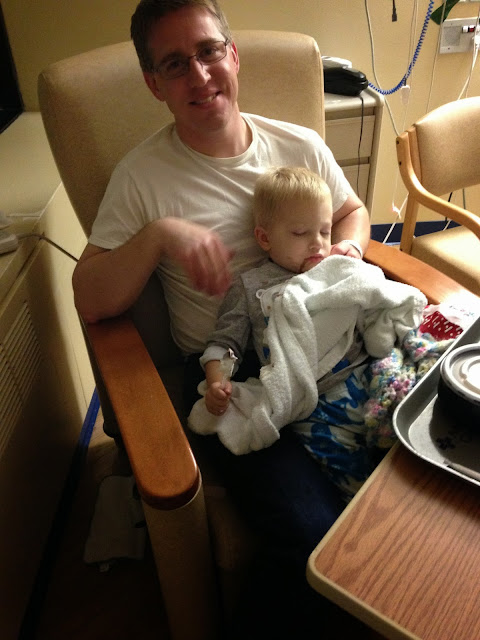 Greg left for home, and I stayed with Henry. He slept cuddled in my arms, waking every hour or so either when a nurse came in or when Henry started crying and telling me that his mouth hurt. It was a rough night, but I'm glad I was able to be there with him the whole time.
Posted by Melissa E. at 7:05 PM