The Saint Patrick's Festival at the Irish-American Heritage Center

We went to the Irish-American Heritage Festival on Saturday with my friend Lynn and her son Aidan, and had a blast. Nick looks rather dashing with this cap on, don't you think? Lynn and her family are most definitely Irish, and what could be more fun than an entire festival set up to celebrate the Irish culture? 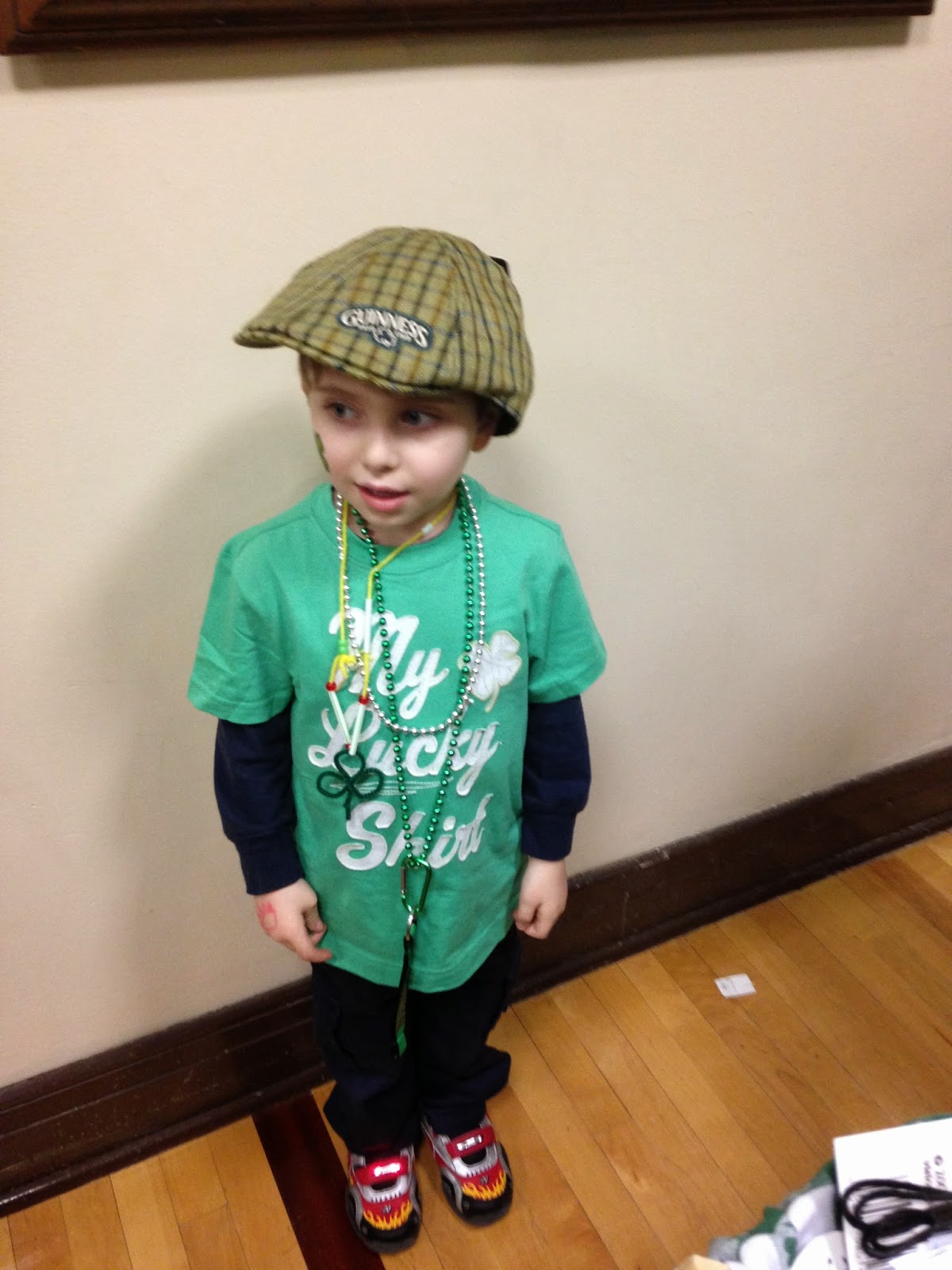 This festival necessitated a drive into Chicago, which is not a normal place for me to drive, especially in the minivan. But it was worth it. I actually found a normal parking spot, which was a miracle since I cannot parallel park a car, let alone our van. We drove to the north side and walked a few blocks in some brisk and yet mostly sunny weather. 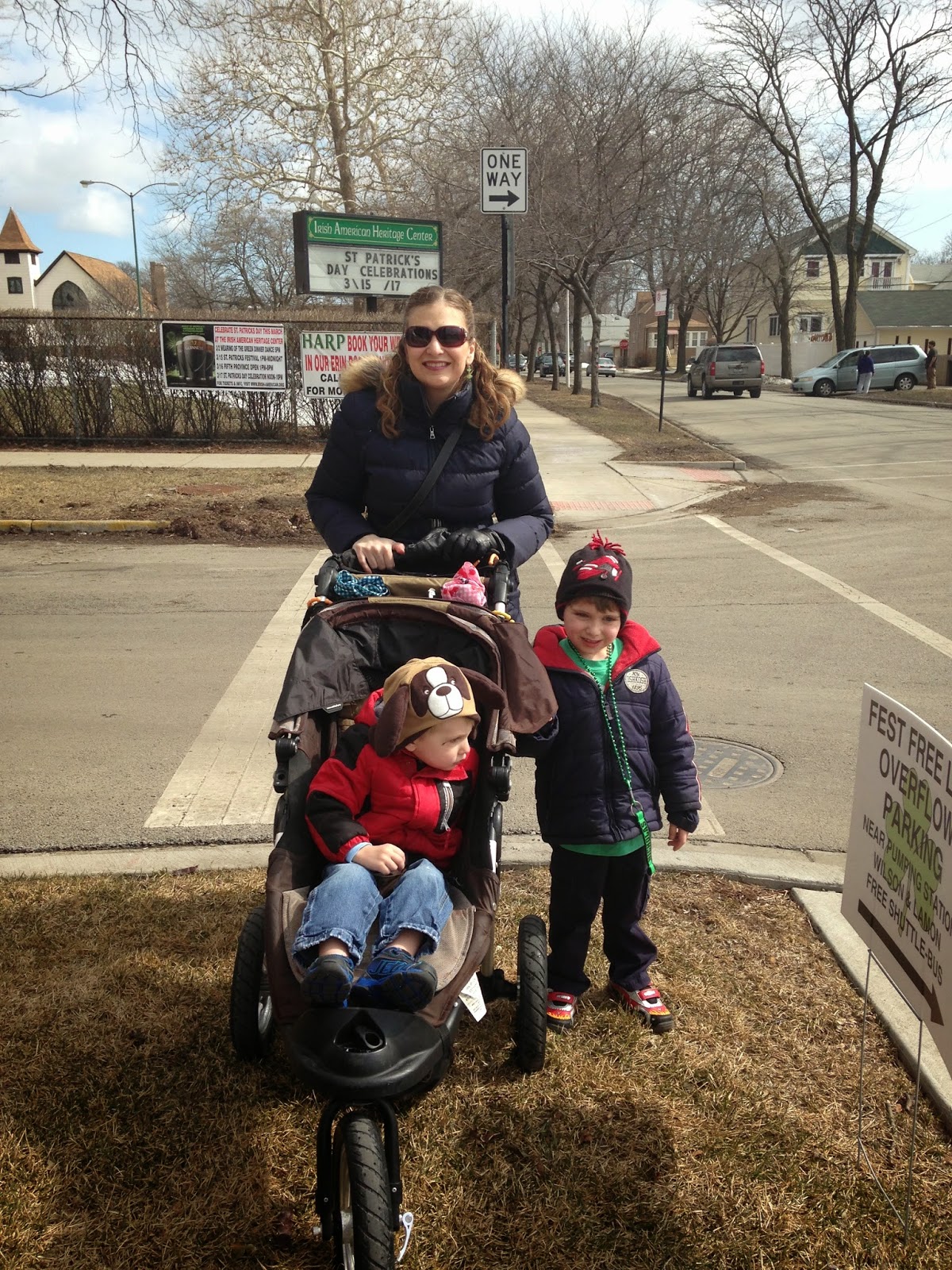 I really enjoy learning about different cultures, and I thought this would be a great way to celebrate St. Patrick's Day. In the past, I've made scones or cookies, and that's about it. Saturday was way more fun than that--we spent the whole day being Irish! 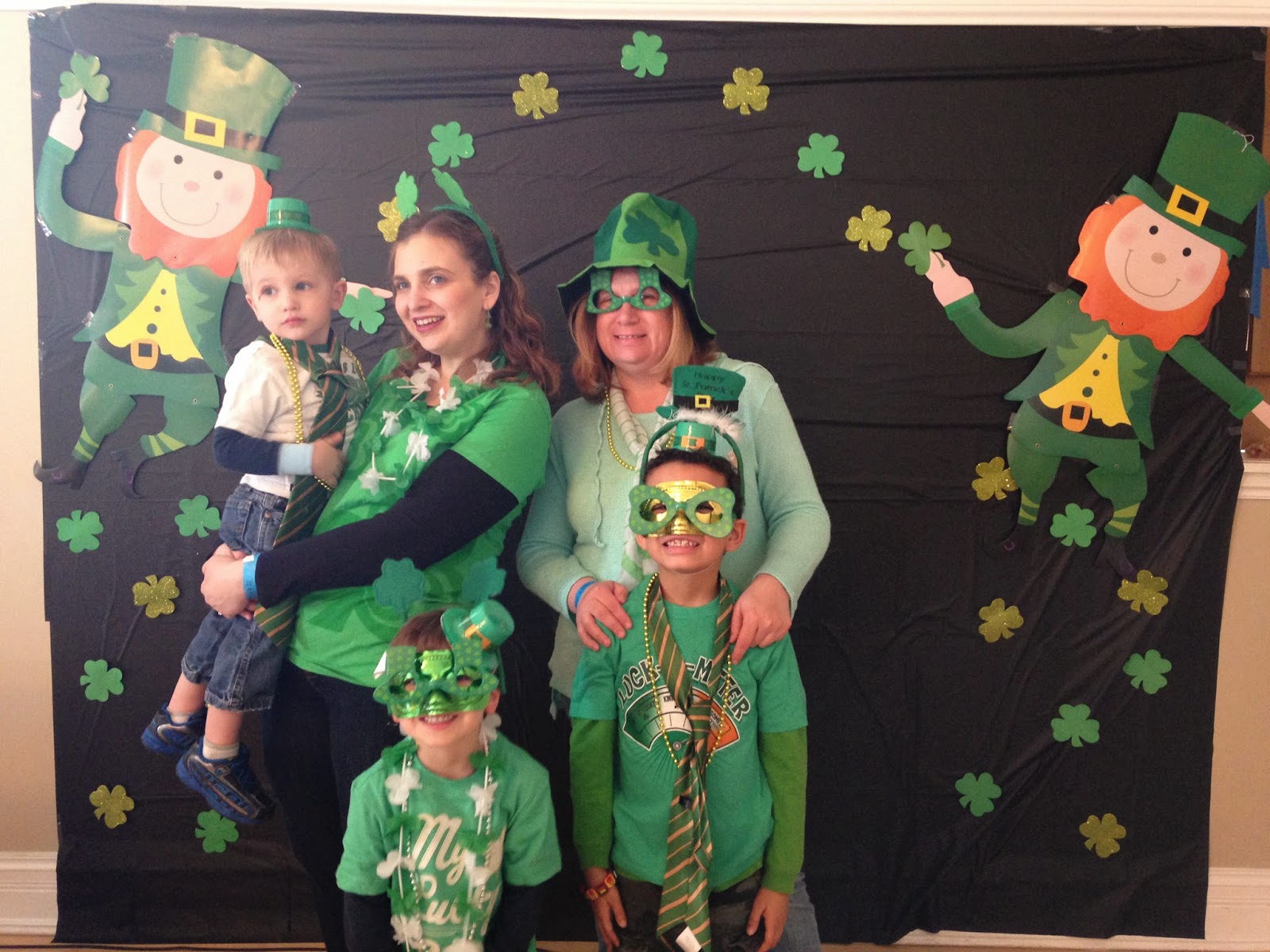 We are not of Irish descent. Greg is German and English, and I am a mutt: I'm more than 50% Polish, and then a big mix of Bohemian, French, Cherokee, Czech, and a tiny bit of Italian. I'm probably forgetting a few European countries. Oh, I do have some Scotch-Irish blood running through my veins, though that isn't necessarily something to be proud of--basically some Protestant Scots moved over to Ireland and lived in settlements for several generations. When they moved to the states, they didn't want people to mix them up with the Catholic Irish who were immigrating, so they qualified their heritage to escape discrimination. Nice of them, don't you think? 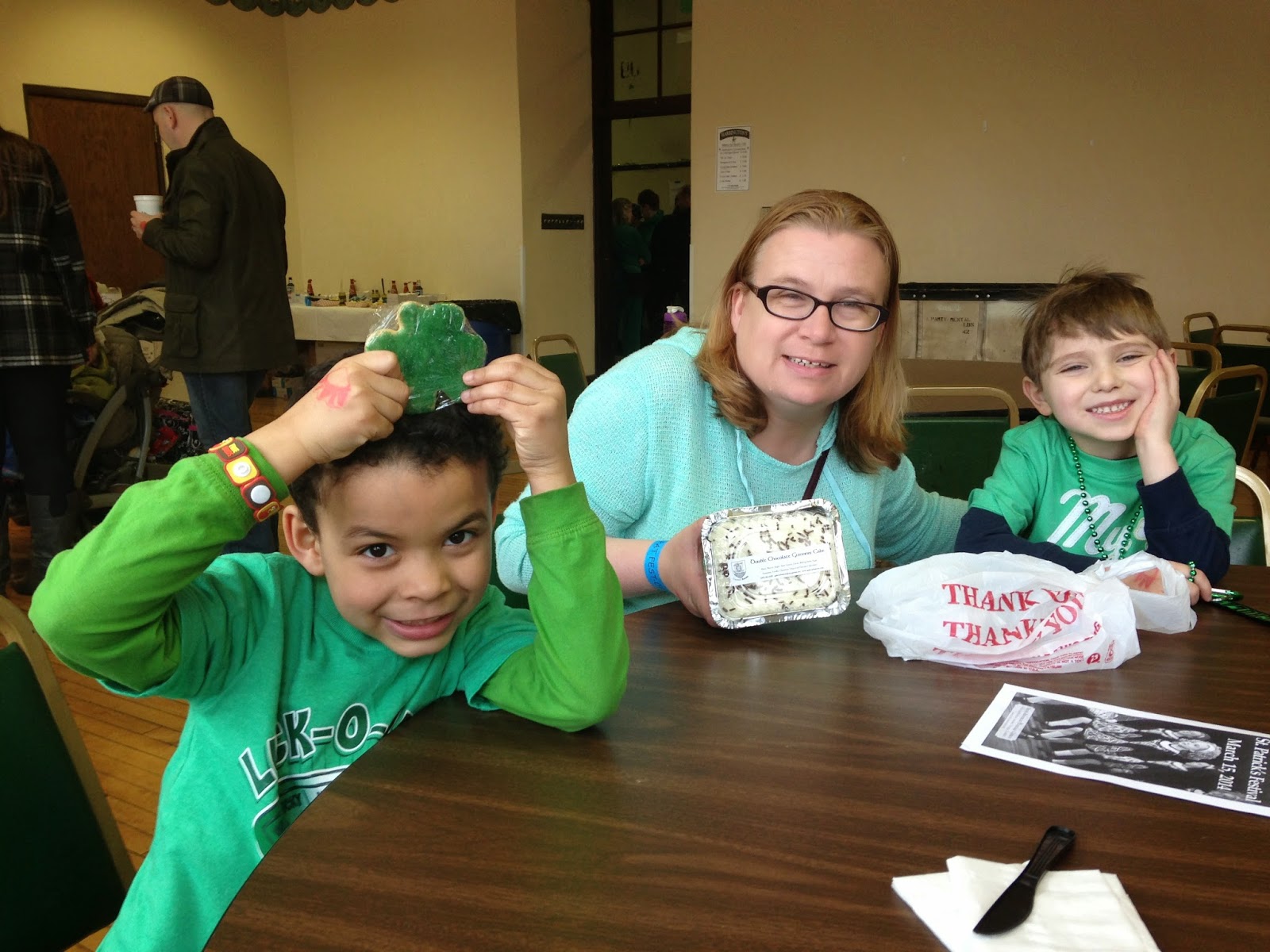 We started our visit with a snack--hey, driving to the city is hungry work. Double-chocolate cake made with Guinness gave an Irish twist to our snack, and the treats we bought from the Irish baker were worth every penny. 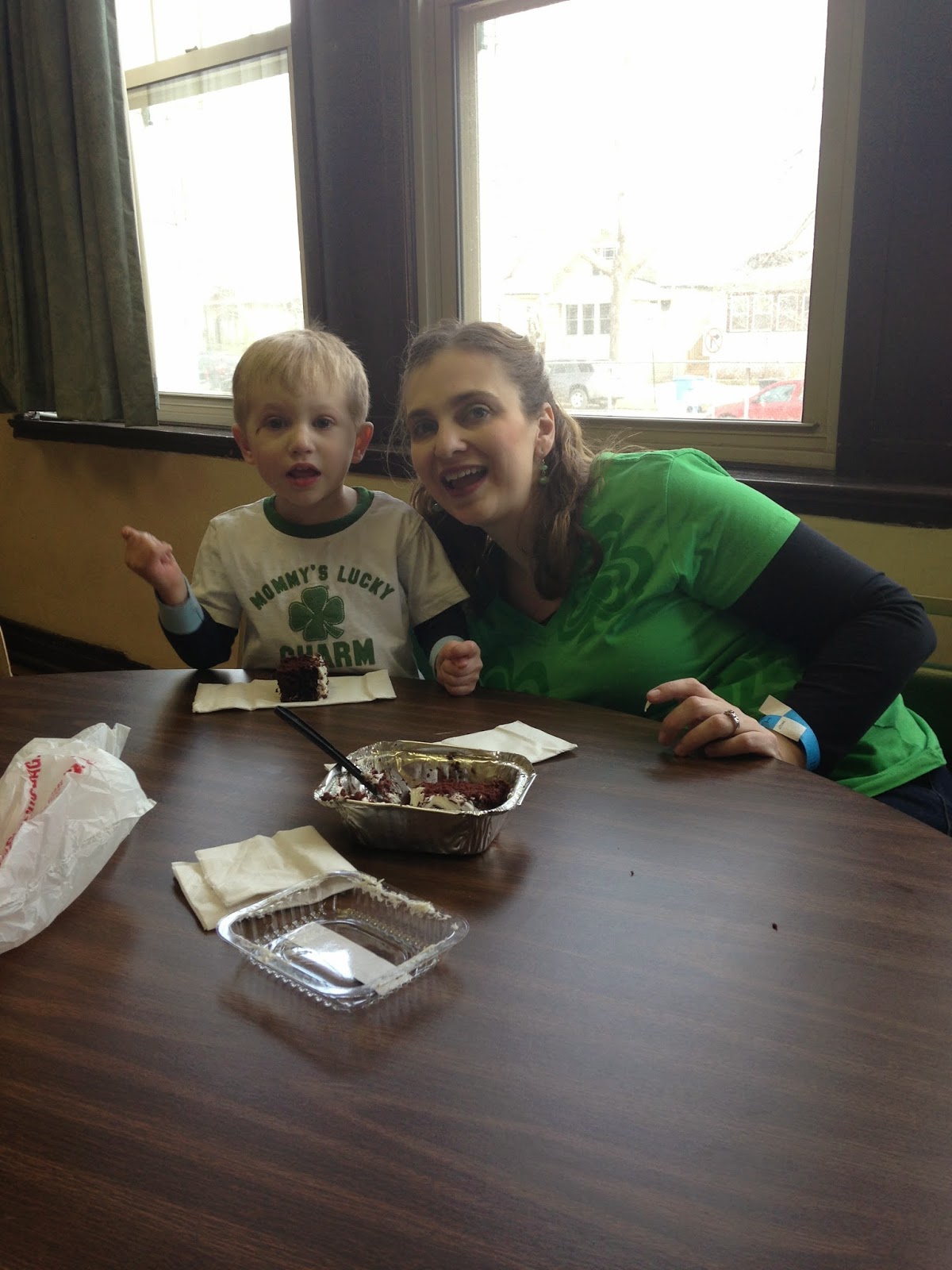 One of the cool things about this festival was the kids' celebrations. There were crafts, a kids' concert, and all kinds of games. Here are the boys waiting for the concert to start. 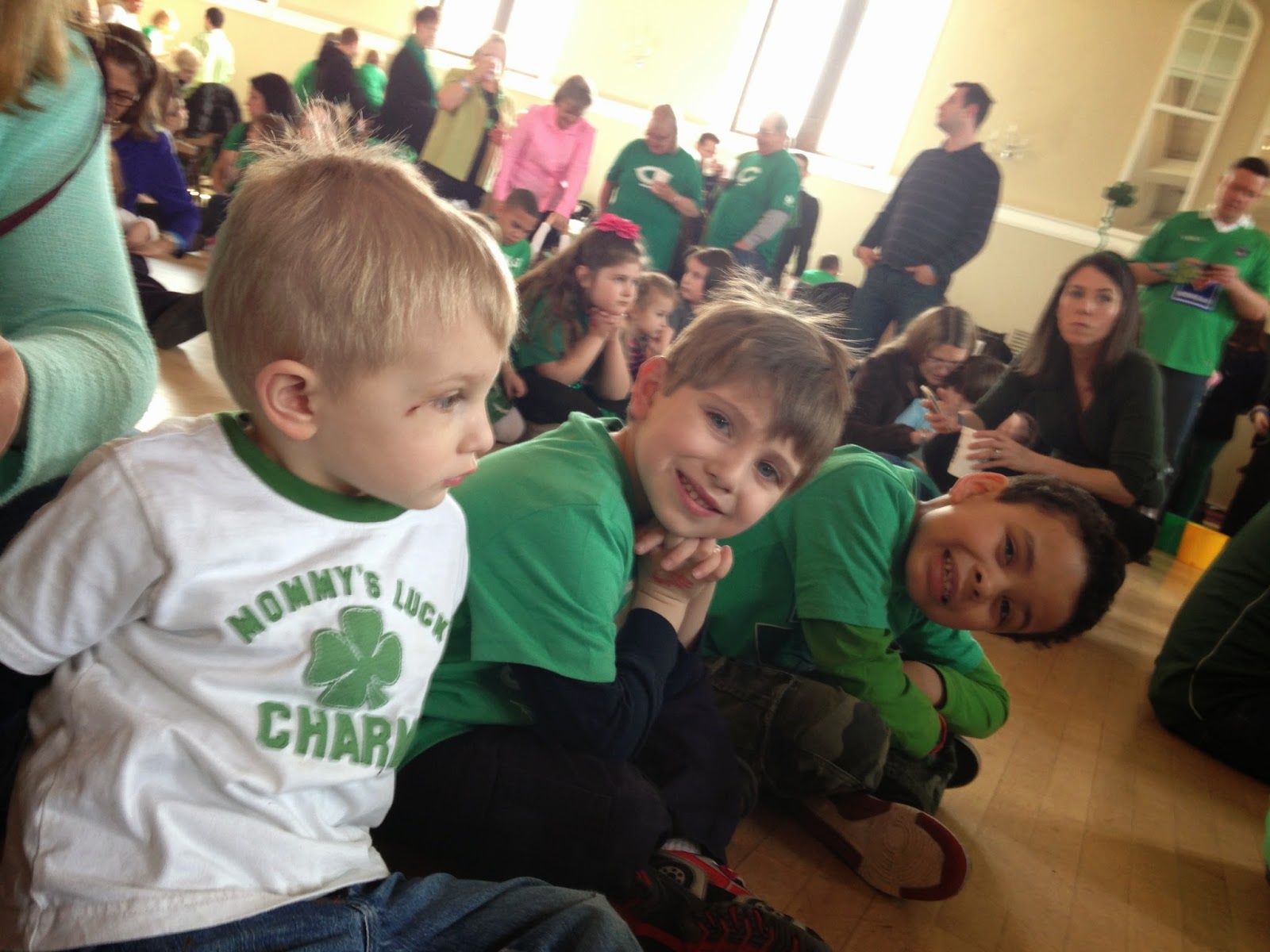 Nick has a bus driver who blasts traditional children's tunes on the trip to school each day, so he has become an expert on every kid's song you can imagine. Henry just likes music, period. 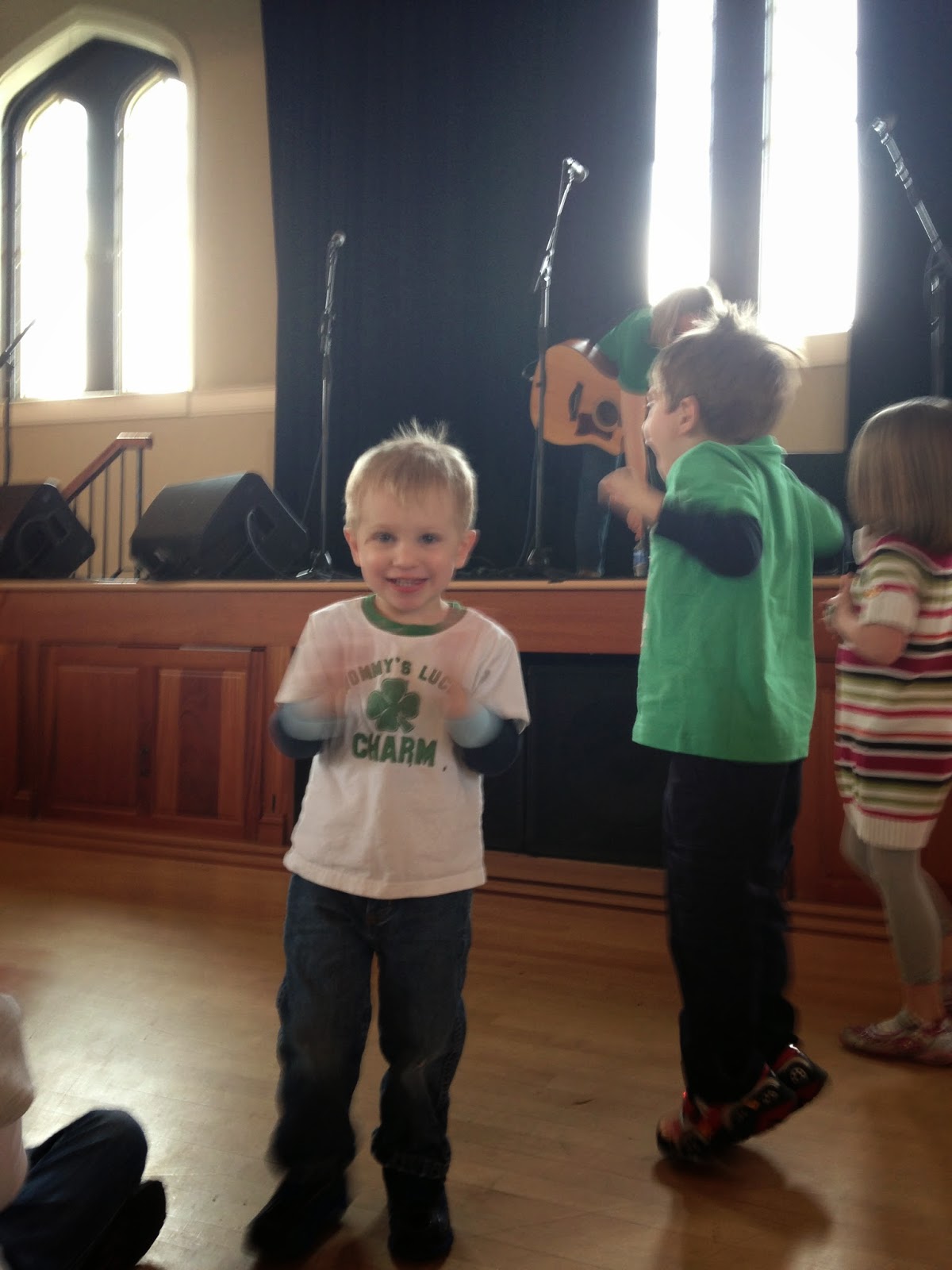 Nick sang along as he and Aidan danced to music from the Wiggleworms. Henry just stared at the guitar player in wonder.

The games were fun for the boys, too, though Henry didn't really "get" the concept of some of them. Pin the Pot of Gold on the Rainbow was a little challenging with a blindfold. 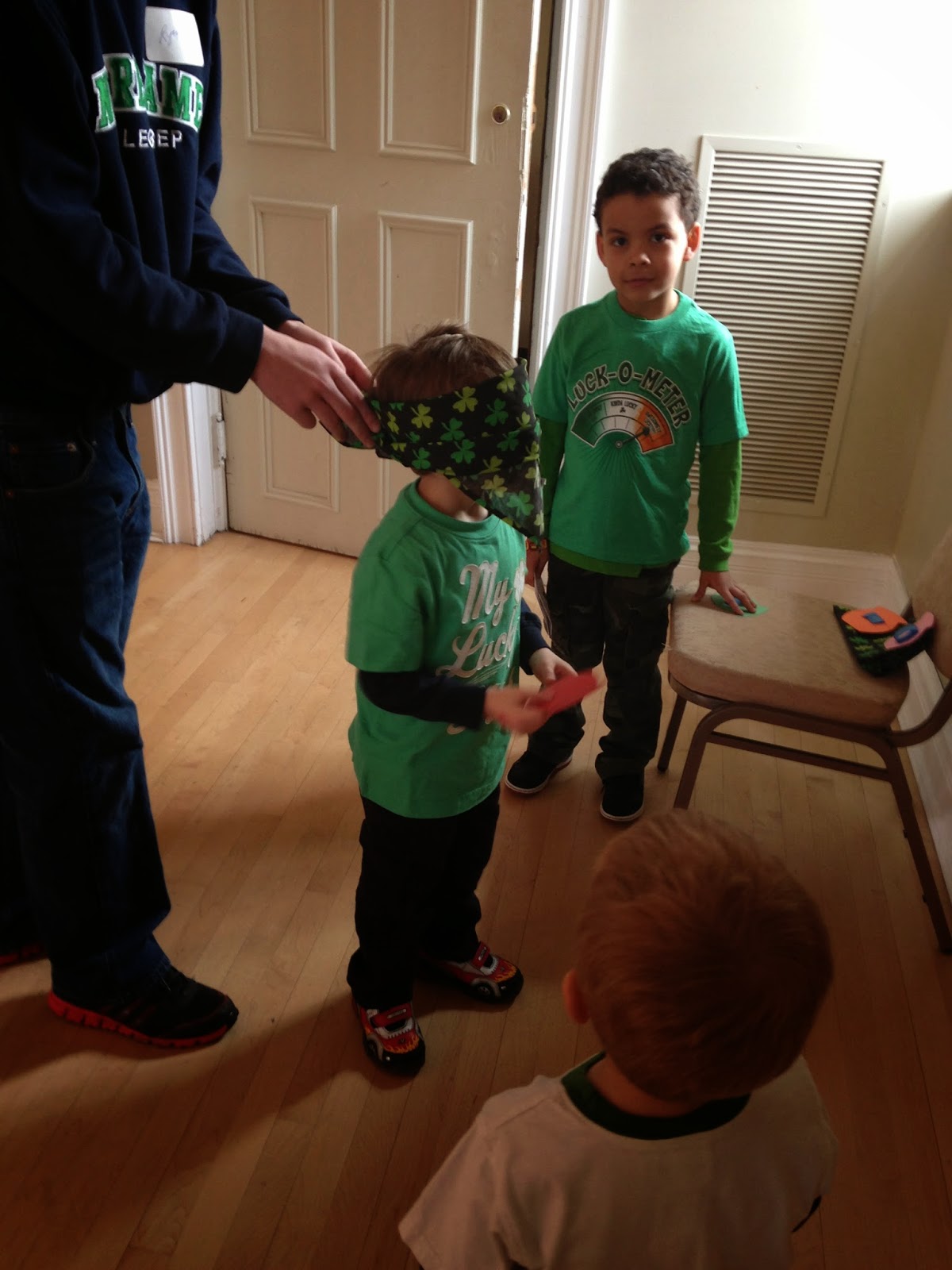 Henry didn't quite understand how to play bags, either. He just climbed up and dumped the beanbags in the hole, then clapped happily for himself. Ahh, well. There will be time enough for rules later, I suppose. 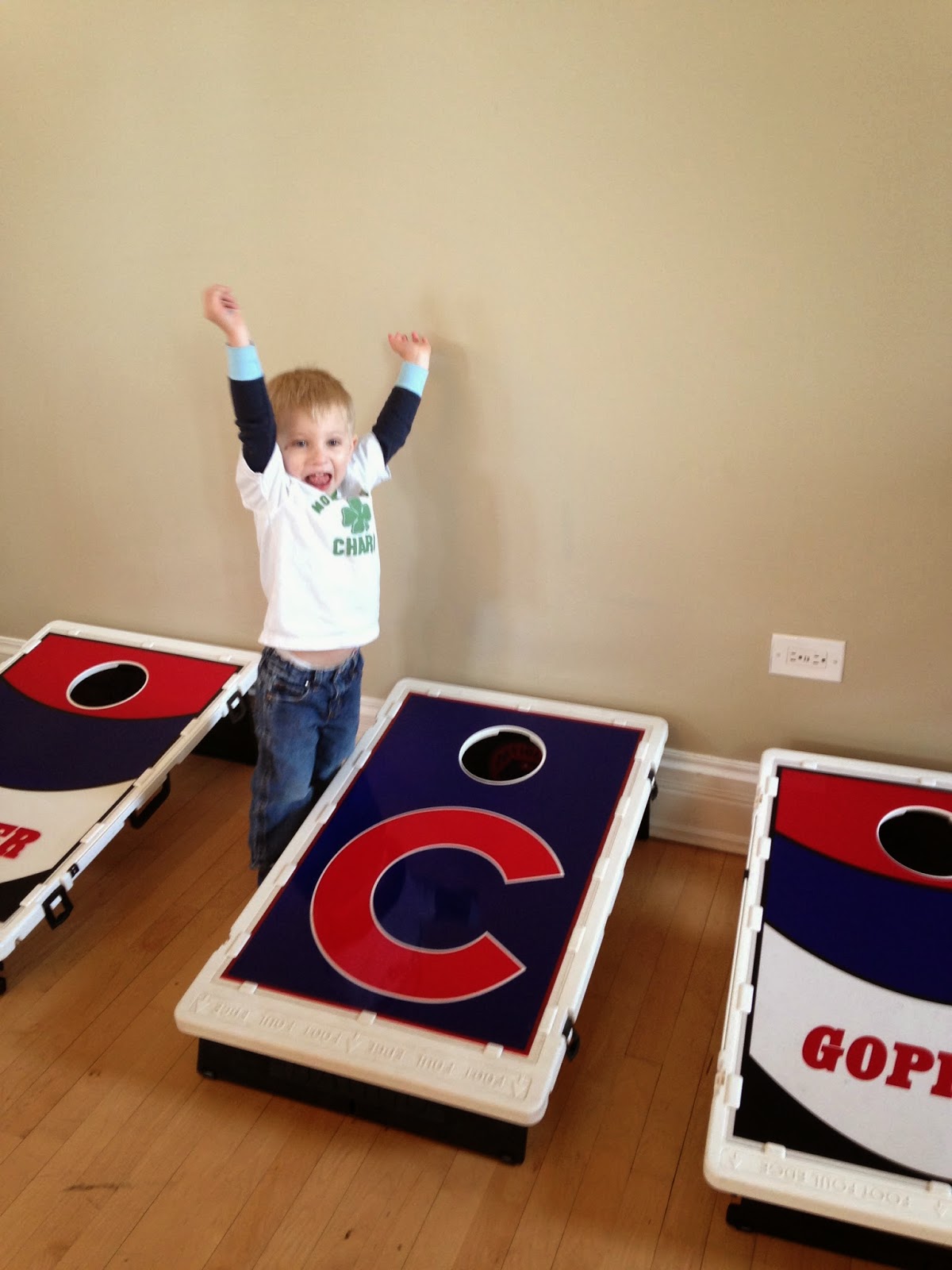 The kids made necklaces, too, and Henry found a cute little redhead. He crawled under the table with her and they played with the beads and string for awhile. I pulled up the tablecloth to make sure he wasn't getting fresh, and both of them acted shocked. 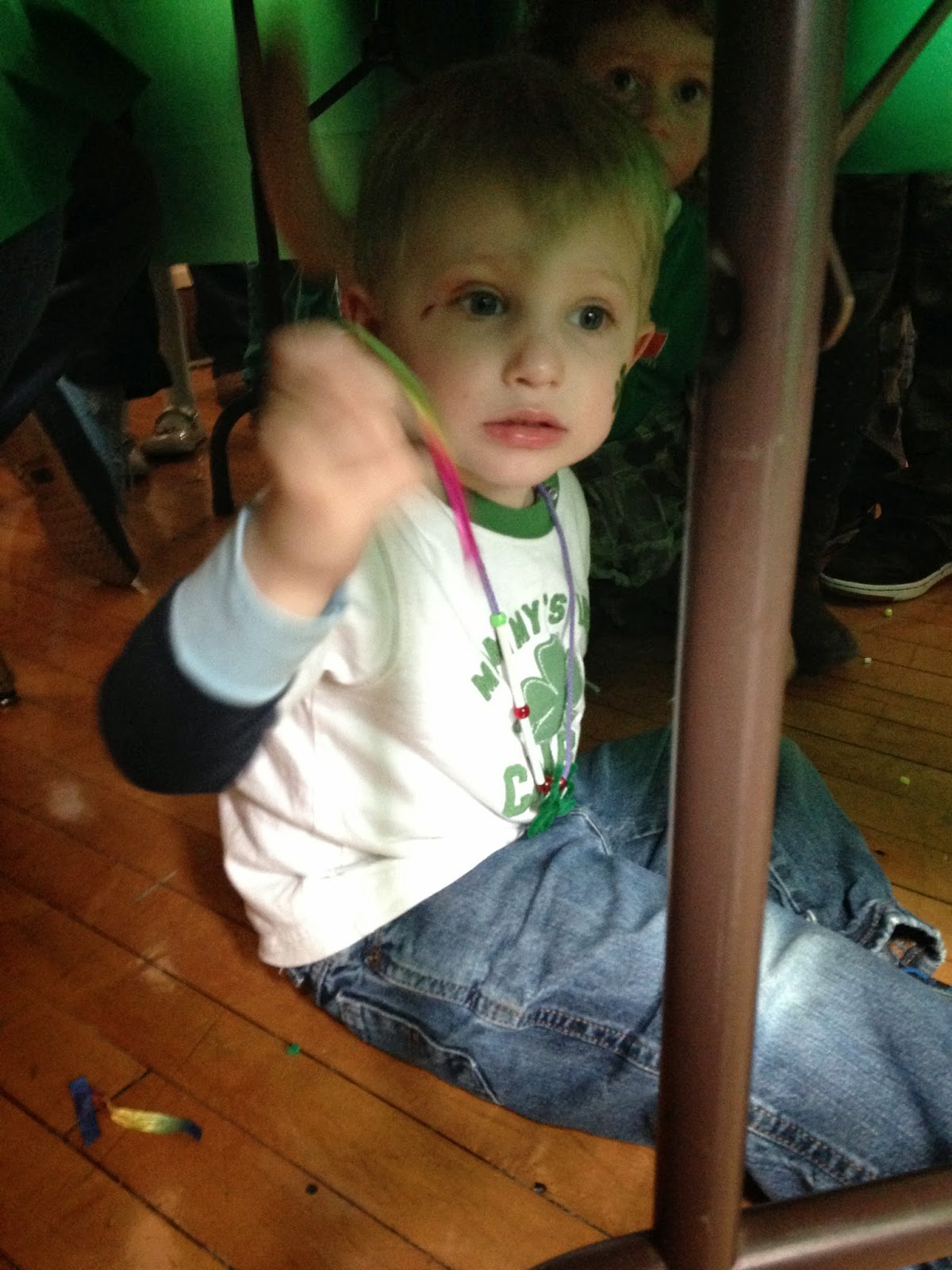 Nicholas was quite proud of his necklace, as well as his cheek-tattoo. 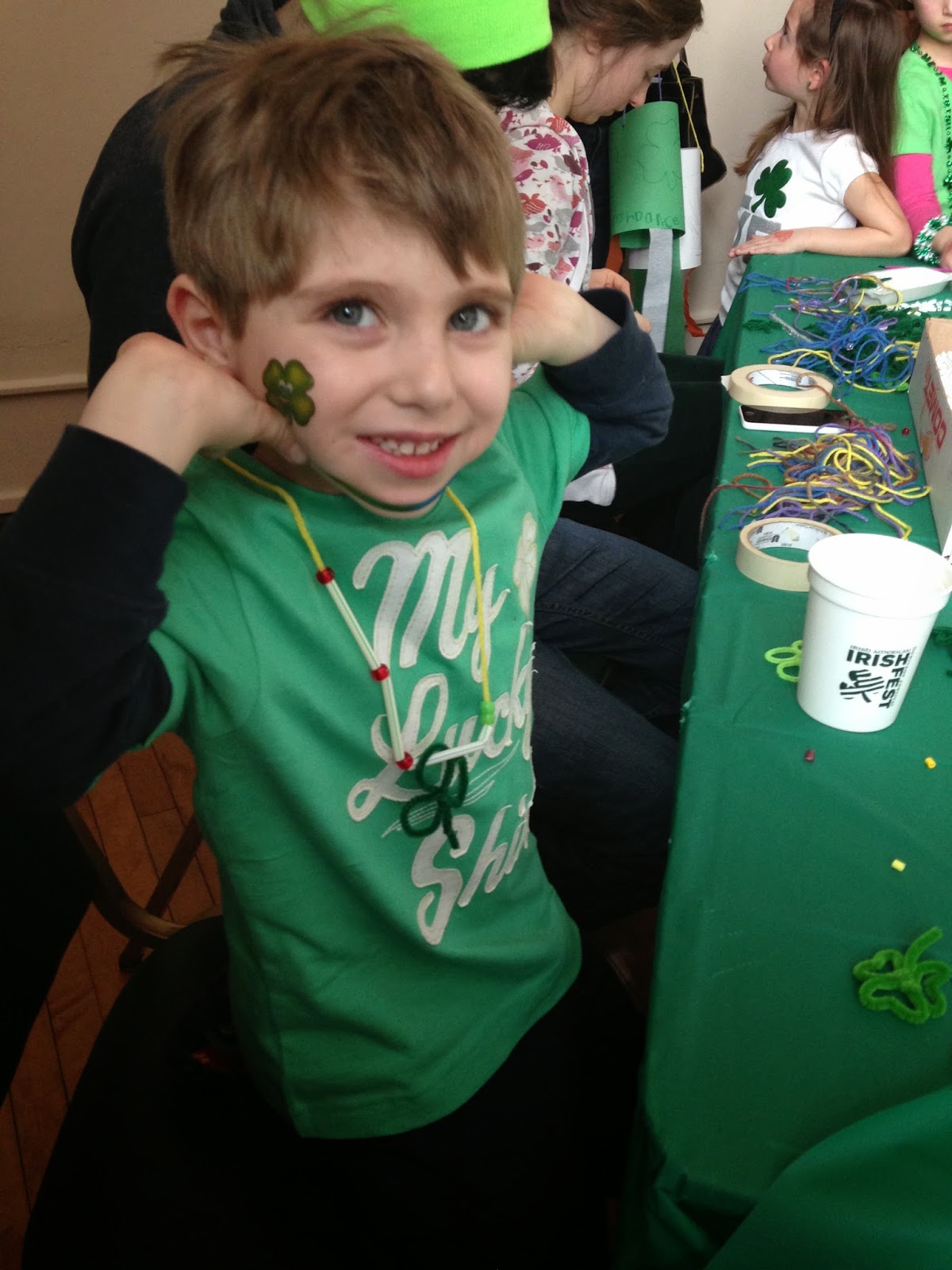 We spent over an hour watching the Irish dancers. I wish I'd taken pictures of the dancers, and of Nick standing next to his chair in the auditorium, trying to copy the steps. It was pretty cute. Then again, so are these two leprechauns. 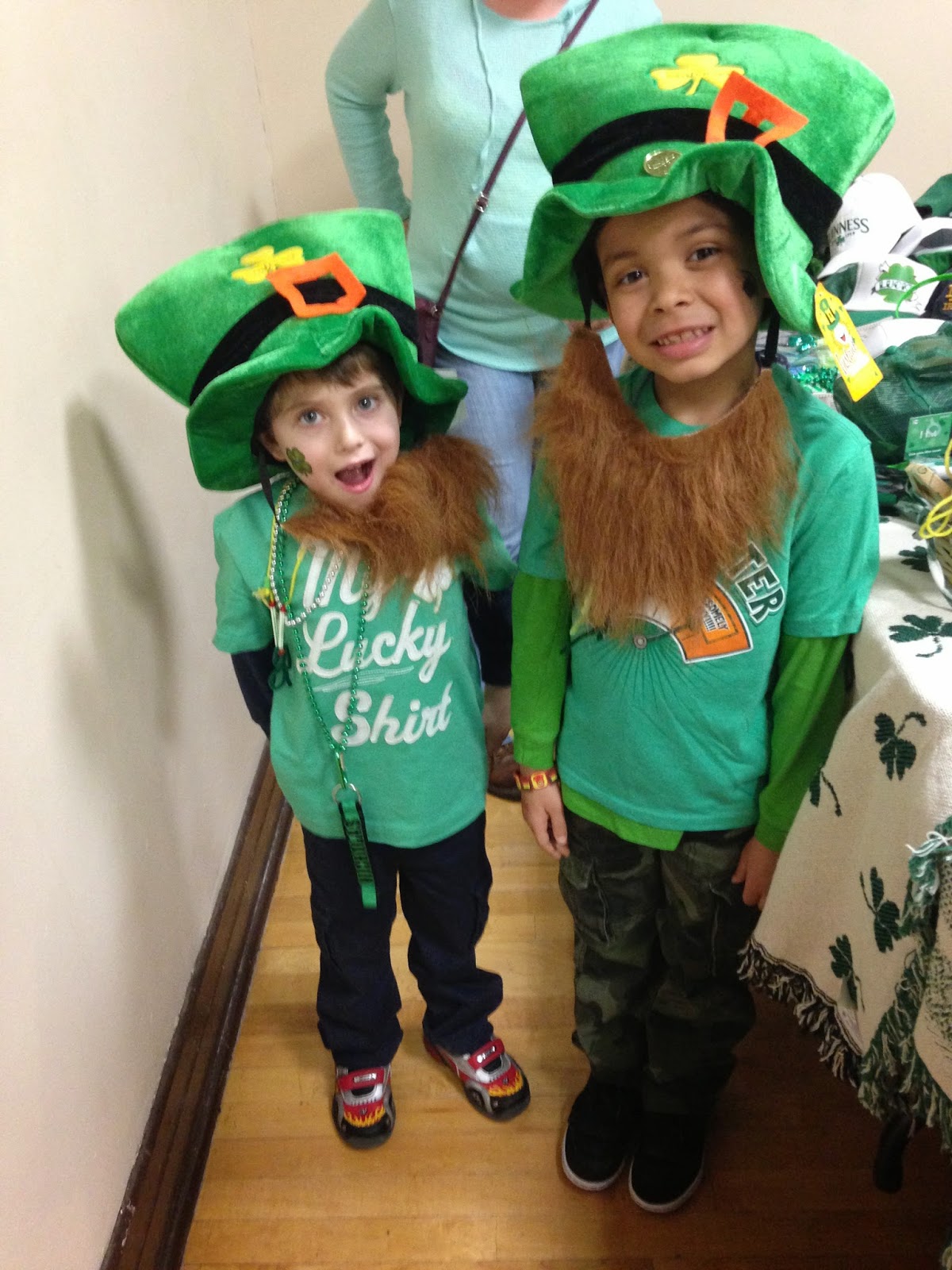 We had a great time at the Saint Patrick's Festival, and I think Nick would sign-up for Irish dancing in a second if we could afford it. He loved the quick foot motions and high kicks.