The Gears Were Turning. . .

. . . at our house yesterday. Something finally clicked, and my children played peacefully together for more than an hour, without adult intervention. It was a Saturday morning miracle! Have my children finally learned to share and play together happily? Or was this a fluke? Only time will tell.


I supervised the entire time, and I can verify that no one screamed, hit, or ripped toys from the other's hand. They talked about which colors should go where, and took turns turning the gears.


I wanted to set a relaxed tone in the house, so I put on some jazz for the boys on our Sirius on the TV. It did seem to calm them down a bit. Their concentration was pretty intense.


We were stranded in the house on Saturday because my car was still being de-rodentified. (I just made up that word.) I guess mice or some other small animal must have crawled into the engine of my car last weekend and ate parts of the engine. I didn't even realize engine parts were edible! Anyhow, I wanted the day to go well, even if we were stuck in the house all day and it was rainy and wet, so outdoor play wasn't possible. Why did this play session work well? Maybe it was the new pajamas from Grandma Toni. She bought them new Star Wars pajamas last week. Or maybe it was the Happy Light.

I usually avoid taking pictures of our Happy Light, since it is an eerily blue light, almost alien in appearance, and it gives weird shadows to my pictures. But it is supposed to increase mood during wintertime, and I do think it works, at least somewhat. The kids refuse to let me turn it off. If I am mad or sad or crabby, Henry insists that I turn it on. "Mommy, you turn on the Happy Light! Happy Light make you happy!

Nope, this is not a picture of Nick about to whoop Henry on the head with the pieces. Instead, they are playing Star Wars with the gear set. Nick was pretending to drive the Death Star, and Henry was driving towards him. At one point, Henry tried to fit one of his little Darth Vaders inside Nick's ship. He told me, "Luke Skywalked in dere. He driving it!" 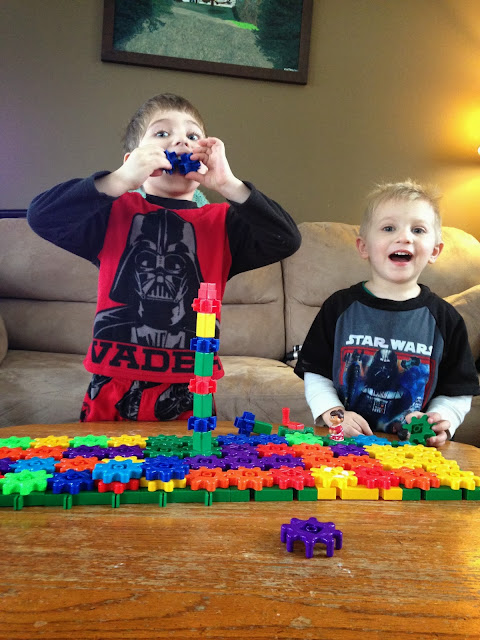 Would you like to know the best part? I actually got the boys to clean up all the gears without any assistance from me. I did, however, use a motivating tool. They wanted to play with the ipads, and I told them only when all the gears were picked up.

I don't have very many days without fighting in my house. I want to remember this one and try to replicate it. The only problem is, as a scientific experiment, I had way too many variables to figure out which one caused the positive behaviors. Was it the Star Wars Pajamas, the Happy Light, the Jazz in the background, or the proximity and supervision without direct intervention? Were the stars in alignment? I'm hoping it is just that all of my mini-lessons on sharing, taking turns, and role-playing proper sharing techniques are finally sinking in. I'm keeping my fingers crossed.
Posted by Melissa E. at 7:47 PM