Random Musings on a Friday Evening

I was going to write a blog post about our trip to the museum last Sunday, but inspiration just struck after an interesting afternoon and evening with the boys. Clarity sometimes comes in the strangest of places. . . like in the aisles of the Costco after a long day of testing at work. 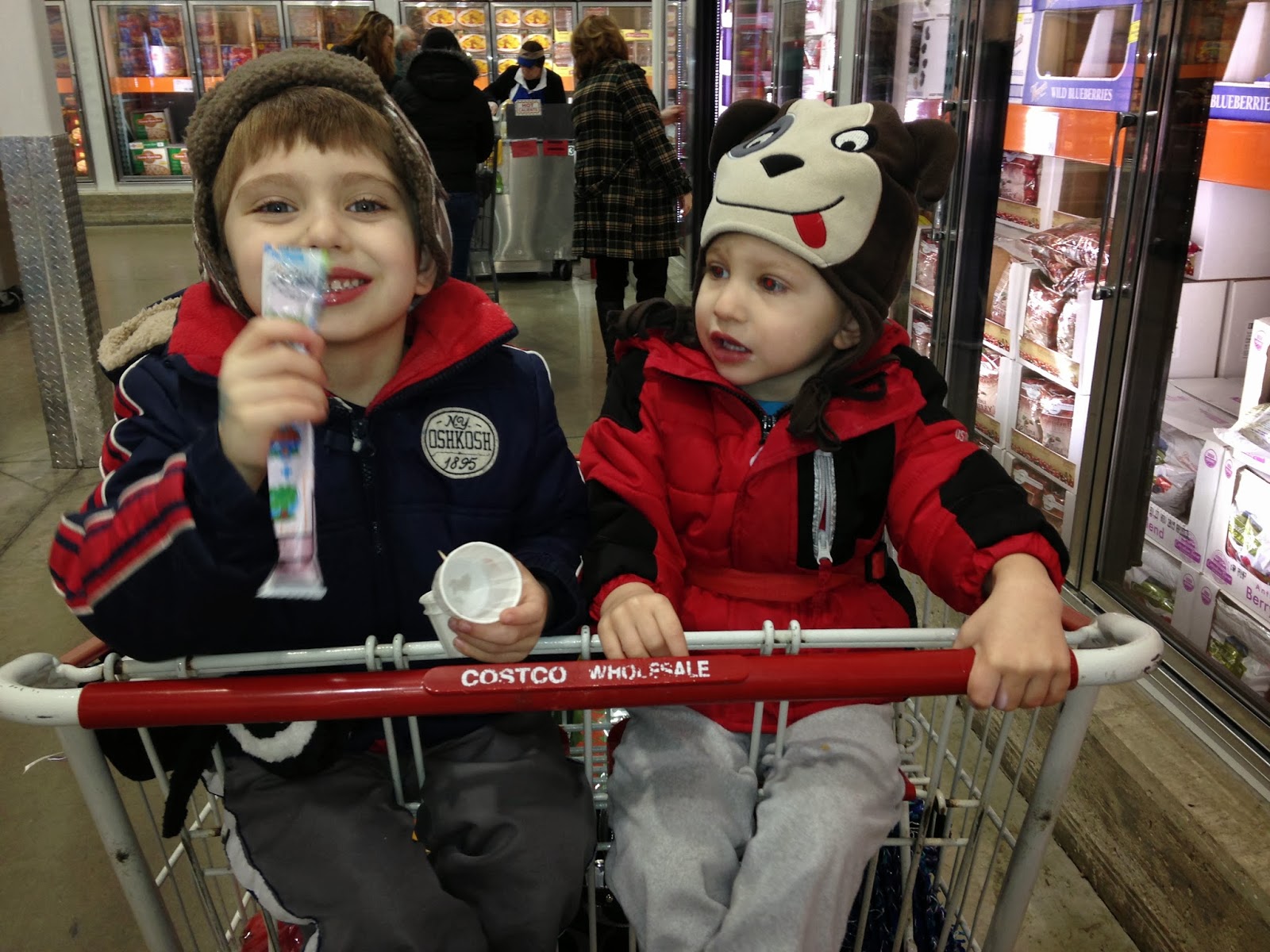 We started out at the Costco, where I went in for two items: Vitamin Water and a passive aggressive giant bag of broccoli florets.

You see, my husband has been doing the grocery shopping lately. He insists that Meijer does not sell frozen broccoli florets (or that he cannot find them, or that they're too expensive). For some reason, this grates on my nerves because neither the boys nor I will eat broccoli pieces. Greg says he doesn't mind the broccoli chunks, so every time I've made broccoli lately I give the boys and myself the "trees" and serve Greg up a giant pile of stems. (Since he doesn't mind them, you know.) Anyhow, this good-humored broccoli war has been going on for months, and I was determined to have the good broccoli. I found it at Costco for $6.49 for a 4 lb. bag of organic. Niiiice.

Everything was wonderful until we ran out of samples.

My children make any trip more interesting. During our slow, snowy ride home, there was a tickle fight, Henry took off his shoe and threw it at Nick, and periodic shrieks pierced the tiny interior of my Sebring. We had an argument about the meaning of the song "Riders on the Storm" by the Doors, which was strangely appropriate as we inched along through the snowstorm. Nick wanted to know how they rode their bikes through the storm. I tried to explain, but drug-induced lyrics are difficult to explain to a five-year-old. Technically, they'd be riding through the storm. "What about if they rode on airplanes?" said Nick? "They'd still be riding through, or above the storm, not on the storm. Great philosophical conversation, anyway. I want to remember inching along in the snow, listening to both boys attempt to copy Jim Morrison's voice as they sang their little hearts out. 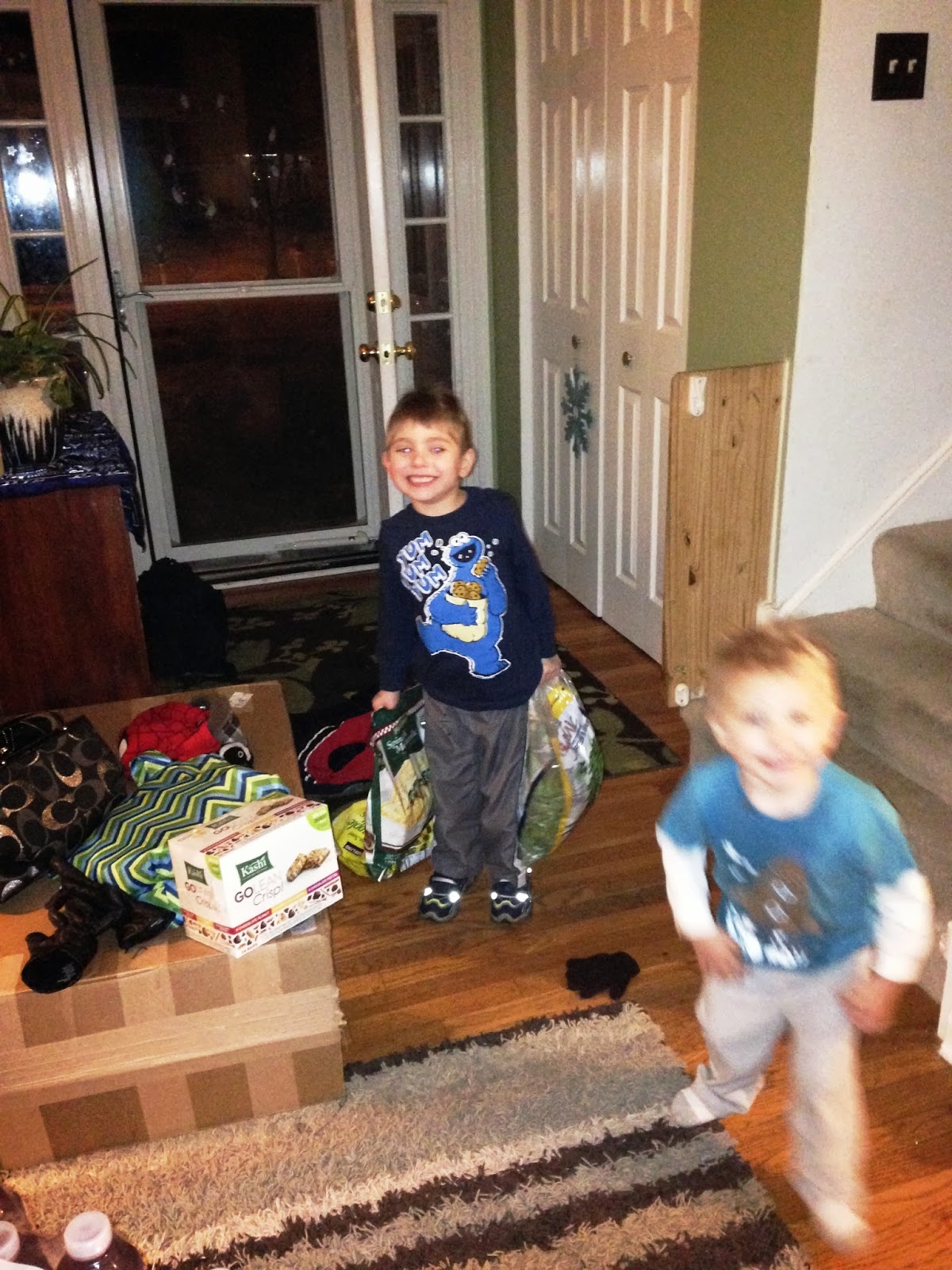 When we arrived home, Nick wanted to show me what a good helper he could be. He ended up stacking all of the groceries in a 3 foot high tower that collapsed, spilling my leftover coffee all over the carpet. Ah well, you cannot expect a five-year-old to help without secondary consequences.

Lately, I've been trying to exploit Nick's extra energy for useful purposes. He actually brought in all of the boxes and frozen veggies, including the aforementioned passive-aggressive broccoli. 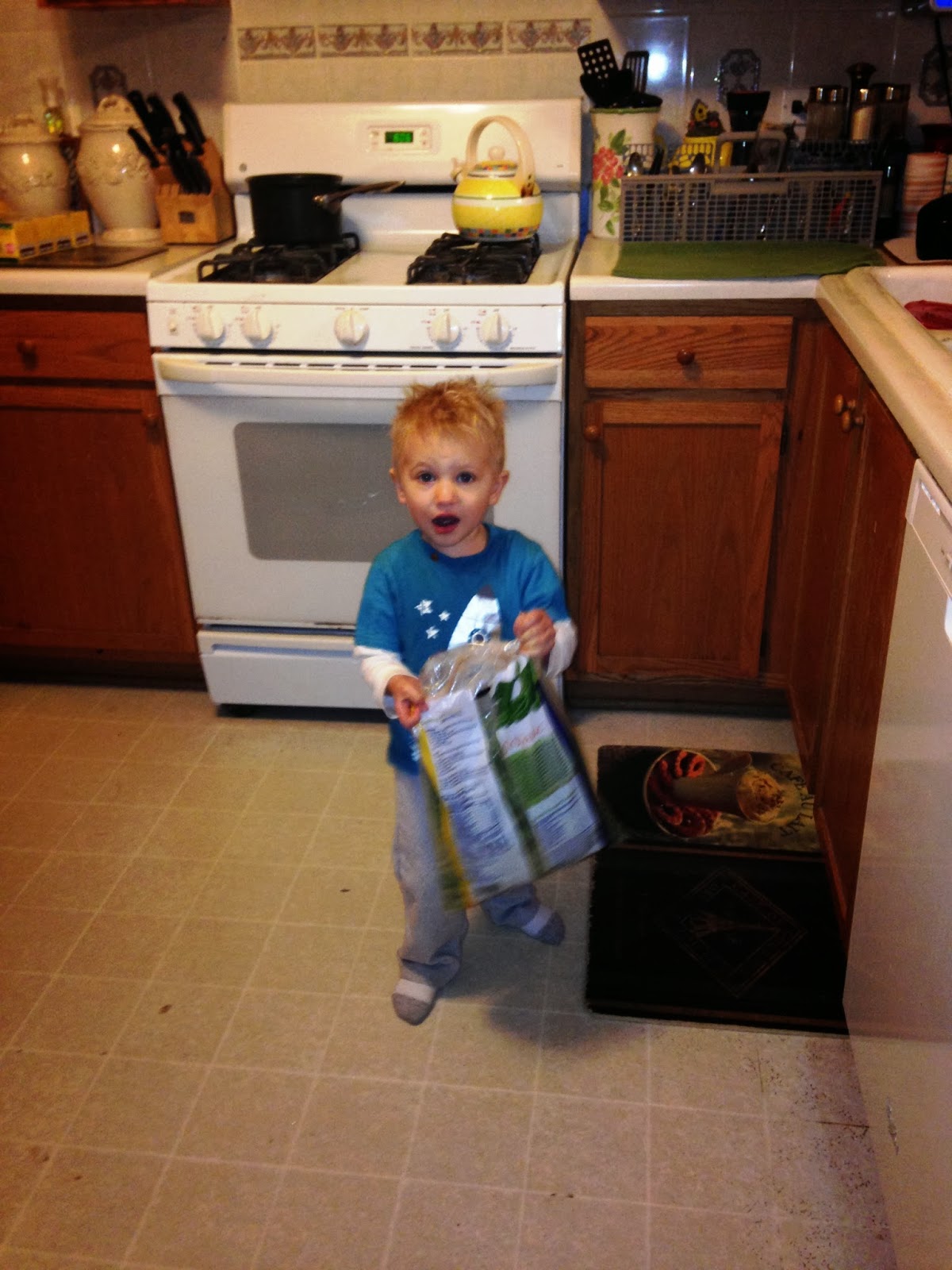 Henry helped, too. He even tried putting the frozen green beans into the freezer for once, instead of stealing things out of it!


Best of all, Nick had a surprise for us when we got into the kitchen. He'd gotten a special certificate from his teacher for being a good helper. We were duly impressed.

We celebrated Nick's success with a special dinner of cucumbers dipped in thousand island dressing, leftover chicken, and granola bars dipped in chocolate. My boys can't eat cucumbers without making them into different phases of the moon and declaring the phase of their creations. "I made a half moon!" "My moon is a crescent moon!" "I like full moons best." (That last one was from Nick, who, coincidentally, has quite interesting behaviors during full moons.) 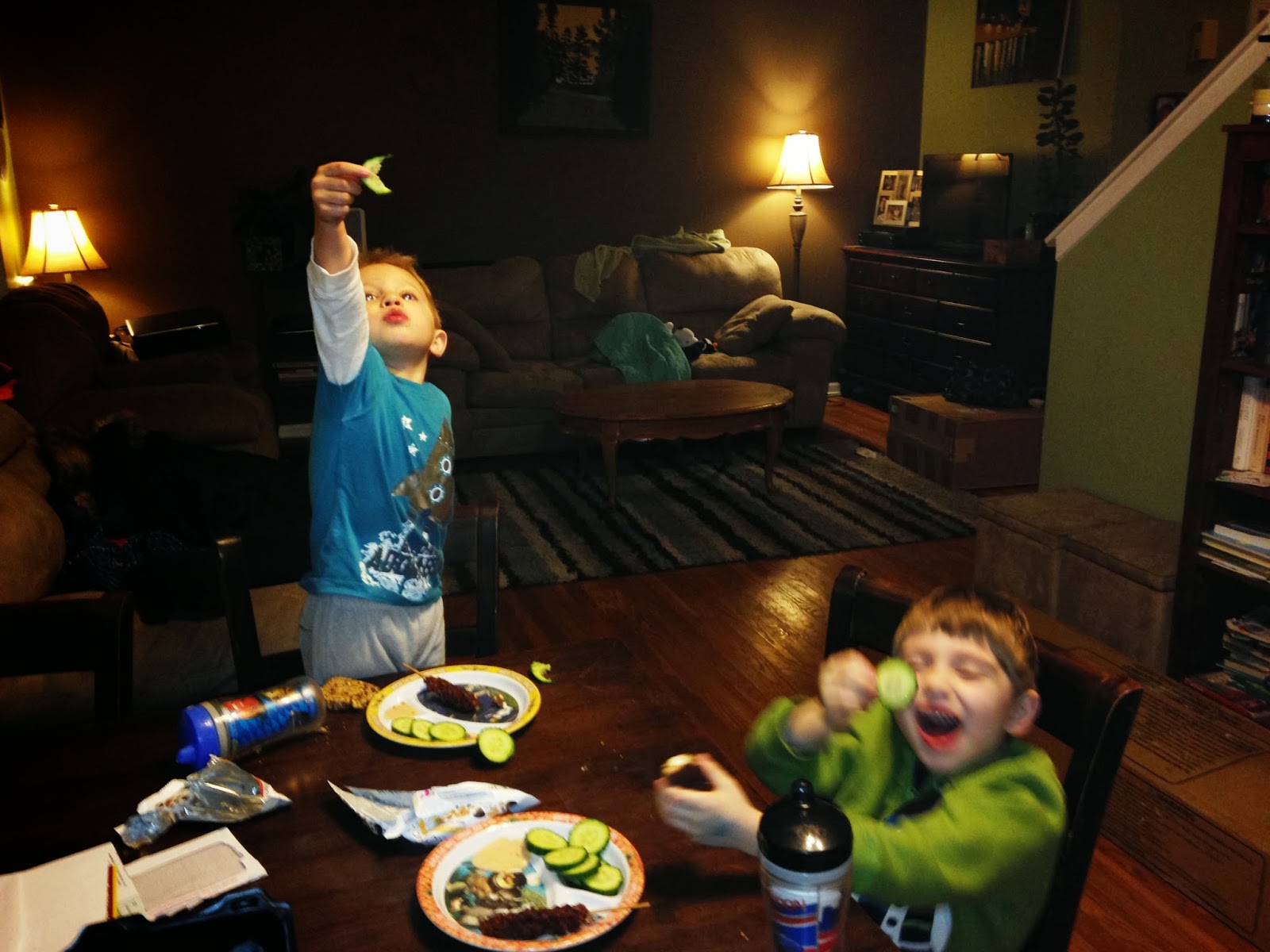 I do not think my life will ever be boring with two little boys around. Tonight, I felt pretty thankful for that, even though I am doomed to never have a toilet paper holder because it is forever being stolen to use for a light saber. Happy Friday everyone. 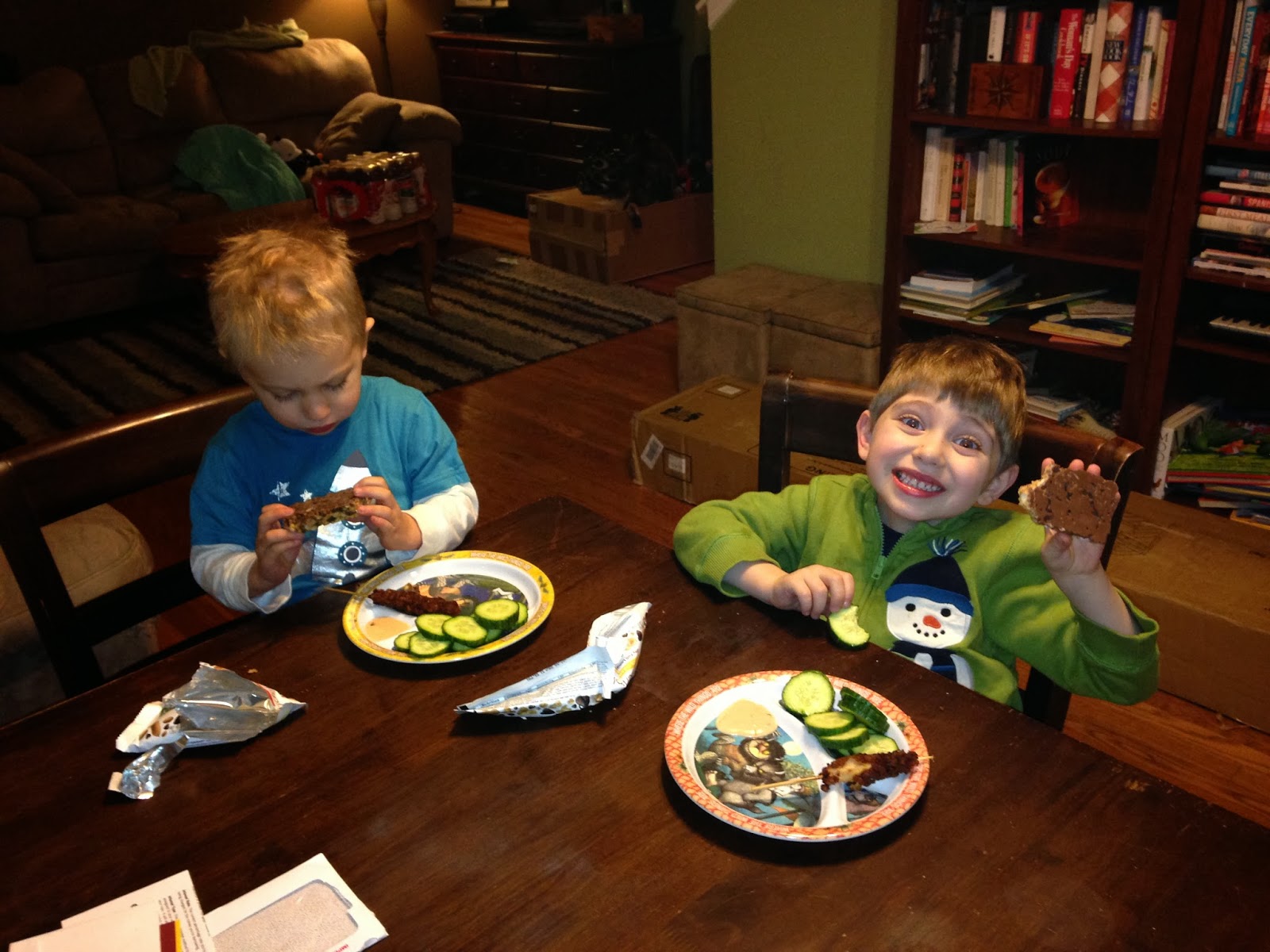